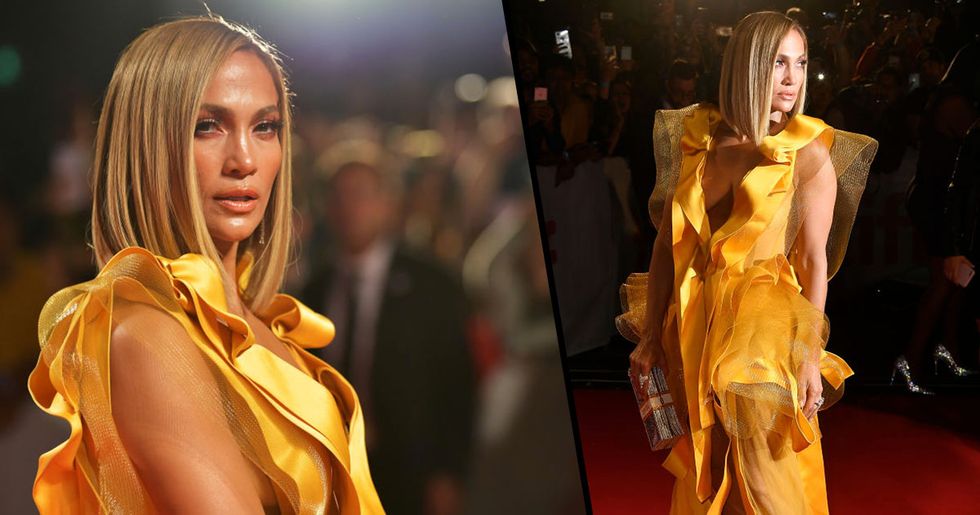 Everyone Said the Same Thing About J-Lo at 'Hustlers' Premiere

J-Lo sure isn't one to play down her diva persona.

The singer-turned-actress-turned-businesswoman-turned-whatever-the-heck-she-wants-to-turn-her-hand-to, made headlines this week. Stepping onto the red carpet for the premiere of the crime comedy-drama, Hustlers, Lopez made waves for her choice of fashion accessory.

J-Lo stars in the new movie alongside Cardi B, Lizzo, and Constance Wu. It's set to be a knockout success and certainly a movie for the badass ladies out there.

Continue scrolling to see why J-Lo is such an icon, exactly why J-Lo's choice of accessory was perfect, and what everyone's been saying about it.

Of course you remember this look. J-Lo scandalized onlookers with this revealing one piece.

That's none other than Sean Combs, also known as "Puff Daddy," but he brought nothing but trouble for J-Lo, so we don't talk about him.

Is there anything that J-Lo can't wear?

As J-Lo stepped on the scene of the 2018 Met Gala, everyone's heads turned to watch her do her thing in front of the cameras.

We know, we know, J-Lo is obsessed with exposing one leg.

I think you get it, J-Lo's always looked great.

Now, these three rules are a crucial part of her routine.

To some, it may be a little extreme, but they really do the trick. J-Lo can vouch for that.

According to Lopez, she hasn't had caffeine "in years!" I wish I had that kind of will-power.

The singer expressed that alcohol really ages the skin as you grow older, so she avoids it.

And, finally, she doesn't smoke either. Smoking releases so many hazardous toxins into your body, so it's no wonder that she avoids that. It's key to her youthful and radiant appearance.

And these skincare tips will also save your skin.

According to People, J-Lo has been a proud promoter of glycolic acid as it helps "to get that healthy glow and clear skin."

Taking off your make-up at night also helps.

This is a tip that echoes around the beauty industry, but now that J-Lo has confirmed it, we need to stick to it. I get that, some days, you might be tired and your bed is calling your name, but, just think about it, when you're fifty, your skin will thank you for cleansing.

Having the right amount of sleep is also an important factor in maintaining a healthy lifestyle.

Yes, you've also heard this one before, but it's so important. Lopez ranks this at the top.

"The number one tip is to always get enough sleep. I can’t stress this enough."

"Ideally I would love to get nine or 10 hours of sleep, but either way, I always make sure I get at least eight." I mean, if she can find the time to sleep with her busy schedule, you can too!

And, lastly, we have meditation.

Going about your hectic life can be extremely tiring, so make sure you take the time to relax and center yourself!

Jennifer started meditating regularly back in 2015 and hasn't stopped since!

She told Well + Good that: "It sounds like such clichéd bullshit, but it's not; age is all in your mind," so she tells herself that she's "young and timeless" everyday!

We owe a lot to Jennifer Lopez...

From the iconic bops to the tips to help us look as amazing as her, J-Lo has provided us with a lot of joy. And just look at those abs!

But it's not J-Lo's impressive physique that drew attention at the Hustlers premiere...

Far from it, everyone was so distracted by J-Lo's accessory that her physique didn't even get a mention by those commenting.

They weren't talking about the fella on her arm either...

J-Lo attended the Toronto International Film Festival screening of Hustlers with retired baseball star, Alexander Rodriguez. The pair have been dating since 2017.

J-Lo and Alex Rodriguez are certainly getting close...

J-Lo is very open about her relationship with Rodriguez on her Instagram account. In July, she posted this sweet snap of Alex wearing matching pajamas with J-Lo's son, Maximillian Muniz. J-Lo had Maximilian with the actor and singer, Marc Anthony.

J-Lo and Alex Rodriguez announced their engagement in March.

Rodriguez posed in the most romantic way, getting down on one knee as the sun went down on a desolate beach - I mean, desolate except for the photographer that obviously took the pics...

Rodriguez has certainly become one of the family.

J-Lo deserves nothing but happiness and it's nice to see that she's finally met a man that is able to give her everything.

But, I mean, an Oscar would be nice too, right?

Rumor has it in the Academy Awards rumor-mill that J-Lo might be up for an Oscar for her latest role in Hustlers.

She delivers the performance of a lifetime.

Lopez plays the role of Ramona. Her character is an ex-stripper and the movie follows her, along with her ex-stripper pals, as they hatch a plan to, as put by IMDb: "turn the tables on their Wall Street clients." Sounds good, doesn't it?

True to her Hustlers character...

J-Lo decided to hit the red carpet with a clutch made up of $100 dollar bills.

She's been rocking this fancy clutch since she started filming the movie.

Making a nod to her character, Ramona, in an Instagram post that she shared in April, J-Lo showed off the rhinestone-studded clutch.

Did J-Lo "borrow" the clutch from the movie's prop department?

Eagle-eyed fans have taken to Twitter to suggest that J-Lo might have swiped the $100 dollar bill rhinestone clutch from the set of the movie.

But who cares when she's just given us the performance of a lifetime?

the word is out on how sensational HUSTLERS is; now it's time to acknowledge what a huge talent Lorene Scafaria is.… https://t.co/L7W7ADHifq
— David Sims (@David Sims)1567967830.0

There's no denying the Oscar buzz around J-Lo since the release of the movie.

They completed the movie in how many days?

Honestly, it takes me about that long to tidy my room.

J-Lo gets what she wants.

And no one will be able to argue that Lopez didn't have a huge role in what we are anticipating to be the huge success of this picture.

We can't wait to see her walk away with that Best Supporting Actress Oscar. For more (this time, adorable) J-Lo content, keep scrolling!