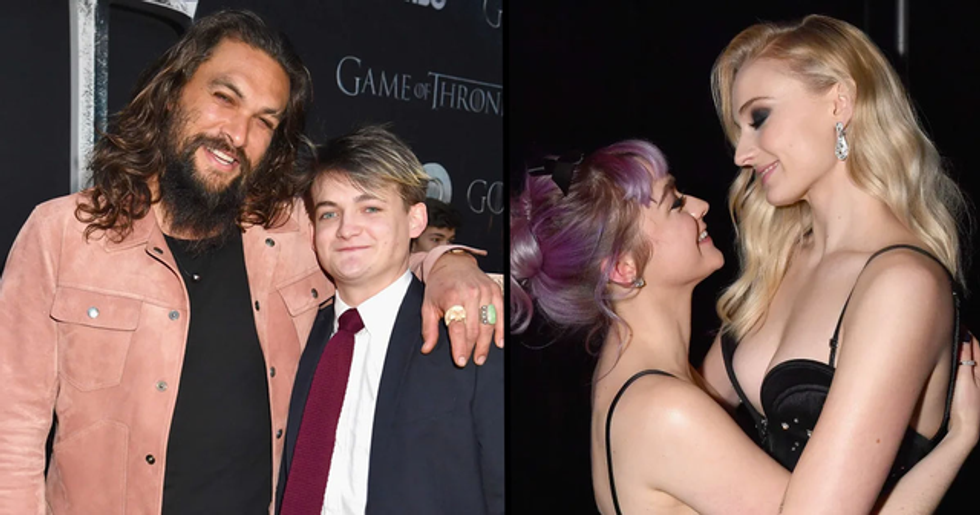 Game Of Thrones is one of the most popular television shows of all time - which makes the fact that it's coming to an end a little too much for some fans to bear. As the show's eighth and final season approaches, the tension is getting higher and higher. We're all hoping for a satisfying conclusion as to who is going to sit on the Iron Throne, and what's going to happen when the humans inevitably face the White Walkers.

The premiere of the eighth Game Of Thrones season took place this week, and it's safe to say it was as epic as the show itself. The internet has gone crazy over the pictures of the myriad of stars. But to many, there was one thing in particular which stood out about the snaps - and people can't stop talking about it. (Beware, those that aren't all caught up yet! There may be a few spoilers in here for you!)

We've got all the pics and the internet's best reactions right here, so enjoy!

Game Of Thrones is a truly epic television experience.

It first aired in 2011, and since its premiere, the show has only gone from strength to strength, gaining both a humongous viewership and critical acclaim.

It tells the epic story of a battle for power.

In Game of Thrones, a set of different families fight over who has the most righteous claim to the throne, and control over the rest.

It's primarily set in the fictional land of Westeros.

But one of the biggest strengths of the show is its mirroring of real history. It's part medieval England, part ancient magic, and part soap opera.

Of course, there are some fantastical elements.

For example, mythical creatures including (but not limited to) huge and terrifying dragons.

There are creatures called White Walkers, led by the incredibly frightening Night King, who are also making a bid for control over Westeros.

The eighth season, coming out this month, will be the show's last.

And viewers can't wait to see who ends up sitting on the Iron Throne. There are still a fair few viable contenders.

Fans are pretty excited for the season to come out.

Getting a new serving of your favorite show is always a good thing, but the fact that this season is the last means it'll answer all of our most pressing questions (we sincerely hope!).

But it's not all good news.

We're already dreading the season being over and knowing there's no more Game Of Thrones coming ever again.

This week, the cast held a premiere party.

The entire cast was invited to celebrate the series' end, and it was certainly a special event.

People felt a lot of emotions.

Seeing the cast reunited after many haven't been seen together in years really made us remember the span of the show - and how amazing the journey has been. We've got all the best pics, so keep scrolling!

Some of the highlights were seeing past stars reunited.

The bigger characters were present, too.

Some characters who hadn't been seen in years were present, too!

Jason Momoa, who played Khal Drogo in the earlier seasons, has since blossomed into a huge movie star - though many remember his Game Of Thrones beginnings.

Some stars were looking truly fabulous.

Among the very best dressed were Gwendoline Christie, who plays Brienne of Tarth, and Nikolaj Coster-Waldau, who plays Jaime Lannister.

The Skins family was in full force.

This photo is a personal fave.

Oberyn Martell was back, too.

Plus, we got this adorable reunion.

Ellaria and Oberyn together again! Our hearts can hardly take it.

There were even some surprise attendees.

Jack Gleeson, who played villain Joffrey Baratheon to absolute perfection, has not been in the acting-scene since the very beginning of Game Of Thrones, but he made an appearance at the premiere!

Also, Joe Jonas was there.

Jonas is engaged to actress, Sophie Turner, which was a total "when worlds collide" moment for us.

The brain behind the whole operation - original writer of the book series Game Of Thrones is based on, George R.R. Martin.

There were many familiar faces in attendance.

One was Conleth Hill, who played beloved character Varys, one of the most original (and dastardly) of the series.

Charles Dance made an appearance.

Dance played one of the show's greatest villains, Tywin Lannister, who met one of the cruellest ends in the shows history.

And you won't be ready to see this...

Ned Stark was there! The death of this original character (played by Sean Bean) was one of the turning points in the show, and arguably the cause of everything that has happened since.

The event was undoubtedly star-studded.

Another of the show's biggest stars (and we mean this quite literally) is Thor Bjornsonn, who plays The Mountain.

Bjornsonn gave us one of the best moments of the evening.

This rematch between Oberyn and The Mountain - which, in the show, proved to be the end for the unfortunate Martell.

Luckily, this time there was a different ending.

This picture of the pair of on-screen enemies hugging it out is massively heartwarming.

But there was one photo that really got people talking...

Thor Bjornsonn was pictured alongside his girlfriend - and the picture looks pretty bizarre. The star is a whopping six foot nine, compared to his girlfriend's petite five foot two frame.

And another incredible image has surfaced.

This picture of the Icelandic strongman holding a regular-sized coffee cup looks like an optical illusion. It really does show how huge the actor is!

Overall, these pictures have got us feeling all emo.

We can't believe what an amazing journey we've been on with these characters - and we're even more in shock about the fact that it's coming to an end. Sob!
20%

$17.81 $14.25
Buy Now
See More Deals
We hope you find these deals as awesome as we do! Just an FYI: we may receive a share of sales from links on this page