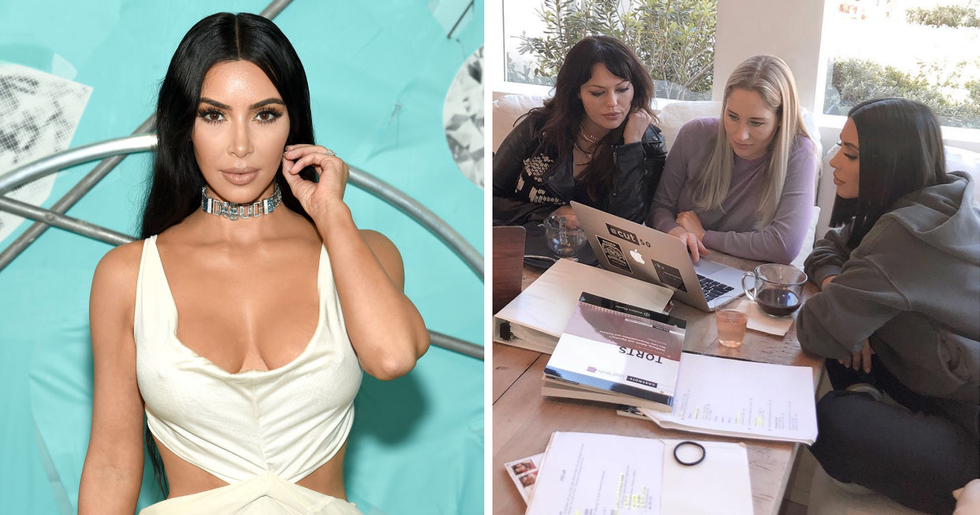 We have just about gotten used to the idea that Kim Kardashian may actually become a real-life, qualified lawyer.

It's taken us a while, but we've gotten there.

But now she's gone and done something that's left us gobsmacked all over again.

Only Kim could turn up for her first law exam and have more people talking about her appearance than how prepared she is for the test ahead.

You will never believe what she brought with her!

And we've just found out something even more shocking about Kim's future as a lawyer. Check it out at the bottom of the page.

The world went into shock when Kim Kardashian announced that she was studying to become a lawyer.

In an interview with Vogue, Kim revealed that she had been studying for the 2022 state bar exam since last summer. WTF!

It's a massive undertaking for an already-busy working mom.

She said: "I had to think long and hard about this. I just felt like the system could be so different and I wanted to fight to fix it, and if I knew more, I could do more."

But, in California, Kim will be able to take the "baby bar" exam which, if she passes, will allow her to continue studying to become a fully qualified lawyer.

Kim has shown an interest in the criminal justice system for quite a few years now.

She even visited the White House to meet with President Donald Trump to convince him to pardon Alice Marie Johnson, who was serving a life sentence for drug trafficking. And she succeeded.

She did have help, though, from political activist, Van Jones.

Jones is part of the national bipartisan advocacy group, #cut50, which Kim had been working with, making visits to prisons, petitioning governors and, eventually, going to meetings at the White House. She's definitely come a long way since she first hit our TV screens.

And Jones has nothing but praise for his protege.

He said: "I was in the Oval Office with Kim and Ivanka and Jared and the President. And I watched Kim Kardashian unleash the most effective, emotionally intelligent intervention that I've ever seen in American politics."

She has also been vocal in her support for putting an end to California's death penalty.

Kim met with Governor Gavin Newsom earlier this year to discuss her stance on the matter. She said at the time, "For the last year I have immersed myself in learning about the criminal justice system. Racial bias and unfairness run deep throughout the justice system but especially when it comes to the death penalty."

And, of course, we all know that law is in her blood.

Kim's late father was part of the defense team for the O.J Simpson trial, and Kim has spoken about how she would often snoop through his evidence books at the weekend. So maybe she was always destined for greater things?

She's definitely been putting in the work.

After a public backlash about her commitment to her studies and her reliance on money to succeed, Kim hit back at her critics saying that she is currently studying eighteen hours a week. That's some commitment considering all her other projects that she also has going on.

She even admitted to forgoing time with her kids in favor of her studies.

She said: "I want people to understand that there is nothing that should limit the pursuit of your dreams and the accomplishment of new goals. You can create your own lanes, just as I am." But has it all been worth it? Find out if she passed her first exam below...

Fighting talk, but Kim has admitted she often feels intimidated by the task ahead of her.

She said: "There are times I feel overwhelmed and I feel like I can't do it but I get the pep talks I need from the people around me supporting me."

Two of these people are Jessica Jackson and Erin Haney.

These two lawyers are currently mentoring Kim and ensuring she has the support and advice she needs to fulfil her dream of becoming a lawyer.

And it seems that she is finally one step closer to this dream.

Kim was seen entering a building in L.A on Wednesday to take her first law exam.

And Kim being Kim, of course, she looked fabulous.

Although she was clearly dressed for comfort in a pair of grey tracksuit bottoms and flats, her trademark long locks looked as glossy as ever.

And no-one could fail to miss the Hermes Birkin bag that she was carrying.

In her left hand, Kim carried a stunning cream crocodile Hermes Birkin bag. We certainly didn't have any accessories worth over $100,000 when we were students...

In the same hand that was carrying her designer bag, she also held a thick binder that looked full to the brim with notes. She also carried a green khaki bag on her back which seemed full of something bulky. Books maybe? Or her make-up for the day? Could be either.

And it's not the first time that we've seen Kim's beloved binder.

Ahead of the exam, Kim shared a photo of the binder alongside a series of flashcards detailing well-known legal definitions and terms such as "negligence" and "breach of duty." We actually think she has lovely handwriting!

Kim's first exam was on torts.

kim k really out here posting about her torts test tomorrow? the simulation is glitching but like in a cute way https://t.co/UityeuU1qy
— taylor (@taylor)1555443058.0

Which is one of three subjects that she has been studying, as well as criminal law and contracts. On her least favorite subject, which happens to be torts, Kim has said: "To me, torts is the most confusing. The reading is what really gets me. It's so time-consuming."

But, clearly, she did not need to worry.

Following the exam, Kim tweeted: "Aced my test btw." Maybe all her doubters need to take note. Kim is on a mission to become a lawyer and we're starting to feel like she's going to succeed!

She's even been given a cute, new nickname.

Fans are now referring to her as 'Legally Brunette.'

Cleary, this is a reference to the much-loved film, Legally Blonde, starring Reese Witherspoon.

Reese starred as Elle Woods, a stereotypical "dumb blonde" who worked her ass off to get into Harvard and graduate as a lawyer.

They are actually quite similar.

Both are feisty, fabulous women who were not taken seriously in the past due to their looks. And it seems that Kim, like Elle, will do anything to succeed.

Although some people are still sceptical.

"Does she just think she aced her exam?" "Surely she can't have already gotten the results?" "Maybe she is celebrating too soon..."

Others are behind her all the way.

If Kim motivates just one woman to strive for success and fulfil her dreams, then she has achieved something really special. Hopefully, her passion will motivate many.

A few are still indignant about her fast-tracked new career.

And we can understand their frustration. Especially given the most recent news we have just found out about her future as a lawyer...

Attorney, Robert Shapiro, has already reached out to Kim.

Kim has been offered a job at the well-known attorney, Robert Shapiro's, law firm, pending her passing her exams of course.

But could this just be a case of a friend helping out a friend?

Robert Shapiro's firm worked previously with Kim's father on the O.J Simpson case, so he has known Kim for quite some time. On employing her as a lawyer he said: "Kim's already done incredible work with no experience, so the sky's the limit now that she's seriously practising law." We are literally speechless.

Clearly, the sky is the limit for this reality TV star.

Anything that she puts her mind (or her money) to, she can do.

At this rate, she may even be running the country one day.

Now that is a scary thought. Especially seeing as her right-hand man would most likely be Kayne West. We dread to think of what might happen with those two in charge!