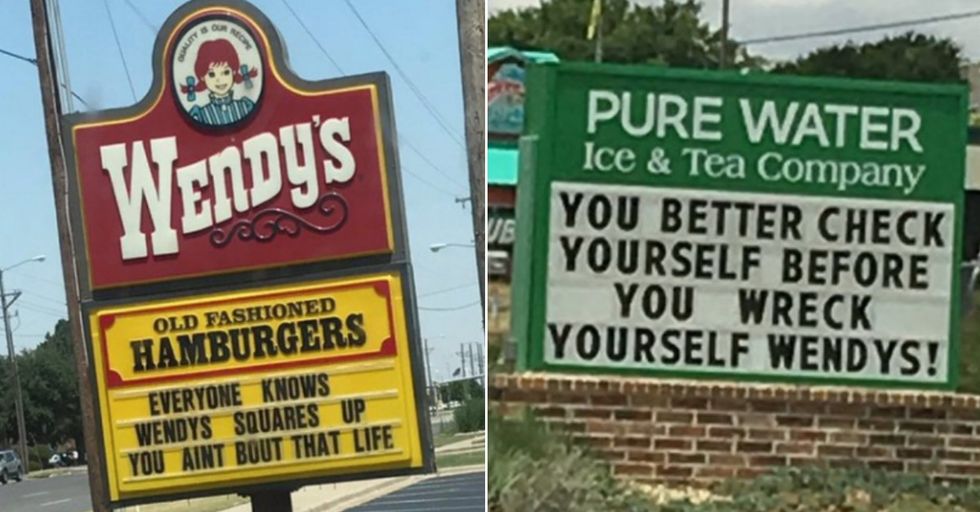 It turns out the beef at Wendy's isn't limited to just the burgers.

For the past few weeks, Pure Water Ice and Tea Company and Wendy’s, right across the street from each other in Lubbock, Texas, have engaged in a humorous back-and-forth via the stores’ sign boards.

We already know Wendy's can dish it out on Twitter, but how do they do with their signs?

"Everyone knows Wendy's squares up. You ain't about that life!"

Pure Water fired back, not one to back down from a challenge.

"Anything you can brew, we can brew better. Try our FruitTea Chillers."

Dang...Wendy's isn't just firing back with food. They're trying to encroach on the Pure Water beverage game, too.

That must have hit them where it hurts, so much so they issued that warning. Things are heating up...

"Something else is familiar. Our fresh never frozen beef."

This one is a little disappointing to be honest. I mean, we know by now you never use frozen beef. Will they up their game?

"Burgers aren't the only thing square at Wendy's."

"Wendy's parking only. Violators will be served Pure Water."

And...Wendy's is back with a burn!

"Good thing our tea is stronger than your sign game!"

And with that epic clapback, we come to the end of the war...for now. Who do you think came out on top?