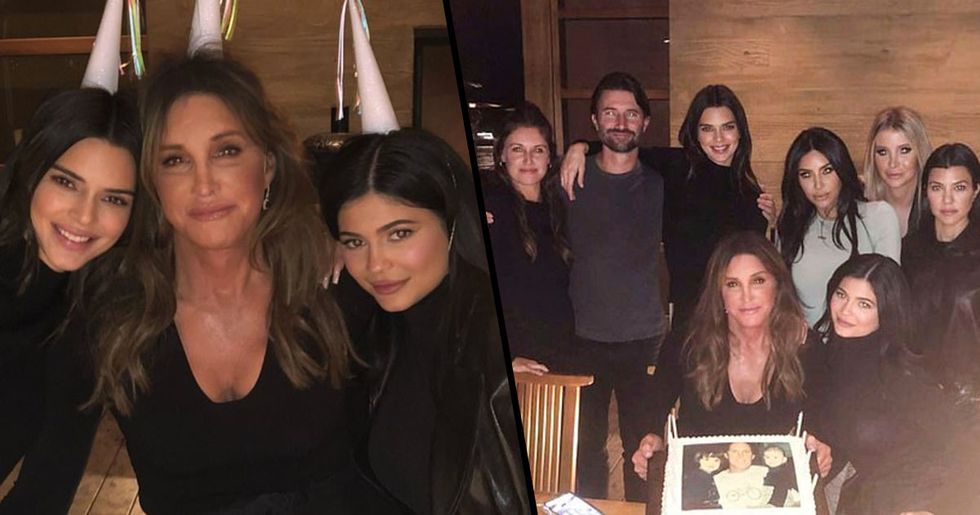 Bruce had been silently battling with his gender identity for years and was visibly delighted when he officially came out as Caitlyn in 2017. Since then, Caitlyn has become a global ambassador for trans people and has been living her best life as an open and proud trans woman.

And now, almost three years on, the star is celebrating her birthday with her family, though there were some surprising no-shows at the gathering. That's not the only weird thing about the whole ordeal. The whole of the internet can't stop talking about Caitlyn's cake... Cue the awkwardness!

However, it's been a few years since the transition now...

Even though they have been through some pretty rough patches, the family seems to have worked things out. Well, most of them.

And just in time for Caitlyn's birthday!

On Tuesday, she celebrated her birthday surrounded by members of the Kardashian-Jenner clan and I must say, it looked so cute and homely. I mean, we're used to seeing them in glamorous photoshoots and throwing each other glitzy parties. Rarely do we see them engage in activities such as this.

The trans activist was joined by almost everyone...

We saw was her daughters Kylie and Kendall Jenner, son Brandon Jenner and stepdaughters Kourtney and Kim Kardashian.

Rumors have been circling about the relationship between Caitlyn and his step-daughter Khloe. Apparently, there have been tensions rising between them for a while.

She did claim she had a "photo shoot" to be at. Well, it must have been pretty damn important if it meant missing a family members birthday gathering for.

We can't just point fingers at Khloe though...

Because Caitlyn's other son, Brody Jenner, was also a no-show... Yikes. I mean, Brandon turned up, so it would make sense for Brody to be there too, but he was nowhere to be seen.

And obviously, Kris wasn't going to be there.

But to be honest, I don't blame her for not turning up. After the unflattering lines about her in Caitlyn's memoir, their relationship completely broke down, which in turn, affected the relationship between her and all of her children, most notably Khloe.

And it gets a little more awkward as a US Weekly source revealed this...

According to reports, the hostility between the two is a mutual feeling as Caitlyn apparently pulled out of an event in the attempt to avoid an awkward encounter with Khloe. Yikes.

But that wasn't the only awkward part of the birthday bash.

There's one more thing that the internet can't stop talking about, and this seems to be a crucial part of any birthday party...

When you zoom into the cake, you can see that the image on it is of Bruce Jenner with his two youngest daughters as opposed to her new self, Caitlyn.

While some are saying it's just a picture, others are very confused.

Do you agree with this response that claims it's "shady?"

Others found the entire thing hilarious.

This user said that after they had seen the cake, they couldn't stop laughing.

Even Perez Hilton threw his opinion into the mix!

He referred to it as "odd," which many people seem to agree with.

However, even despite this, it seems Caitlyn didn't care.

Through the multiple Instagram story posts, you could see the rest of the family having fun, singing happy birthday and just enjoying being with each other. Caitlyn looked particularly happy, even as she was blowing out the candles.

And fans couldn't help but pick up on another detail: How amazing Caitlyn looked.

The fact that it was her 70th birthday and her skin was glowing, her hair had a nice shine to it and her wrinkles were basically non-existent, made the whole of the internet gush over her.

Even if that means undergoing at least one botox treatment... If you're in the mood to read more about the Kardashian skipping out on an important family event, then keep scrolling to re-live the moment that Kris decided she had more important things to do than attend Kim's birthday bash... I bet that didn't go down too well.