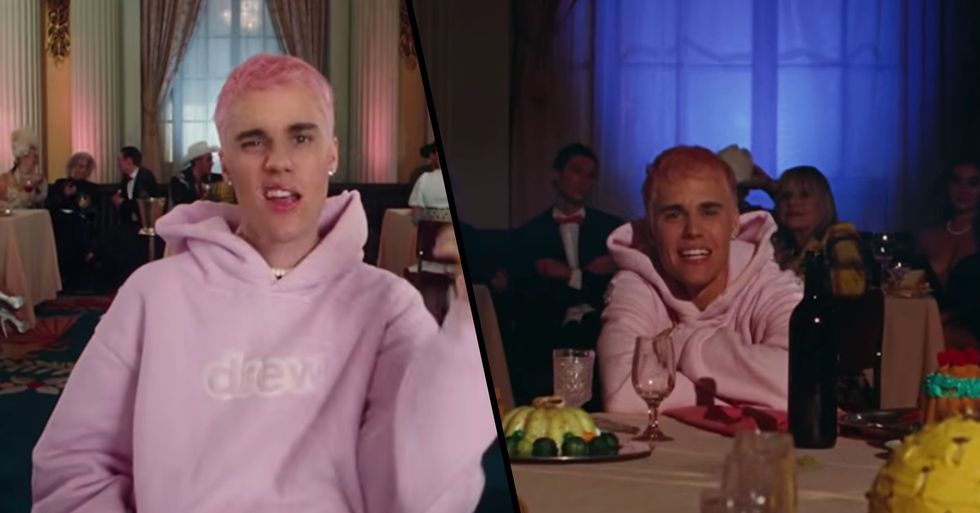 Justin Bieber dropped his latest single, "Yummy" last week, and everyone is talking about one thing. Nope, not his music. Not his dance routine. Not even his pink hair. But his chin.

In the music video for the track, something seriously weird happens to his chin, and the internet has had the best reaction.

Yep, Beliebers all over the world are able to scream, shriek, and pull their own hair out over Biebs once more.

Justin kicked off 2020 by dropping a brand new single.

"Yummy" was released on January 4th, and people are a little... Divided.

While some are dubbing Justin's latest single as a "complete banger"...

Others aren't too convinced and are slamming the track as "tone-deaf" with "tedious and repetitive lyrics."

I mean, I'm not sure whether I can even call them lyrics...

It isn't his finest piece of work...

And I haven't even got started on the music video.

It is set in a rather chaotic looking restaurant...

While Justin sits at a large table with copious amounts of food while simultaneously dancing around flamboyantly.

It's all very strange...

But there's one thing, in particular, that's getting people talking...

And it's Justin's chin.

In the music video, Biebs' chin apparently does something a little strange, and it's seriously freaking people out.

Well, here it is.

As he's singing, his chin suddenly seems to... Grow?

It's all very bizarre.

His chin suddenly elongates, as though his face is made out of play-doh and someone has overstretched it.

I have no words.

People are not loving his chin...

I have nothing against Justin Bieber but that one shot of his chin decreased my life expectancy by 17 years https://t.co/ghwXArmYPO
— becca (@becca)1578172715.0

And one poor Belieber believes that the horror of his deformed face has lowered her life expectancy by seventeen years... I feel that.

Please reattach your chin to your face, thanks.

And some have been making some rather hilarious comparisons...

These are too good.

Okay, this one is scarily accurate...

I will never look at Biebs the same again...

And others are more concerned about other aspects of his face...

What's going on with those brows, Biebs?

But there could be an explanation for it all...

The music video was directed by Bardia Zeinali, who has been known to use strange face filtering in their previous work.

The face warping thing seems to be quite the trend these days...

So, just to clarify, folks... There is nothing wrong with Justin's chin. Panic over! For more on Justin's questionable fashion choices, keep scrolling to read about his new face tattoo...