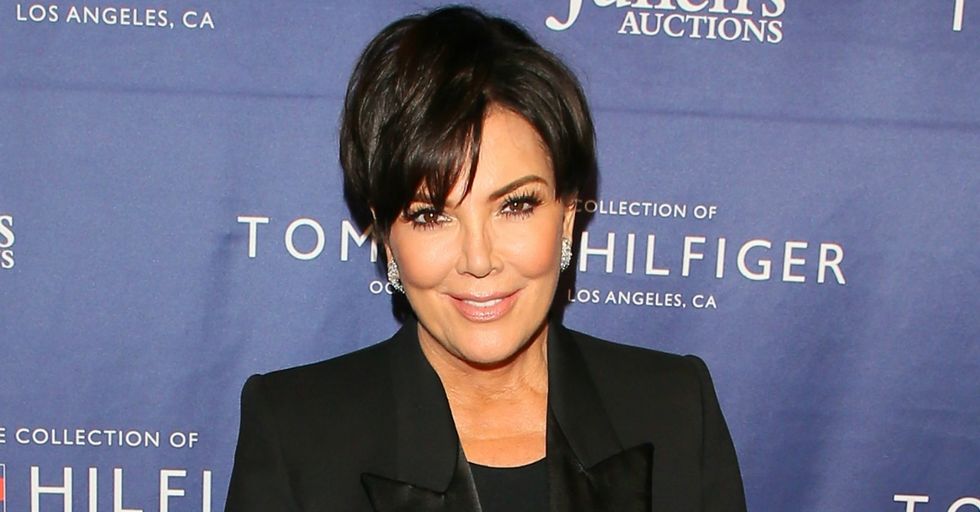 Kris Jenner is the manager, er, mom-a-ger of the Kardashian-Jenners. She's been coaching Kylie, Khloe, Kim, and Kourtney throughout their individual careers and life changes. She may not have as many photoshoots as the other Kardashian family members, but she cannot be upstaged in terms of sass and being extra. She is the queen of doing the most, whether she is taking photos and cheering her daughters on, or simply wearing sunglasses inside and looking saucy.

The latest wearing-sunglasses-inside picture threw the Internet for a loop. Why? First because she dyed her hair platinum blonde. Second, because she is just next-level extra. And third, because she basically accidentally became Cruella de Vil.

Kris is posing casually on a couch, wearing rose print head to toe (including that coat/cape she's wearing), holding a mysterious clear alcoholic beverage, covered in a lush fur shawl, wearing sunglasses inside (classic) and most notably, platinum blonde. It's not clear whether Kris actually dyed her hair or whether she's wearing a wig, but we think it's a good look for her either way. Kim captioned the photo, "Caption this..." and oh did people respond.

People were quick to spot the resemblance to a certain Disney villain...

Cruella de Vil might actually be #goals or at least a fashion inspiration if she didn't, we don't know, plan to kill all of those helpless puppies in a heartless attempt to make more fur coats? But look at those red gloves, huge fur coat lined in red satin, fierce eyebrows, and matching mint accessories. That's extra. Damn, Cruella. Why'd you have to be evil? Cruella once said, "We lose more women to marriage than war, famine, and disease." I mean, come on!

Kris pretty much walked into this one.

The resemblance is uncanny. Hades Brown replied to Kim's tweet with a callback to the barber meme which originated in 2006 from a joke by Zach Galifinakis.

Twitter user @sallyanngamble took the look even farther and photoshopped some dalmatian print onto Kris' outfit.

All she needs to do now is replace Kris' martini with a cigarette in a mint-colored old-fashioned cigarette holder. Even Kris' red accessories are on point.

Someone created this gif...

...and more people responded with different interpretations of the Kris Cruella meme. You'll want to see the relatable captions they added.

They captioned Kim's picture with, "Can I speak to the manager"... "Oh wait, I AM the manager." Kris is always the manager and the momager.

A whole different thread of memes about ballin' on a budget emerged.

We all want to be extra, but we have much smaller budgets than Kris J. That doesn't mean that she can't embody our *mood* though, when we find out we have a few more cents in our bank account than we thought we did!

We are fancy when we add extra condiments or (*gasp*) vegetables to our instant ramen noodles. This is a big step. If it were a person, it would have a martini and some pursed lips.

Thanks, Kris, for enabling us to be extra.

...Even if we don't have the means to be quite as extra as you. If anyone is looking for a last-minute Halloween costume, this could be your chance to embody Kris' attitude for just a day.

In her own words: