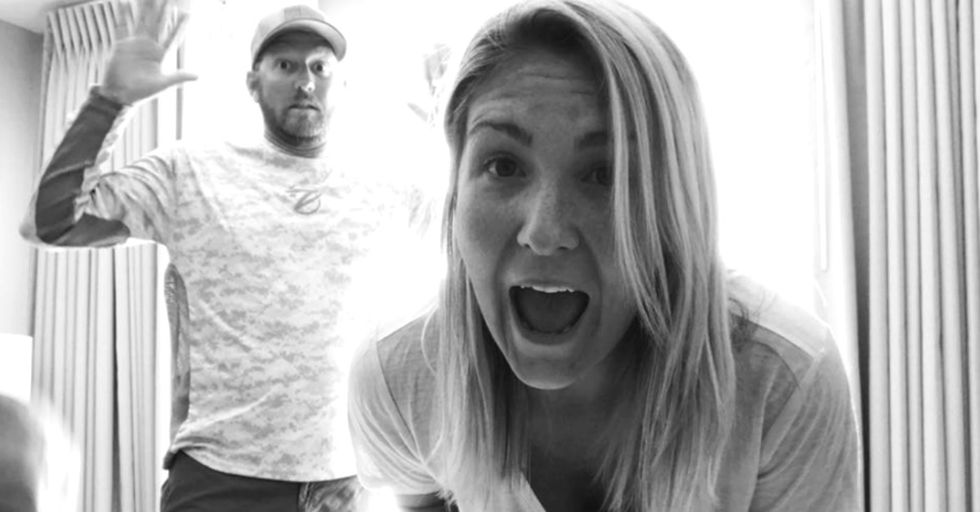 These are things any married person can probably empathize with. Life with another person can't possibly be perfect 100% of the time, and this blogger aims to show the world how reality can be better than the perfect fairytale.

But when you hear the surprising secret behind her happy, long-lasting marriage, you won't believe how simple it is.

If you're married, you certainly know that marriage is complicated.

Partnering up with one person for your whole life? It's a huge decision, and a major commitment.

Thankfully, there are many married folks out there who've been at the game for quite some time and have some solid advice.

A select few of those people are also brave enough to share their experiences with the masses online. Reading through lessons other people have learned over the years can shed priceless insight on how we can cope with our own struggles.

Grief to Hope Blogger, Nikki Pennington, and her husband Jerred have been married for 11 years.

They also dated thirteen years prior to getting married. In this day and age, that's a pretty amazing feat!

Over the course of their long relationship, Nikki's been asked for a lot of advice on how she stays happy in her marriage.

One question people have ask over and over again is so, what's the secret to a successful marriage? So, she recently took to Facebook to reveal her big, long-lasting marriage secret.

Her secret? It's definitely not what you'd expect.

And it's since she posted it, it's gone totally viral...

"Jer and I have been together since we were teenagers," Nikki wrote.

"After thirteen years of being together and eleven years of marriage I've had people ask me, 'So, what's the secret to a successful marriage?'" "I usually laugh."

"I know the typical responses from the 'Don't go to bed angry' or the 'Always say I love you when they leave.'"

"His way of saying 'I love you' some mornings is letting me sleep in when he leaves and everyone is still asleep."

"All the 'secrets' we've broken them." Then, she revealed her biggest secret of all...

"The secret to a long lasting marriage," she wrote...

"is there is no secret at all." Hold the phone. What? "It's to get up and try again over and over every damn day."

"It's hanging on tight when you are young, newly married and living on frozen dinners because it's all you can afford."

"It's staying up all night in tears with your first newborn child because you both are over tired, overwhelmed and scared to death but you are in it together." "It's counting pennies when you are young so that you can build a life together for your future family. It's about knowing that nothing is going to turn out perfect, that your marriage won't be a highlight reel because that's not real life." We love this dose of sweet reality! So what else did Pennington have to say?

"It's about being deep in the trenches of so many obstacles that life could throw you and getting to look over and know that you aren't alone and that your best friend is walking it with you."

"It's about knowing that you can never be prepared for the burdens you might have to help your partner carry but you do know you are willing to be there when they need rest from the burden."

Pennington had some very powerful advice for couples out there still searching for that one successful marriage secret.

"Just try every single day, in the trenches and on top of the mountains don't ever stop." "Because stopping, that's one thing that isn't a secret, it will make you fail."

Pennington's post has since gone viral. Over 100K people have shared her words of wisdom with their friends and families.

“I think it’s resonating with so many people because it’s honest," she told UsWeekly. "So many of us don’t want to talk about the bad times in our marriage because then we are failing. But in reality, we all go through difficult times. I’ve also received lots of messages from young couples with people around them doubting if they can have a successful marriage. My post gave them hope that they can make it." While sustaining a marriage may not always feel like a walk in the park, having access to powerful advice like this certainly helps! Do you have secrets to a long-lasting, happy marriage? We'd love to hear them over on Facebook!