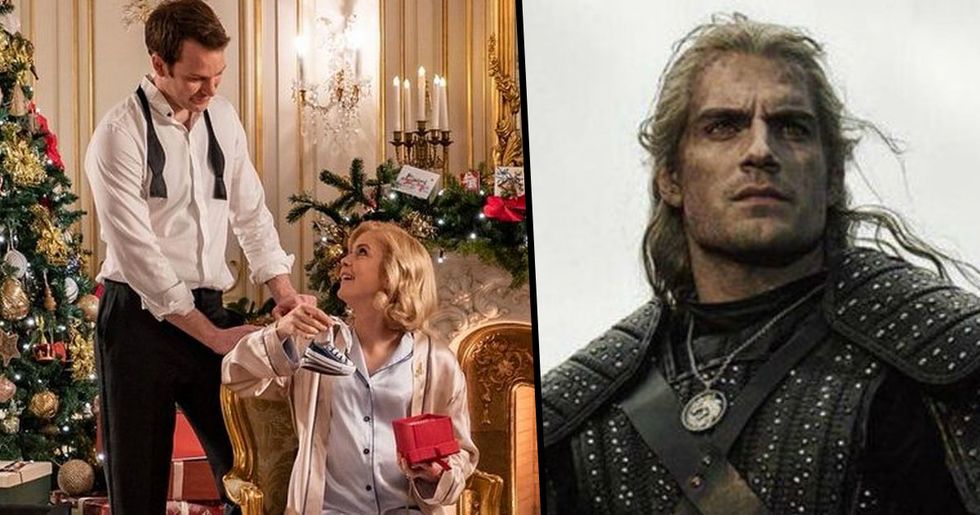 Everything Coming to Netflix in December

Christmas is just around the corner but there's still a whole slate of Netflix content to binge before the year comes to a close. There's a whole bunch of new content set to hit the streaming platform throughout December. Of course, the streaming giant will be giving us a tantalizing line-up of holiday movies to watch to our heart's content throughout the festive season, but the service will also be bringing a whole host of highly-anticipated original titles.

From festive favorites to new releases and long-awaited returns, there's truly something for everyone - December is shaping up to be an unbeatable month for binge-watching. Keep scrolling to check out everything coming to Netflix throughout December.

Kicking off the line-up is the upcoming thriller, Dead Kids. The movie premiered on the closing ceremony of the 2019 Cinema One Originals Film Festival and is set to star Sue Ramirez, Khalil Ramos, and Markus Paterson.

Netflix is once again treating us to a guilty pleasure festive offering. A Cinderella Story: Christmas Wish, starring Laura Marano, Gregg Sulkin, Isabella Gomez, chronicles the story of Kat Emerson who is forced into taking up a demoralizing job as a singing elf at billionaire Terrence Wintergarden's Santa Land. But when she meets Nick and gets invited to the prestigious Wintergarden Christmas Gala, her family do anything they can to sabotage it. So, it's basically Cinderella but Christmassy, what more could you ask for?

The Adventures of Sharkboy and Lavagirl

This movie is giving us all the nostalgia feels. The kids classic tells the story of a young boy who is recruited by his imaginary friends, Sharkboy and Lavagirl, to help save their planet.

The well-loved series is back for a second stint where we'll get to see even more mind-boggling magic tricks from Justin Willman.

Greenleaf has well cemented itself as a fan favorite, meaning many will be pleased to know that the long-awaited fourth season will be hitting Netflix in December. Greenleaf centers on the twisted world of the Greenleaf family and their Memphis megachurch.

A Christmas Prince: The Royal Baby

The follow up to the smash hit A Christmas Prince tells the story of a pair of expectant royals and their run-up to Christmas day – plus their baby’s birth.

The festive comedy depicts the life of Johanne, who is well and truly sick of the single life, so, starts a twenty-four-day hunt for a partner to bring home for Christmas.

Ian Somerhalder stars as Dr. Luther Swann, who enters a world of true horror when a virus is released in ice that's melting due to climate change - seems very timely, don't you think?

The Confession Killer centers on the renowned serial killer, Henry Lee Lucas, who famously confessed to over six-hundred killings in spine-chilling detail. But his case takes a bizarre turn as viewers get a closer look at his so-called "confessions."

The Full House reboot is back on our screens once more, for what is likely to be its last (ever) season, so fans will be watching the Tanner family's antics for one final time this month. *cries*

Hosted by Stace Dooley, Glow Up aims to seek out Britain's next best makeup star by giving the lineup of eager makeup artists a series of challenges judged by a whole host of industry professionals...all to win a career-making prize.

Of course, there's yet another festive spectacle to feast our eyes on in December. Across the 3 episodes, Three Days of Christmas follows 4 sisters as they celebrate the holidays in their family home at 3 different times in their lives; adolescence, adulthood, and elderly age. We get the feeling this one may be a tear-jerker.

From Paris with Love

An unlikely pair of young employees from the office of the U.S. Ambassador in Paris, along with an American spy, come together in order to stop a terrorist attack in the city.

It Comes at Night

Halloween may be well and truly over but that isn't stopping Netflix from adding the odd horror movie to its catalog. It Comes at Night chronicles 2 families trying to survive in the midst of a mysterious apocalypse, that leaves the world with few survivors. The 2 families are forced to share a home in an uneasy alliance to keep the outside evil at bay - but it seems that the true horror may already be inside.

This festive comedy tells the story of M'Dear and her sisters as they struggle to keep their singing act together before a church Christmas pageant.

Netflix is finally dropping the third season of the popular series, which follows an English combat nurse from 1945 who is mysteriously pulled back in time to 1743.

The Sky Is Pink

Starring Zaira Wasim, Priyanka Chopra, and Farhan Akhtar, The Sky Is Pink tells the love story of a couple spanning twenty-five years, told through the eyes of their teenage daughter Aisha Chaudhary, who was diagnosed with Pulmonary fibrosis.

Jack Whitehall: Christmas with my Father

Jack Whitehall and his father, Michael, will be filming a festive take on their smash show, which has just aired its third season.

The Chosen One Season 2

The thriller series tells the story of 3 doctors, who, in their pursuit to bring a Zika vaccine to the remote Pantanal, end up being pulled deeper into the mysteries of a faith healer's cult.

We all know that when it comes to the true crime genre, Netflix is well ahead of the game, and it looks like this doc is no exception. The three-part documentary, Don’t F**k With Cats: Hunting an Internet Killer, will tell the harrowing real-life case of a man who went viral for killing kittens and was later convicted of murdering a Chinese student in 2012.

Starring singing legends, Cher, and Christina Aguilera, Burlesque tells the tale of a small-town girl who ventures to Los Angeles and stumbles upon a neo-burlesque club run by a former dancer.

The Danish Girl is a reimagining of the love story inspired by the lives of Danish artists Lili Elbe and Gerda Wegener. Set in 1926, the movie follows how Lili and Gerda's marriage and work evolve as they navigate Lili's groundbreaking journey as a transgender pioneer.

Comedian, Michelle Wolf, is returning to the streaming giant once more - this time, instead of hosting a late-night show, she'll be starring in a brand-new stand-up special.

The Secret Life of Pets 2

The sequel of the beloved animated movie continues the story of Max and the gang, following their double lives after their owners leave them for work or school each day.

After crash-landing on an alien planet, the Robinson family fight against the odds to survive and escape its clutches, but, of course, there are hidden dangers around every corner.

Starring Jason Bateman, the thriller chronicles the harrowing spiraling of a young married couple's lives after an acquaintance from the past brings a mysterious gift to their house.

Kevin Hart: Don’t F**k This Up

From new movies and specials to backlash and car crashes, it's safe to say Kevin Hart has had quite an eventful 2019 - and he's about to unpack all these events in this new six-part documentary.

The action-comedy tells the tale of 2 corrupt cops who set out to blackmail and frame every criminal unfortunate enough to cross their path.
But, everything doesn't run quite as smoothly when someone who appears to be even more dangerous than them enters the picture.

Inspired by the book The Skeleton Crew by Deborah Halber, the series centers on the life of a thirty-year-old woman who is forced to leave her husband and London, and return to her hometown of Lódz. But, while driving, she witnesses a situation that looks like suicide, but the circumstances seem highly suspicious.

The fantasy series follows a group of students, who, after being recruited to a secret academy, discover that the magic they read about as children is very real - and is more dangerous than they ever could have imagined.

Based on the book of the same name, fantasy drama, The Witcher, follows a mutated monster hunter, Geralt, who struggles to find his place in a world.

It's the one we've all been waiting for... You season 2 is finally hitting our screens on December 26. The first season had us glued to our screens as we watched the creepiest bookshop employee ever seduce his writing-student obsession while leaving a pile of corpses in his wake. That's our Boxing Day sorted!

Set in Depression-era Franklin County, Virginia, the movie centers on a trio of bootlegging brothers who are threatened by a new special deputy.

In this series of half-hour specials, 6 up-and-coming stand-up comedians, including the likes of  Big Jay Oakerson, Joey Diaz, Liza Treyger, and Yamaneika Saunders explore all things (you guessed it) comedy.

The movie tells the story of the infamous James Bond as he is sent to investigate the connection between a North Korean terrorist and a diamond mogul, who is funding the development of an international space weapon.

The beloved best friends Alexa and Katie are back on our screens for a third installment. The series tells the story of the friends as they embark on their freshman year of high school, all while Alexa is undergoing cancer treatment.

Based on the comics by Santiago García and Pepo Pérez, the comedy series centers on Javier, a twenty-something, who is struggling with adulthood and his love-life, as he unexpectedly becomes a superhero.

The World Is Not Enough

It seems Netflix is really hammering out the James Bond content this month. The World Is Not Enough is yet another one of the streaming giant's offerings from the iconic franchise. The movie follows James Bond as he uncovers a nuclear plot while protecting an oil heiress from her former kidnapper.

Sci-fi thriller, Sweetheart, tells the mysterious tale of Jenn, who has washed ashore a small tropical island. She must spend her days not only battling to survive but after realizing she's far from alone, she must also fend off the evil force that comes out each night.

Directed by Fernando Meirelles and written by Anthony McCarten, biographical drama, The Two Popes, tells the story of Pope Benedict and the future Pope Francis, as they try to find common ground to create a new path for the Catholic Church. Interested in what tantalizing content is already available to watch on Netflix? Keep scrolling to learn more about the platform's new documentary The Devil Next Door, which has been hailed as the "most gripping documentary in years."