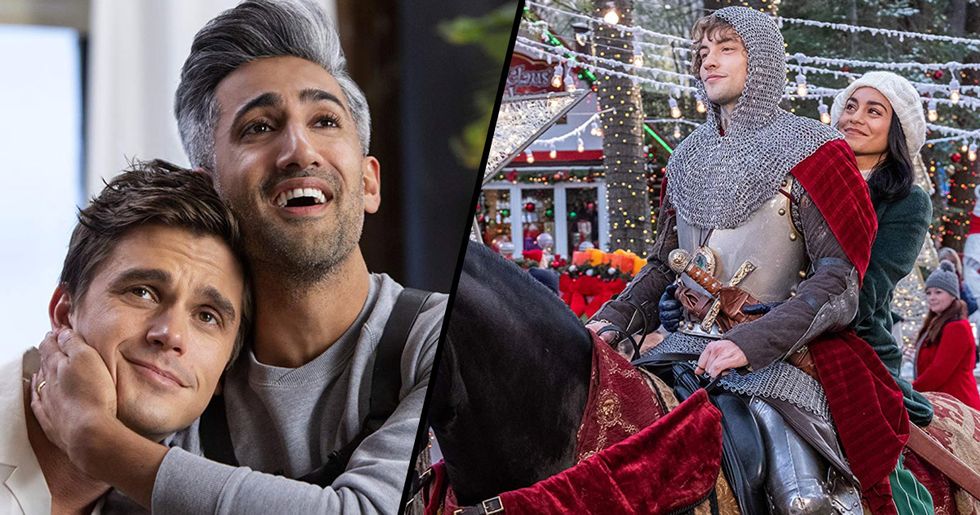 Everything Coming to Netflix in November 2019

As the nights draw in, the weather gets colder, and we all start thinking about the holidays - there seems to be no better time than spending the evenings cozying up on the couch and watching some good old TV.

As usual, Netflix is releasing a slew of fresh new content for us to get our teeth into throughout November. From returning fan-favorites like The Crown and Queer Eye, and big-screen hits to intriguing documentaries and of course, copious amounts of festive content, November is shaping up to be a pretty spectacular month for binge-watching folk.

Netflix's hit coming-of-age drama, which follows a teen named Sam, who’s on the autistic spectrum, is back for a highly-anticipated third season. After that almighty season 2 cliffhanger, the third installment will no doubt see Casey continue to wrestle with her confused romantic feelings for her new school friend, Izzie.

The movie centers on 2 polar-opposite, distant brothers who are presented with the opportunity to get to know each other better following a difficult situation in their lives.

Hache is based on the true story of Helena, a woman pulled into the heroin trafficking business in 1960s Barcelona.

As you'd imagine, Netflix is treating viewers to a slate of festive content to get us into the Christmas spirit early. The first of many is Santa Girl, which tells the story of Santa's daughter, who is given the chance to go to college for a single semester in the "real" world before having to return to the North Pole to her father.

The Man Without Gravity

Directed and written by Marco Bonfanti, the Italian comedy-drama-fantasy movie centers on a gravity-defying boy named Oscar, who is kept hidden from the eyes of the world by 2 women. That is, until Oscar decides that the world must know who he is.

Wild District follows a lethal guerrilla fighter, who escapes the jungle after the signing of the Colombian Peace Agreements and must try and re-integrate into society, all while escaping his past.

The End of the F***ing World Season 2

When The End of the F***ing World first hit screens in 2017, the world was gripped as we watched the quirky comedy-drama unfold. The show centers on seventeen-year-old James who is pretty sure he's a psychopath, and Alyssa the elusive, cool new girl at school. The pair form an unlikely bond as they go about their wacky road trip in search of Alyssa's real father. Thankfully, season 2 will be hitting the streaming service very soon...

She-Ra and the Princesses of Power Season 4

The reboot of the 1980s series chronicles an orphan girl who is transformed into a warrior by a magic sword.

A festive version of the hit baking show will be coming to the streaming platform in November. So, we're set to see a line-up of contestants ready to show off their baking skills... Christmas style.

The Indian series is returning for a third installment. The show centers on a couple in their twenties living in contemporary Mumbai, as they navigate the ups and downs of work and modern-day relationships.

Starring Alicia Vikander, Riley Keough, and Kiki Sukezane, Earthquake Bird tells the story of a young female expat who is suspected of murder after her friend goes missing in the midst of a love triangle with a local photographer.

This animated movie has a surprisingly star-studded cast, including Parks and Recreation’s Rashida Jones, and chronicles the postal service's worst worker Jesper, (voiced by Jason Schwartzman) as he is banished to work in the arctic circle. But, while there, he meets some truly fantastic characters, including local teacher, Alva, and mysterious carpenter, Klaus, who are among the sidekicks who join Jesper in his festive adventures.

This is the one we've probably all been waiting for... The Crown has proven to be one of Netflix's most successful shows. For those who have been living under a rock and haven't got round to watching, the show chronicles the life of Queen Elizabeth II from the 1940s to modern times. The new season will be seeing the acting legend, Oliva Coleman, taking the reigns as the queen and we can barely contain our excitement.

The Knight Before Christmas

The movie stars, no other than High School Musical alum, Vanessa Hudges. Her role? To help a time-traveling knight adjust to life in 2019 Ohio. But, like, at Christmas time.

Home bakers who have a poor track record in the kitchen complete to win cash on the popular series. But this time, each episode will be holiday-themed to get us in the festive mood.

The lengthy, acclaimed crime drama (it comes in at a whopping 3 hours 30 mins) set in the '50s, follows a truck driver named Frank Sheeran who gets involved with Russell Bufalino and his Pennsylvania crime family. As he rises in the ranks to become a top hitman, he takes on more dangerous tasks.

Netflix seems to be going all out on its holiday-themed baking shows. Sugar Rush Christmas is everything it says on the tin - the usual sweet treat competition but with a festive twist. What more could you want?

The Fab Five are taking their makeover expertise oversees to no other than Japan. The Emmy-award winning show will no doubt bring us more tear-jerking moments, heartwarming stories, and of course, fabulous makeovers.

How to Be a Latin Lover

Starring Kristen Bell, Eugenio Derbez, and Salma Hayek, the movie centers on Maximo, who gets a nasty shock when his wealthy, eighty-year-old wife dumps him for a younger car salesman.

The Deep revolves around the adventures of the Nekton family, a family of underwater explorers who live aboard a state-of-the-art submarine, The Aronnax.

Spitfire: The Plane that Saved the World

This documentary explores the history of the Spitfire airplane and the fighter pilots who helped win World War II's Battle of Britain.

We Are the Wave Season 1

A group of high school students turn vigilante in this coming-of-age German series.

Netflix is treating us to a big-screen classic as part of the slate of new content. The 2002 action-adventure movie stars legend, Jackie Chan, and Jennifer Love Hewitt.

Jeff Garlin: Our Man in Chicago

Comedian Jeff Garlin celebrates his thirty-seventh year of stand-up and "shares his learnings on love, loss, success, and food addiction."

The Stranded is the streaming giant's first-ever Thai original series and tells a story of an eighteen-year-old boy named Kraam, who survives a devastating tsunami along with thirty-six of his fellow students at an elite private high school on a remote island. As mysterious events start happening on the island, it quickly becomes clear that no one is coming to rescue them and Kraam must lead the students to rescue themselves.

The Toys That Made Us Season 3

The popular series delves into the ins and outs of the some of America's most iconic toy franchises.

In this festive version of the beloved animated kids' show,  Super Monsters join forces to help find Santa’s missing reindeer and save Christmas.

Although details are scarce about this exciting new show, Dolly Parton's Heartstrings features 8 episodes celebrating Parton's legendary music catalog... and she's set to come face to face with Joelene in one episode.

Those who can't get enough of all things space-related will love this series, spearheaded by National Geographic. The docudrama depicts the journey of a spacecraft crew as it embarks, in 2033, on a mission to colonize Mars.

Once again, there's another Christmas-themed spectacle coming our way. The 2018 comedy follows a group of siblings as they come together to spend Christmas with their families in their recently deceased parents' country house. But it isn't long before past sibling rivalry reaks havoc during the festivities.

The forthcoming Indian heist film centers on the manhunt for an infamous 'King' for a robbery of a hefty amount of gold.

Survivors of the 2018 Camp Fire, dubbed as the deadliest wildfire in California, recall the catastrophic events which razed the town of Paradise.

Holiday in the Wild

Sex & The City’s Kristin Davies plays a recent divorcee alongside Rob Lowe from Parks & Recreation as an elephant sanctuary owner. Kristin Davies' character travels to Africa to "find herself," but while there, she finds Rob instead – and sparks fly between the two.

After quite a buzz, the historical drama starring Robert Pattinson and Timothée Chalamet is finally hitting screens. Based on several plays from William Shakespeare's "Henriad", The King tells the story of Hal, a wayward prince, as he ascends the English throne following his father's death.

This futuristic spectacle centers on a cop and a troubled young woman who investigate a strange wave of youth suicides in a world where regeneration technology lets humans live indefinitely.

The final Christmassy offering for November is Elliot the Littlest Reindeer. When Blitzen unexpectedly announces his retirement, Santa needs to find a replacement quickly. Hearing the news, Elliot and his best friend, Hazel, set out to prove that he is the horse for the job.

100% Hotter is a makeover show with a twist - the makeover is more of a makeunder. The show features contestants whose out-there styles and head-turning looks are transformed to a more paired down aesthetic, much to the relief of their families.

The animated comedy centers on best pals Audrey, Dot and Lotta who are Harvey Street's guardians - the trio attempt to keep the street in order resulting in some wacky antics.

Finally, it's another one for the kids... Hello Ninja tells the story of best friends, Wesley and Georgie, and their cat sidekick, Pretzel, as they transform into ninjas and enter a magic world to save the day. Interested in what's already on offer on Netflix? Keep scrolling to learn more about the platform's creepy new thriller that's got everyone talking.
20%