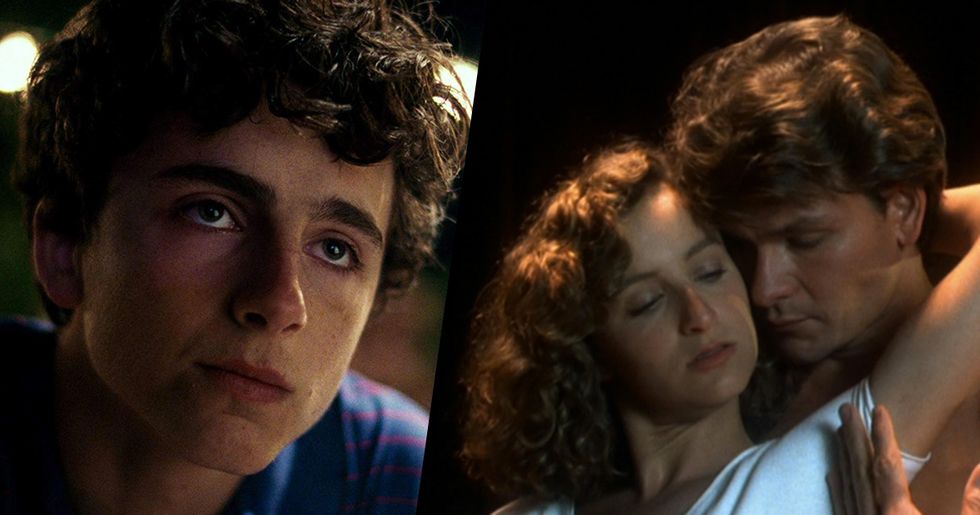 Everything Coming To Netflix This September

Just like clockwork, it's that time again! Netflix has added a whole host of brand new content to its ever-growing movie and TV selection. In recent months, their releases seem to have gotten better and better, and September is certainly no exception.

From returning old favorites like American Horror Story and The Good Place, to classic movies like Dirty Dancing, documentaries, comedy specials, and even stuff for the kids, there's an exciting array of binge-worthy watches for everyone.

Keep scrolling to see what's in store for you this month on Netflix.

First up is Korean action-thriller, Vagabond, which centers on stuntman, Cha Dal-geon, who gets involved in a devastating plane crash and ends up discovering a national corruption scandal in the process.

This true-drama series tells the real-life story of the exploits of Mossad operative, Eli Cohen, who infiltrated the highest ranks of Syrian society.

Dubbed as the Spanish version of Gossip Girl, Elite is returning to the streaming giant with a second season this month, and it's set to be full of intrigue, plot twists and a whole lot of mystery.

The second installment of the Keanu Reeves-fronted franchise is finally heading to Netflix. The movie follows retired super-assassin, John Wick, as his plans to live a quiet, understated life are cut short when Italian gangster, Santino D'Antonio, shows up on his doorstep.

This disturbing and controversial 6-part documentary shines a light on the shocking sexual and physical abuse allegations against the R&B singer, R. Kelly, all of which Kelly denies. The series features interviews with several women who recount their experiences with the singer.

Netflix is banking another series into its growing sci-fi-thriller selection with The l-Land starring Kate Bosworth and Magic Mike star, Alex Pettyfer. When a group of people unexplainably wake up in a mysterious land with no memory of how they got there, they face huge psychological and physical challenges as they try to find their way home.

Horror fans rejoice as there's a new horror-series coming your way this month and it looks pretty creepy. Marianne tells the terrifying story of a horror novelist who, after taking a break from writing, discovers the demon from her book exists in the real world.

Emma Stone narrates this insightful series that looks at the complex inner workings of our minds. From anxiety disorders to dreaming and memories, this series tells it all.

After 6 long years, Top Boy, which follows the rise of Dushane and his friend, Sully, in the dangerous underground drugs business, is making a highly-anticipated return to screens.

Of course, with the new American Horror Story heading our way later this year, the previous season, AHS: Apocalypse, has been added to Netflix to fulfill all our binge-watching needs.

Fans of the BBC drama will be thrilled to know that season 7 is coming to Netflix. The latest season, which originally aired in the U.K. last year, saw the introduction of new midwife Lucille, played by Leonie Elliott.

David Brent: Life on the Road

This film catches up with Brent twelve years after the airing of the original The Office to find he is now a traveling salesman. Nevertheless, he hasn't given up on his dream of rock stardom just yet and is about to embark on a self-financed U.K. tour with his band.

Based on the Pulitzer Prize-winning article “An Unbelievable Story of Rape," Netflix's new true-crime series, starring Toni Colette and Kaitlyn Dever, tells the story of Marie, an eighteen-year-old woman who, in 2008, reported that she’d been bound by her own shoelaces and raped by a masked man at knifepoint. However, after many people, including her own foster mother, begin to doubt her case, she is pressured into retracting her claim and eventually charged with false reporting.

Featuring a star-studded cast that boasts the likes of Reese Witherspoon, Jared Leto, and Christian Bale, this cult classic follows a handsome, young professional named Patrick Bateman who lives a double life as a serial killer by night.

This Marvel series follows the Strategic Homeland Intervention, Enforcement, and Logistics Division, who assembles an elite team to find and deal with the villains that threaten existence.

Starring comedy-natives, Seth Rogen, Jonah Hill, and Michael Cera, this 2007 comedy follows 2 inseparable pals as they navigate the last weeks of high school and are invited to a huge house party.

Piers Morgan delves into the minds of notorious serial killers that reside in maximum-security prisons to uncover what drove them to commit their heinous crimes.

Matt Groening's animated fantasy series is returning for a second stint and will see viewers once again transported to the crumbling medieval kingdom of Dreamland, to watch hard-drinking young princess Bean delve further into the faraway worlds beyond Dreamland.

This kid-friendly comedy sitcom tells the story of a rich nineteen-year-old named Kaylie who swaps stardom for court orders after she is forced to serve community service at the wilderness club at an inner-city middle school.

The Last Kids on Earth

This is another one for the kids. The animated adventure centers on thirteen-year-old Jack who teams up with his friends to survive the apocalypse after zombies and monsters invade his hometown.

This addictive Australian drama tells the story of 6 people returning from the dead to try to investigate the causes of what happened.

Call Me by Your Name

This romantic-drama has made its highly-anticipated Netflix debut. The movie tells the story of seventeen-year-old Elio Perlman, who falls in love with the much-older Oliver, while spending time with his family at their 17th-century villa in Lombardy, Italy.

A hip-hop producer is propelled into the dangerous world of organized crime when the record label that he signs to becomes the hub of a deadly drug business.

This tear-jerking movie tells the heartbreaking story of Anna Fitzgerald, who is looking to earn medical emancipation after being conceived as a bone-marrow donor for her older sister, Kate, who's stricken with leukemia.

Netflix's new comedy series centers on Payton Hobart, a wealthy student from Santa Barbara, who is adamant that, one day, he's going to be president of the United States, but must first win over the toughest crowd yet: the people of Saint Sebastian High School.

Hit comedy, The Good Place, is returning to screens for a fourth and final mind-bending season. The series follows the story of Eleanor Shellstrop, who dies and wakes up in “The Good Place" (or heaven, as we best know it), run by angel, Michael, but she quickly realizes that there’s been a mistake and that she should be in “The Bad Place."

Netflix is back at it again with their original teen movies. This time, former Dance Moms star, Ava Michelle, makes her big-screen debut as Jodi, the tallest girl in her school who has always felt like she didn't it in.

Between Two Ferns: The Movie

When acting legend, Will Ferrell, discovered aspiring-star, Zach Galifianakis', public access TV show, Between Two Ferns, and uploaded it to Funny Or Die, Galifianakis became a viral laughing stock. Now, he's on a mission to restore his reputation in his new Netflix movie, where he and his crew take a road trip to embark on a series of high-profile celebrity interviews.

Netflix is adding another comedy special to its growing catalog - this time, it's courtesy of Bill Burr and his stand-up show, Paper Tiger, where the star talks all things outrage culture, male feminism, and cultural appropriation.

Jeff Dunham: Beside Himself

Jeff Dunham and his famed characters Walter, Peanut, José Jalapeño, and Achmed hit the stage for this comedy special filmed live in Dallas.

The final in the handful of comedy specials hitting the streaming platform this month comes from comedian, Mo Gilligan, as he jokes about humble beginnings, family dynamics, and dancing in the club.

Netflix is releasing an original 3-part documentary on no other than Microsoft co-founder, Bill Gates, which aims to unpick what goes on inside the mind of the second richest man in the world.

We all love a good classic movie to watch on a Saturday night, and Netflix has us covered this month with the 1987 classic, Dirty Dancing. For those who have been living under a rock, the movie follows Baby (Jennifer Grey), who embarks on a boring getaway in a sleepy resort with her parents, but, when the resort's dance instructor, Johnny (Patrick Swayze), enlists Baby as his new partner, the 2 fall madly in love.

The hit comedy series is back with its eighth season and it's finally available to stream on the platform. That's our weekend sorted.

Ahead of all of the news about the post-apocalyptic drama's tenth season, Netflix has brought us The Walking Dead Season 9 to give us all our much-needed zombie fix.

Horror fans will be pleased to know the streaming giant has added another horror movie, this time it's The Last Exorcism, a chilling movie that centers on cleric Cotton Marcus, who decides to expose his chicanery through filming a documentary. But, when he visits Louis Sweetzer, who believes that his daughter, Nell, is possessed, Marcus soon realizes thag he has come face-to-face with real evil.

The hugely successful prequel to the Batman franchise is heading to Netflix for its fifth and final season this month. The final season will follow the heroes and villains as they fight for their survival, and will see Bruce Wayne come closer to his destiny.

Ah, you can't beat a good rom-com, can you? Netflix has come to the rescue to grant all our rom-com-themed dreams and is bringing us the 2010 drama, Eat Pray Love.

Finally, the family-friendly animated adventure, Open Season, has also been bagged by Netflix this month. The movie tells the story of Boog, a domesticated Grizzly bear, who finds himself stranded in the woods 3 days before Open Season. While this may be the end of what's coming to the streaming platform this month, why not take a look at some of the best existing shows on Netflix? From Grace and Frankie to Russian Doll, here are the best shows on Netflix ranked: