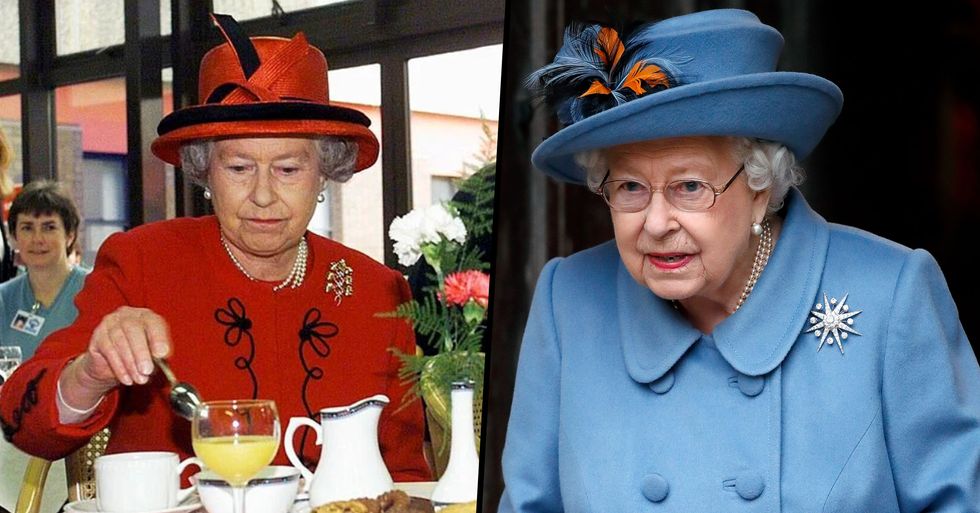 A former royal chef has revealed what the Queen eats (and doesn't eat) in a typical day... And, surprisingly, caviar isn't on the menu.

Most of us can only dream of being within the many walls of Buckingham Palace.

The royal castle has become the symbol of the British monarchy over the years, but only a small selection of people can actually claim to have been inside.

As most of you will know, the British royal family is one of the most prestigious families in the world...

So, of course, only a select few can enter their royal residencies.

Only incredibly powerful and important people have stepped foot inside Buckingham Palace...

But there are hundreds of staff members who are required to keep the palace running smoothly.

To specially selected chefs, hundreds of highly trained professionals have worked for the royal family over the years.

And now, one of them has drawn back the curtain to give a rare insight into the house of Windsor.

Darren McGrady was the Queen's personal chef for fifteen years between 1982 and 1993, wherein he accompanied her on 2 royal tours of Australia. He also cooked for 5 American Presidents – Ford, Reagan, Bush Snr, Clinton, and Bush Jnr – during their state visits.

He also cooked for many other members of the royal family...

Including Princess Diana, and her sons William and Harry at Kensington Palace.

So, when it comes to the royals' dining habits...

McGrady really does know it all.

And now, he has given us a rare glimpse into the royal menu in his book "Eating Royally: Recipes and Remembrances from a Palace Kitchen."

In his excerpt, McGrady revealed the Queen’s dining preferences, her favorite meals, and the things she is not too much of a fan of on the dinner table. Here's what he told us...

Firstly, how many meals does the Queen eat on a daily basis?

McGrady says the Queen has 4 meals a day - but only eats small portions at each. In a series of YouTube Q&A videos, he elaborated by saying that during his time as her personal chef, the Queen would eat breakfast, lunch, afternoon tea, and dinner.

It has previously been reported that the Head Chef would provide the Queen with a fresh menu twice a week...

And she could choose meals for her liking. McGrady confirmed that this menu was in place but, like any normal person, the Queen had her favorites dishes.

For her first meal of the day, the Queen likes to keep things simple with a cup of tea and biscuits followed by a bowl of cereal.

HRH allegedly enjoys grilled fish with wilted spinach or courgettes, according to McGrady. She is also partial to a simple grilled chicken with salad for a low carbohydrate option.

Then, in the late afternoon...

McGrady says the Queen will have an afternoon tea, in which she always has scones with jam and clotted cream - and she puts jam on first.

No matter the time of day, the Queen always enjoys scones.

McGrady recalled: “She’d always have afternoon tea wherever she was in the world. We’d flown out to Australia and were on the Royal Yacht. It was 5 o’clock in the morning but for the Queen, it was 5 in the afternoon so my first job was making scones."

And, secondly, what's the most important meal at the palace?

Friday fish and chips, of course! “Everybody loved fish and chips," explained McGrady. "All the staff, 300 staff at Buckingham Palace, all of the chefs would have fish and chips for lunch. But, forget your tartar sauce and your ketchup, we loved it with salad cream. Salad cream on those French fries, on those chips."

The corgis' meals were considered to be highly important, too.

McGrady told said: "One of the things that really, really shocked me when I got a job as the Queen's chef was that I wasn't straight away preparing banquets for kings, queens, and presidents. I was actually chopping beef, liver, and chicken for the Queen's twelve corgis. I later learned that was one of the most important meals of the day when it came to the Queen." On some occasions, he had to peel carrots for her horses at Balmoral, too.

Thirdly, what are the Queen's favorite foods?

The Queen apparently has a particular love for Morecambe Bay potted shrimp on toast. In a Q&A video, McGrady had said: "They're cooked and marinated in this secret spicy butter. And then the Queen would have them with warm toast, and when you spread them on the warm toast, the butter melts."

And, like most of us, she is a fiend for chocolate.

"She is absolutely a chocoholic," McGrady told Hello! magazine in 2016. "Anything we put on the menu that had chocolate on, she would choose, especially chocolate perfection pie [a layered chocolate pie with white and dark chocolate and chocolate shavings]."

But what about the foods she doesn't?

She's only human so, of course, there will be dishes she won't be too fond of. Well, McGrady says that the Queen never directly said she didn’t enjoy a meal, but she would leave a message in a notebook for the staff, instead.

How polite of her!

He explained: "She had a little book on her desk and she would just put a note in there saying ‘I don't want this again’ or something like that."

Her personal chefs learned quickly that the Queen isn't fond of "strong flavors"...

So ingredients such as garlic, onion, and spices. “It was [about] cooking dishes that the queen liked – for example, you could do a beef stroganoff and if she didn't like paprika in there, it became a dish without paprika because you’re cooking for that one person."

And Prince Philip had to put up with these ingredient modifications.

"The Queen eats to live whereas Prince Philip lives to eat," says McGrady. “He loves curries with lots of garlic and spices, a real foodie. But we could never do [two plates] ‘for your plate you’re going to have lots of garlic’, and ‘your plate, no garlic’, it was always down to the Queen, you have everything how she has it."

The Queen has never cooked for herself...

She enjoys the occasional tipple. Her preferred drinks are a gin and Dubonnet or a flute of champagne.

A Queen who hates garlic, that is. For more on royal family secrets, keep scrolling to hear what Meghan Markle's royal nickname is...