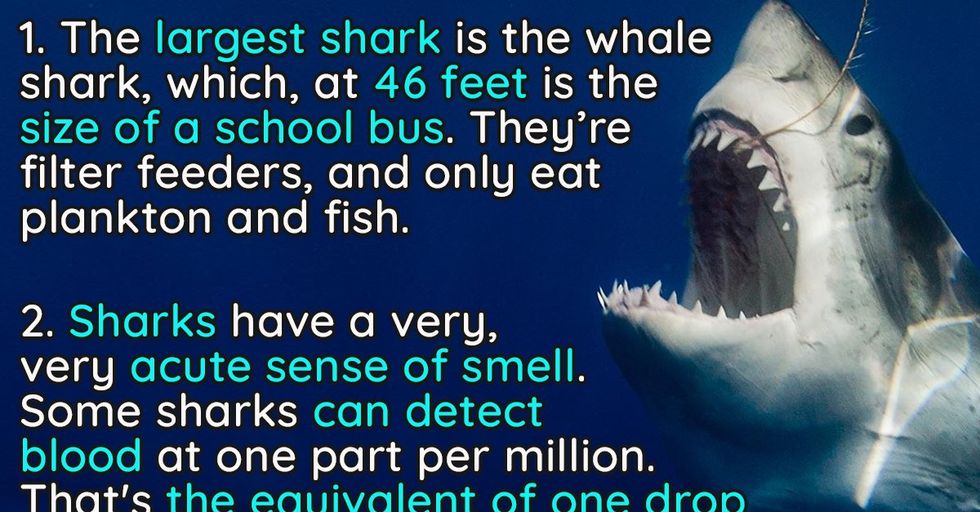 Sharks, the apex predators of the oceans.

Many people fear them for their reputations as gigantic man-eating predators, but not all sharks are man-eaters. In fact, not all sharks look like the image we have in our heads.

Here are a few interesting facts about sharks.

1. There's a massive size difference between the largest and smallest sharks

The largest shark is the whale shark, which, at 46 feet is the size of a school bus. Oh, and don't be afraid the whale shark's gonna come for you like the titular villain from Jaws. They're filter feeders, and only eat plankton and fish.
The smallest shark is the dwarf lanternshark, which, at 7.9 inches, can fit in the palm of your hand. Dwarf lanternsharks eat krill, tiny crustaceans and small fish.

2. Sharks are very different from other types of fish

They belong to a class of fish called Chondrichthyes – that is, cartilaginous fish. Sharks and other Chondrichthyes – rays and skates – have cartilage instead of bone skeletons.
Cartilage, by the way, is the bendy stuff that shapes your ears. It's also what your nose is made of.

3. Sharks have a very, very acute sense of smell

Have you ever heard the saying "sharks can smell a drop of blood from a mile away?" Well that one's actually false.
In fact, some sharks can detect blood at one part per million. That's the equivalent of one drop in an entire swimming pool.

4. Sharks don't breathe through their nostrils

Which, by the way, are on the underside of the snout. Instead, they use them exclusively for smelling.
Inside the shark's nose are skin folds known as the olfactory lamellae. They allow the shark time to register and analyze smells.

5. When a shark bumps you, it's trying to figure out if you're edible

There's a specific type of shark attack known as the bump-and-bite attack, where the shark basically circles and then bumps into you before biting.
This is known as a "test bite." Basically, what the shark is trying to do is to identify what its biting before it eats it. These attacks can be fatal.

6. Yes, great whites are the most dangerous sharks to humans

But there's a couple of others to watch out for too. The striped tiger shark has attacked humans 111 times and is very aggressive.
So is the bull shark, which, by the way, can swim into freshwater (so no, rivers aren't safe either). Then of course there's tiger sharks, which are both curious and aggressive, a very no bueno combination.

7. The shortfin mako is the fastest shark in the world

Clocking in at 60 mph, the shortfin mako is one of the sports cars of the sea, and it's definitely an aggressive one.
Even worse, it can catapult itself out of the sea at up to nine feet in the air – a behavior known as breaching. Oh, and by the way, shortfin mako are known to attack people too. How's that for nightmare fuel?

8. Shark skin is made to camouflage them

9. Sharks do not have to keep swimming constantly

Well, not all of them. While some sharks have to keep swimming in order for oxygen-rich water to pass over their gills, others use their pharynx, the membrane-lined chamber behind their nose and mouth to keep water (and therefore oxygen) circulating.
These types of sharks, like nurse sharks and wobbegongs, can rest comfortably on the seafloor without exerting extra energy. Oh, and by the way, others, like the epaulette shark, can literally walk on land.

And by messy, we mean deadly. See some sharks take about a year to gestate their young, and during this time, the babies cannibalize each other.
It's survival of the fittest inside a shark mommy's womb and only the strongest survive. Literally.