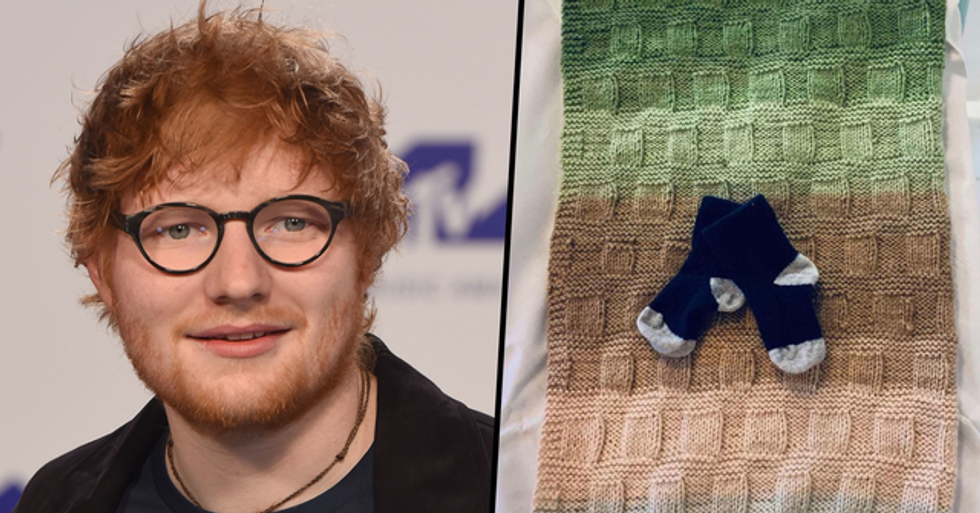 After the overwhelming backlash against Ed Sheeran's name choice for his newborn daughter, a name expert has spoken out in his defense and has claimed that the unusual name has a much deeper meaning than originally thought...

Ed Sheeran is officially a dad!

The beloved English singer song-writer has announced today that he and his wife have welcomed a daughter into the world.

Now, the "Shape of You" singer is notoriously private when it comes to his personal life...

But back in August, reports surfaced that Ed was expecting his first child with his wife, childhood friend, Cherry Seaborn.

The rumors were flying...

And, in typical Ed Sheeran fashion, fans were left waiting with bated breath for any confirmation of the pregnancy.

So, of course, people lost their minds today when Ed took to Instagram to announce that Cherry had safely delivered a baby girl.

Sharing a photo of a multi-colored blanket and a pair of minuscule socks, the singer wrote: "Ello! A quick message from me as I have some personal news that I wanted to share with you... Last week, with the help of an amazing delivery team, Cherry gave birth to our beautiful and healthy daughter."

Well, it's certainly an unusual one, to say the least. Fans have been quick to criticize the quirky name choice but, now, an expert has come forward with a pretty eye-opening explanation. But he certainly isn't the first celeb to name their child something out of the ordinary...

Or how about Bear?

Many still can't get their heads over the name!

But, putting the haters to one side...

An expert has come forward to claim that the unusual name actually has a very sweet meaning behind it.

Baby name expert, SJ Strum, from Channelmum.com, has weighed in on the quirky name choice...

And has actually spoken out in Ed and Cherry's defense.

Firstly, the name Lyra has its roots in Greek mythology and it means lyre, a small harp...

Not a bad choice for an accomplished musician, right?

But there's more to it than that.

SJ said that the singer had chosen a "powerful" middle moniker for his daughter. Speaking to Fabulous Digital, she explained: "Antarctica is a stunning name – wonderfully feminine while still cool and crisp and classy."

She went on to explain how the name is "on trend" for parents naming their children after locations...

And elaborated: "Ed recently took place in the One Earth charity single to raise awareness of climate change so it’s likely Antarctica references this ethics here. It’s so powerful to name a newborn after one of the most remote yet vital places on the planet."

“Alongside this, Antarctica is a unique place on earth and so far it’s a unique baby name – which is what most stars strive to achieve in their child’s moniker."

Congratulations, Ed and Cherry! For more baby name blunders, and why Amy Schumer had to change her son's name, scroll on...