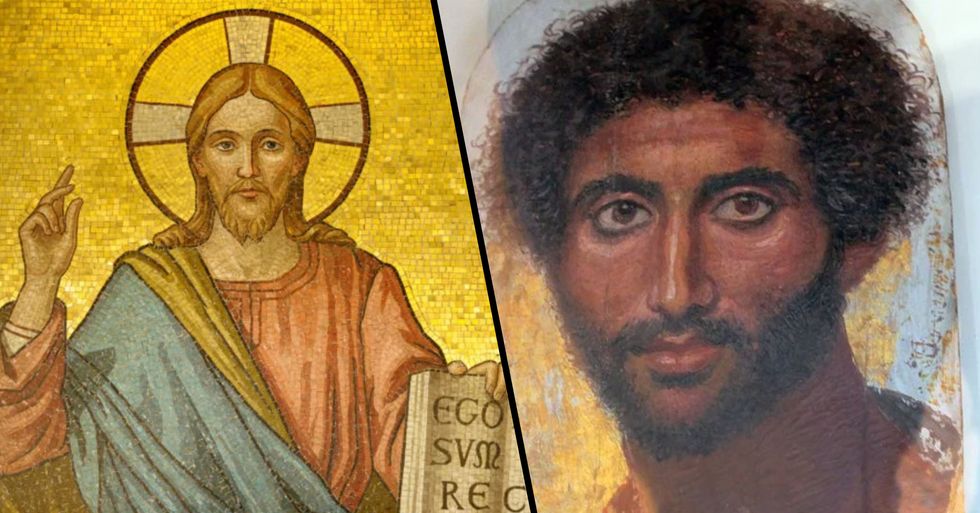 Expert Shares Image of What Jesus Would Have 'Actually' Looked Like

When you think of Jesus, the image of a white man with blue eyes, long dark hair, and a beard probably springs to mind. After all, it's the image many of us have been presented with all our lives.

But this couldn't be further from the truth, according to a professor who is claiming Jesus would look nothing like we imagined him to.

The expert has also shared why all previous depictions of Jesus are totally inaccurate. Keep scrolling to take a look at the image showing what Jesus would have "actually" looked like...

For centuries, Jesus has been depicted in the same way.

A white man with blue eyes, long hair, beard, and colorful robes is often the image which many of us associate with the son of God.

This depiction is everywhere...

On the stained glass windows of churches, Bibles adapted for children, and even on television.

All in all, they're all variations of the same man.

And no one really thinks to question the accuracy of it.

But there are some things that just don't make sense with this image of Jesus...

One of the main things being that he is depicted as being white-skinned.

And over the years...

Historians and experts alike have tried to set the record straight and uncover what the real face of Jesus would have looked like.

And in the case of people daring to present an alternate depiction of Christ?

They are often dismissed over the popular portrayal.

The image of Jesus we are all so familiar with actually comes from the Byzantine era, from the 4th Century onwards.

And what does this mean? Well, according to the BBC, "Byzantine representations of Jesus were symbolic - they were all about meaning, not historical accuracy."

But this week, a professor has spoken out about why everything we've seen is totally inaccurate.

Joan Taylor, who works as a professor of Christian origins and second temple Judaism at King’s College, London, has put her kneck on the line to dismantle the existing image of Jesus we all have in our minds.

And her findings are hugely different to the depiction we've been presented with for thousands of years.

She even shared a photo of what the son of God would have actually looked like. Keep scrolling to take a look.

Professor Taylor talked in more detail about her research in a recent article...

In an article for American Schools of Oriental Research, Professor Taylor explained: "Everyone knows what Jesus looks like: he is the most painted figure in all of western art, recognized everywhere as having long hair and a beard, a long robe with sleeves (often white) and a mantle (often blue)."

The subject of what Jesus "really" looked like has been of huge interest for experts.

"But what did he really look like, as a man living in Judaea in the 1st century? This subject has long been of interest," she added.

There a number of key differences in the picture of what Jesus "actually" looked like.

In fact, it couldn't be further from the centuries-old depiction. "It is worth emphasizing that images of Jesus over time give us clues on how Jesus was imagined in different environments, but say absolutely nothing about what he really looked like," Professor Taylor explained.

Firstly, Professor Taylor pointed out his clothing would have been dramatically different.

Jesus would have apparently worn plain clothing as opposed to the colorful robes we often see.

His hair would also look different...

According to Professor Taylor, Jesus' hair would be much shorter.

Though there is one thing that may be accurate about the traditional image of Jesus...

... his beard. Professor Taylor explained that the Messiah would indeed have a beard, but that it would likely be shorter than what it's usually portrayed as.

And the biggest difference?

Jesus would have darker skin, which, if you think about where in the world he's from, makes total sense.

In fact, it's a point many have made online in the past.

This certainly isn't the first time the idea has been put out there.

Professor Taylor explained that the traditional image of Jesus has derived from the likes of Zeus.

She then went on to share a picture that most realistically shows what Jesus would have looked like.

And it's a huge contrast to the image we're used to seeing.

According to Professor Taylor, this is the most realistic depiction of Christ. Netflix recently caused a stir after they portrayed Jesus as gay in a new show. Keep scrolling to see how they responded to the backlash. A petition has even been launched...