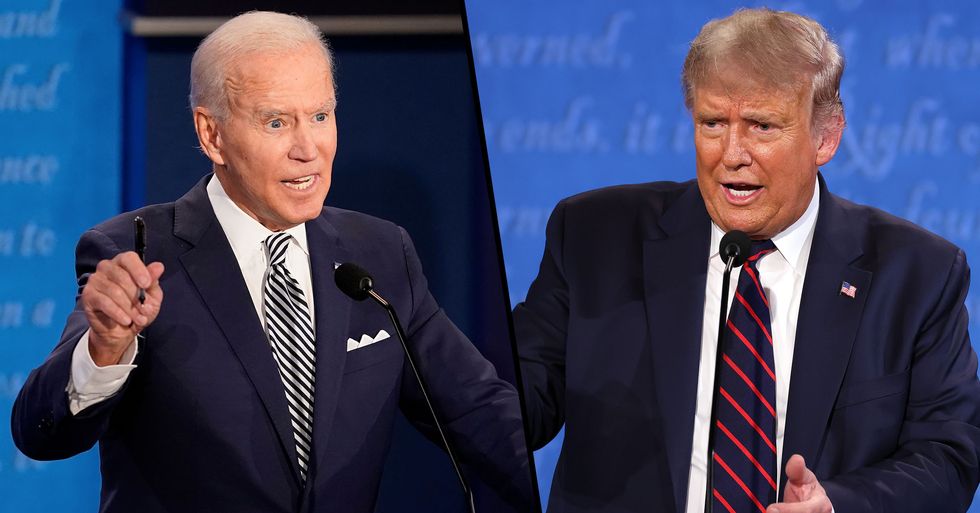 Experts Decide Who They Think Won the First Presidential Debate

President Trump and Democratic candidate, Joe Biden, went head-to-head last night for this year's first presidential debate - and it's safe to say, the internet is feeling stressed out.

But now some experts have weighed in on who actually won...

As we very well expected, things were quick to turn ugly.

There was another moment that shocked viewers.

He then followed up with, "This is so unpresidential," after which Wallace ended the segment. And the internet had a lot to say ...

not even watching the debate cause i truly don’t have the mental capacity rn but my non american ass is stressed for all of u i’m so sorry
— melanie (@melanie)1601432911.0

Well, the New York Post asked some experts to rate the candidates across a range of issues - and the results may surprise you.

"Remauro: Biden wins this one by appearing fatherly by defending his son against an aggressive Trump attack regarding Hunter’s addiction. Way too personal. Trump error — Trump C-/Biden B+ Benjamin: Trump seeks to cast Biden as a career politician, while defending his own record on the economy and deflecting on the COVID crisis. Biden uses the old “are you better off now" standard, gets hot under the collar when Trump attacks his son, but — to his credit — doesn’t lose it completely. Neither comes out the clear victor here — Biden: C/Trump: C Mackowiak: I don’t even remember this section. This whole debate was a mess. — Biden: C- / Trump: C-"

On the Supreme Court:

"Remauro: Trump by a hair. Even though Trump was hyperbolic and argumentative, he explained why he was within his rights to appoint his nominee. Biden capably turned the discussion to the Affordable Care Act but bungled his thoughts and didn’t land his punch. Biden deftly skipped over answering the ‘pack the court’ question but I don’t think that helped with his base — Biden: C / Trump: B Benjamin: Trump comes out swinging in this opening question and unapologetically employs the “to the victor goes the spoils" argument. Biden off to a weak start, though he pivots to protecting the Affordable Care Act – a significant Democratic touchstone — Trump: A-/ Biden: C Mackowiak: The most important moment was Biden refusing to deny he would pack the court. — Biden: C- / Trump: B-"

"Remauro: This is a draw. Biden hit all his talking points and evoked emotion for lost loved ones. Trump landed punches pointing out Biden mishandling of H1N1 and that Biden didn’t want to shutdown the country early. Both fed their base — Trump: B / Biden: B Benjamin: Trump is on the defensive and falls back on blaming China, loses points by criticizing Biden for wearing a mask while his own family members sit in the audience wearing masks. Biden, who has no record to defend here, scores some direct hits, appeals to families who have lost loved ones to COVID — Biden: A-/Trump D Mackowiak: Biden made Trump play defense. He prosecuted the case effectively — Biden: A- / Trump: C-"

"Remauro: Trump wins this one by reminding people that Biden wants to keep the economy shut down, Biden basically agrees but gets in a shot for his base when he says only billionaires are making money now — Biden: B / Trump: A Benjamin: Trump deflects, seeking again to shift blame for the COVID-induced economic crisis by pointing at Democratic governors who haven’t fully opened their states. Biden again plays to the left, where he needs to shore up support, by going after millionaires and billionaires who have prospered during the pandemic. Also smartly pivots back to the COVID crisis — Biden: B+/Trump: C Mackowiak: Trump won this exchange by making forceful arguments defending his record and criticizing the weak recovery during the Obama-Biden years — Biden: C / Trump: B+"

On racism and law enforcement

"Remauro: Trump wins this one because he brought the conversation back to law and order and reminded viewers that the violence in the street was sparked by BLM protests, which concerns the base of both men. Biden never landed a punch, though he was eloquent in his opening statement — Biden: C / Trump: A Benjamin: Trump leans into sending federal troops into cities roiled by racial unrest and protests, scores some points with the right by accusing Biden of being anti-cop and too cowed by the left, but refuses to outright denounce white supremacists. Biden tries to walk a delicate line by denouncing violence AND racism, but comes out wishy washy on both. Neither was terribly strong here — Trump: C- / Biden C– Mackowiak: Trump was fairly effective here. But he missed an opportunity to call out white supremacists by name — Biden: B- / Trump: B"

"Remauro: Trump by a hair, because Trump, Biden and Wallace agreed that the election wouldn’t be decided on Election Day and the viewers were left with unanswered questions about whether the paper ballots could be counted properly. Biden: B- / Trump: B Benjamin: Biden takes the high road and promises to accept the outcome of the election, while urging Americans to vote and promising to call for calm as ballots are counted – a strong moment for him. Trump again raises questions about the veracity of the results, makes unfounded allegations of widespread fraud and seeks to undermine the very foundation of small-d democracy — Trump: D / Biden, B+ Mackowiak: Neither won and neither lost on this subject — Biden: B / Trump: B"

It seems overall, both participants underperformed and there was no overall winner.

We wonder what it'll mean for the election...