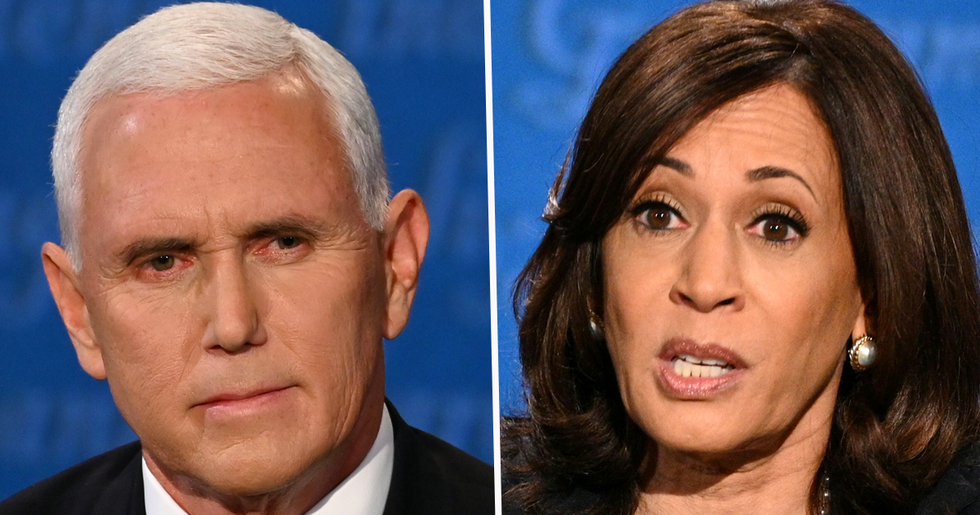 During the year's first and only Vice Presidential Debate, there were a lot of controversial moments. But now experts have weighed in on exactly who they think triumphed...

The debate was packed full of memorable moments.

The Democratic challenger has become somewhat of a meme today after her hilariously relatable reaction to Pence mansplaining her.

It was an explosive evening, to say the least.

Firstly, viewers relished the California senate politely but firmly put Pence back in his place.

But, in between the policy talk, many viewers had one big takeaway:

Harris's facial reactions when Pence repeatedly interrupted her were nothing short of iconic.

Every time Pence adopted one of Trump's favorite tactics by interrupting or talk over his component...

Harris would pull the same face each time, and people are living for it.

Here's a snippet of her in action.

The glare, the hair tuck... Everything about this is perfect.

She pulled many faces throughout the evening...

And everyone of them was as scathingly iconic as the last.

Twitter users are calling for this image to be the universal response to mansplaining...

Can we make this a universal meme for responding to mansplaining https://t.co/JkrVVIZSht
— Kelsey (@Kelsey)1602123163.0

And we are all here for it.

And it seems it's already becoming just that.

Kamala Harris - thank you for providing us the most relatable reaction of all time.

Well, the New York Post has asked the experts - with some rather interesting results ...

"Mackowiak: Harris opened strong on COVID, but Pence effectively presented the administration’s case for how it has saved lives. — Pence B+ / Harris B Soufer: Harris gave aspiring politicians a master class on how to dismantle your opponents’ record of failure. Pence did fine given his team’s record, but offered nothing new for moderate Republicans or swing voters. — Pence F / Harris A– Remauro: Pence wins this one because he managed to turn Harris’ claim that the administration didn’t do enough into an assault on the American people who sacrificed to stop the spread of the virus. Meanwhile, Harris reverses whether she would take the vaccination. — Pence A / Harris C"

"Mackowiak: Pence rightly focused on the Biden-Harris plan to increase taxes by $4 trillion. — Pence B+ / Harris B Soufer: Pence made the usual case for the three years of job gains, but couldn’t muster a coherent plan for what they’ll do to get us out of this mess. — Pence C- / Harris A– Remauro: Pence wins this one clearly. He put Harris off her game when he stated that she and Biden would raise taxes on middle America. — Pence A+ / Harris C"

"Mackowiak: Not sure either side won points here. — Pence B- / Harris B– Soufer: Harris spoke passionately about the tragic consequences of systemic racism and how our country has, and still can, come together to address it. Pence riffed on violence before stumbling into a line about the grand jury process, which no one knows or cares about. — Pence F / Harris A Remauro: Pence wins this one. Even though Harris passionately lays out the deaths of Breonna Taylor and George Floyd, Pence manages to remind her that she refused to vote on the Tim Scott bill, then brings up her record of prosecuting more black men than white and Hispanic as a prosecutor and district attorney. — Pence A / Harris B"

"Mackowiak: Pence’s key moment came when he asked Harris about packing the court — and she declined to answer twice. Harris’ moment came when she hammered pre-existing conditions. Soufer: Harris on healthcare — they’re coming for you. And saying she wouldn’t take the coronavirus vaccine if Trump said to. Remauro: Pence dropped the hammer on Biden by recounting his plagiarism problems and dominated during the foreign affairs segment. Harris did better with the healthcare message driving here point home clearly and striking fear into viewers who may have pre-existing conditions."

"Mackowiak: Pence interrupting enough that the moderator had to reiterate the rules. Harris undermining confidence in the COVID vaccine. Soufer: Pence talking over both women despite audible appeals to let them speak. Harris making the case a bit too passionately that she and Biden won’t end fracking, which could alienate some progressives who don’t understand the politics of fracking in a handful of swing states. Remauro: Pence never really defended the administration’s reasoning for the Supreme Court case. Harris was visibly angry and rattled often during the debate. She had many scowls."

And, finally, the most important topic - the fly.

"Mackowiak: It wasn’t wearing a mask. Soufer: We all owe a debt of gratitude to that brave fly for finally giving us something to laugh about together in 2020. A+ Remauro: The fly that landed on Mike Pence’s head seemed to like what he was saying as well."

A mixed bag, overall... Want more from the election? Scroll on...