19 Extremely Confusing Pictures That Will Make You Laugh | 22 Words 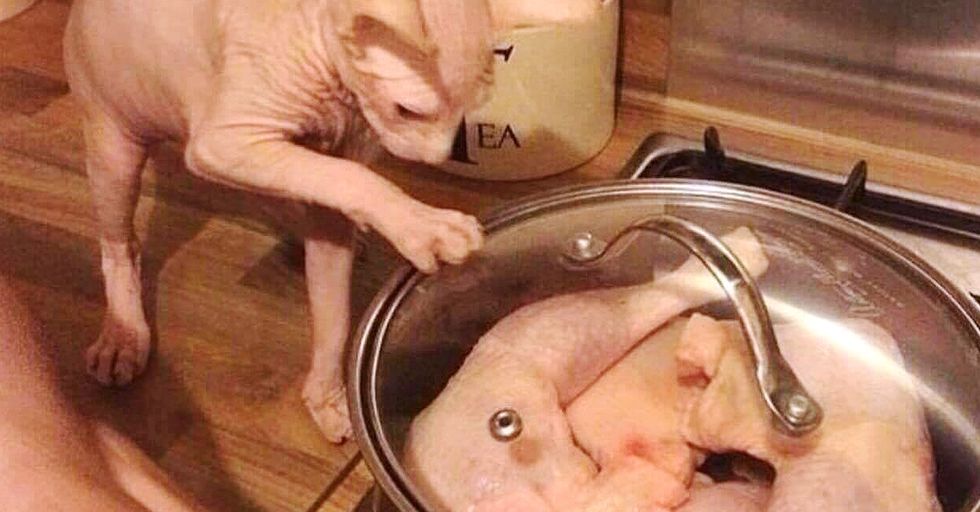 19 Extremely Confusing Pictures That Will Make You Laugh

We at 22 Words are purveyors of the weird and the wonderful.

Others will make you turn your head and drop your jaw.

But one thing is for certain: You will not be able to stop scrolling through this bizarre collection of oddities. Without further ado, here is...

Where does the hairless cat end and the raw chicken begin? We may never know.

Is he preparing to be attacked by a dog? Why would one do this?

There are so many things wrong with this sign. As a lover of grammar, I cannot even begin to explain how heartwrenching this is.

These "barely there" jeans

"Barely there" indeed. How much do you want to bet they still cost at least $100? The next one is truly unsettling...

At first, it seems like a normal photo of a hand gripping a water bottle. But upon closer inspection, this photo is far from normal and far from OK.

Why is this a thing?! The only scenario this makes sense for is if you're trying to avoid vampires, and they're not real.

This is what happened when Bert left Ernie. Ernie became so depressed he stopped going out, started getting terrible circles under his eyes, and stopped washing his clothes. Really sad.

I mean, look at him. He totally devours little kids. The next one, though, is equally as scary...for different reasons...

This demon in the t-shirts

Fun fact: If you look into the eyes of a t-shirt demon, you have seven days to live unless you then put all the t-shirts on at once and dance around yelling about how you're wearing eight t-shirts.

I know this is supposed to be funny and I know they did it as a joke, but this is really just making me uncomfortable.

Whatever you're imagining it tastes like, that's what it probably tastes like. Moving on quickly so I don't gag.

Here's the thing: You can't just remove a booted wheel from a four-wheeled vehicle and then drive off?! Unless there's a spare involved. Whatever happened, this is a ballsy move.

Yeah...like half of those heroes aren't from the Marvel universe. Who wants to tell the guy who definitely just spent hours getting this done? The next one is just plain funny...

Get it?! Because they're Frozen!

Yes, that is a person kneeling at the altar of a giant Mr. Potato Head that is seemingly in a park somewhere. Don't ask; I have no answers.

How did the trucks get like that? Are they napping or is this some sort of truck graveyard?

Why is this monkey so photogenic? I haven't taken a picture that good in years. Share this with someone who deserves a laugh!