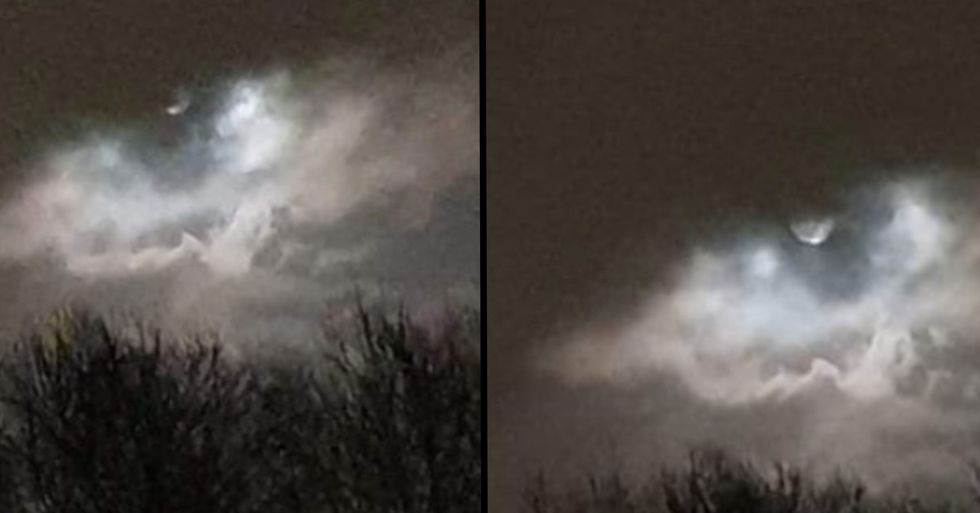 'Eye of the Storm' Captured in Incredible Photos of Full Moon

There's nothing quite so relaxing as a beautiful full moon. There's something mystical about that glowing orb in the sky. But one full moon image with a difference has gone viral this week - and let's just say it's more frightening than calming!

It's amazing what the earth can do when left to its own devices.

And there's one sight the world never gets tired of.

Looking up to the skies can always be a source of inspiration and wonder.

The sun is obviously a big hitter.

It's a real beaut, and can make the sky look absolutely breathtaking.

Honestly, we could watch the skies all day.

Sunrise, sunset, the ever-changing moon - there's so much to see!

But one view from the skies has the internet freaking out.

Because the latest image of a full moon to go viral is a little bit more terrifying than the usual fare.

It was taken during a storm.

The UK has been absolutely battered by bad weather in the past couple of weeks.

WHich hasn't been particularly pleasant.

Freezing sideways rain and gale-force winds aren't our idea of a good time...

But there was a bright side.

Storm Ciara (or storm Sabine) made for some pretty epic photography.

And one picture in particular has gone viral.

Because it's not just your regular storm shot. It's so much more.

The snap was taken in Bolton in the north of the UK.

And the full moon surrounded by the clouds looks almost like an optical illusion.

The full moon peeks out from behind the stormy clouds...

And it looks almost exactly like an eye in the sky. Crazy!

And we all know what an eye in the sky means?

Obviously, that God (or some other divine creature) is looking down at us, right?

People have gone wild for the pictures.

Many believe they're symbolic.

Hey, when you look at the state of the world ...

Some have made this comparison.

"Reminds me of the fallen angel painting," wrote one Facebook commenter.

Here are the famous photos.

They were taken by forty-eight-year-old Sarah Hodges on the evening of February 11th.

She posted them on Facebook where they quickly went viral.

"I know I got lucky, people spend thousands on cameras to get the perfect shot. I feel overwhelmed and proud, as it’s a once in a lifetime shot… which I do understand."

Some have been quick to dispel the superstitions.

Honestly, the skeptic within us probably agrees with her...

But there is one thing we can agree on.

This is a totally awesome shot! Fancy seeing more amazing amateur photography? Scroll on for a famous internet creation who appeared in one woman's vacation shots ...