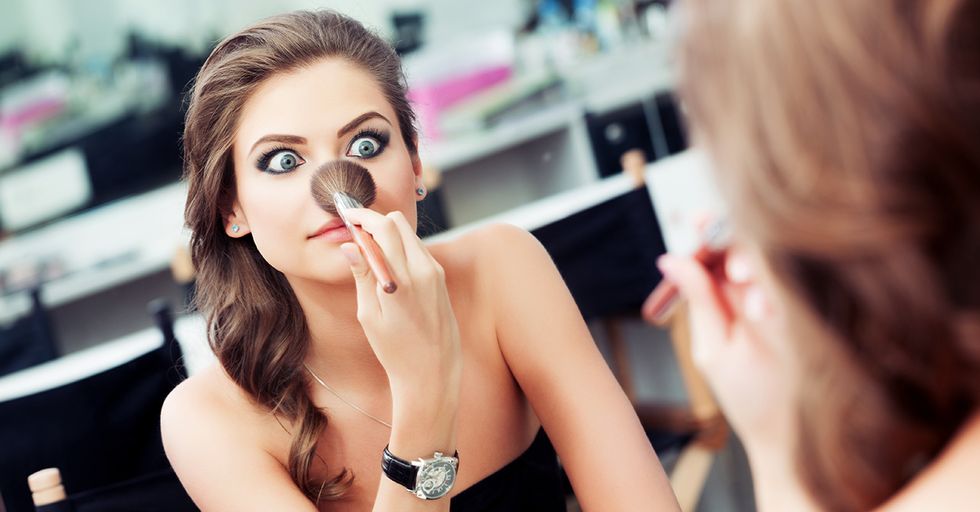 Makeup is pretty dang wonderful. Not only can it help you achieve high-fashion looks and super fancy style, it's also just a bunch of fun to buy and try (and buy some more).

But some people don't seem to get that.

People who enjoy wearing makeup often hear things like, "you don't need to wear makeup to be beautiful," or "you wear too much makeup."

This is the perfect response to comments like that:

But in case you don't have any bright fuschia lipstick handy, here are some more hilarious jokes for everyone who's been told they don't need to wear makeup.

Sometimes you manage to keep the rage hidden deep inside.

But just because you're not outwardly showing how mad you are doesn't mean you're not absolutely livid. Who do these people think they are, anyway?!

Here's some good advice for guys who don't like much makeup:

And don't forget to blend. Now get outta here.

I don't remember asking for your opinion.

Some people are going to tell you you're wearing too much highlighter. You know what you do in that situation? Put on more highlighter.

Seriously, don't listen to the haters.

Grab your favorite palette (or three) and put on your face for the day. And if you still need some responses that are absolute fire, read on...

That's interesting. I prefer fewer irrelevant opinions being shared with me when I didn't ask for them.

Next time you're looking for a good pair of false lashes:

Keep your eyebrows on fleek and your highlighter set to stun. Those haters won't know what hit 'em.

Wow. What a hot take. I've never heard that opinion before. No, wait, stop. Keep telling me how I should look instead.

If I don't answer, feel free to leave a message for me to not listen to. Some people are under the delusion that people only wear makeup because they're insecure. Well, I've got news for them...

Nice try. Don't let the door hit you on the way out.

News flash: Most people don't wear makeup in order to impress their significant other. Or anyone else, for that matter.

And for anyone who thinks makeup is "dishonest"...

Take a good long look in the mirror and repeat after me: "That's a dumb thing to think." Also, take some time to familiarize yourself with what a face looks like so you won't be "fooled" by someone wearing eyeshadow.

It could be way worse.

The one semi-legit complaint against a makeup habit is that it is hella expensive. But come on. It could be so much worse.

And as long as you're spending your own money on it...

Who the heck cares? Some people take things even farther and complain about literally anything that touches your face...

Joke's on them. The chapstick was only the first step of my hour-long makeup process.

Not liking makeup doesn't make you some kind of hero.

Here's another news flash for ya: You don't have to tell people how they should look in order to adhere to your own personal beauty standards. Rather than doing that, I recommend you just sit back and keep your opinions to yourself. And maybe throw in a Sephora gift card.

Here's what happens the one day you don't wear makeup:

You seriously can't win. It's almost as though society has worked for years to trick women into thinking they're not beautiful without makeup while simultaneously shouting at them that they don't need makeup in order to be beautiful. How does that make any sense?

Here's a pep talk for your makeup:

You're a strong, independent bronzer and you don't need no woman to slay. You just keep doing you.

Because when it comes right down to it:

Makeup is fun. You don't need a reason or an excuse to wear it (or to not wear it!) Share this with someone you know is tired of hearing the "you don't need makeup" line!