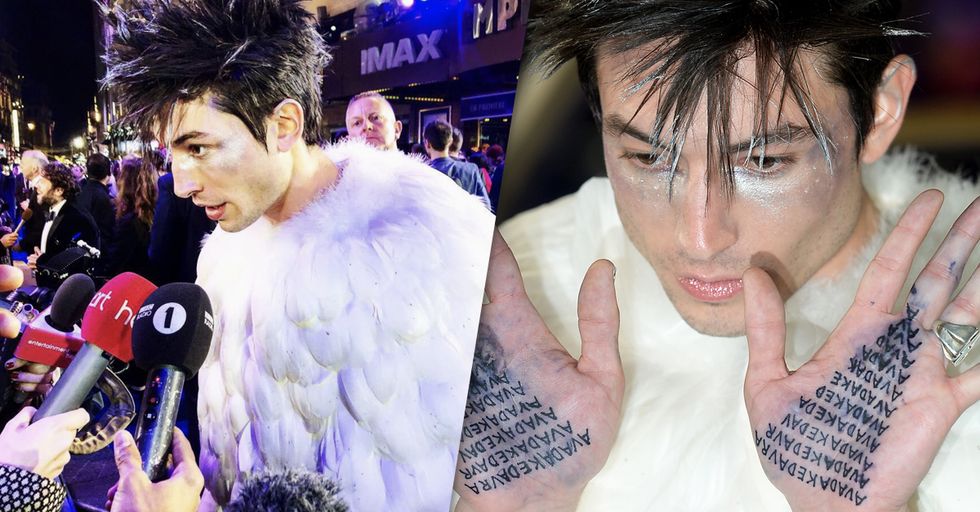 Are you excited about Fantastic Beasts: The Crimes of Grindelwald coming out this week?! If you're a Harry Potter fan then it's a pretty big deal!

But do you know what's an even bigger deal? Bigger than centaurs or goblins or pixies or whatever fantastic beast you can think of. Bigger than Eddie Redmayne's gorgeous yet confusing lips. Bigger than the ride Harry Potter World will inevitably build where you have to run from Grindelwald.

The answer is Ezra Miller. Well, specifically the outfit Ezra Miller wore to the premiere of Fantastic Beasts: The Crimes of Grindelwald in London. It was a pretty big deal. Over here at 22 Words, we're big Ezra Miller fans. He's a fascinating human being– although he once said in an interview he "barely identifies as human" which is obvious because he is above all of us.

The movie premiered in London this week.

"The Crimes of Grindelwald" is the second movie in the Fantastic Beasts Franchise.

At the London premiere, Ezra Miller showed up in a pretty amazing outfit.

You might even say it was magical. (I'm sorry).

He walked the blue carpet dressed in a head to toe white outfit covered in feathers.

His hair was spiked, and he wore shimmery silver makeup and hair dye.

But there was something even more important about his outfit.

It was a huge reference for Harry Potter fans.

Can you see why?

First of all: he had "Avada Kedavra" written on his palms.

Which every Harry Potter fan knows is one of the Unforgivable Curses.

It's what killed Harry's parents and another very important character in the HP universe. A certain feathery character who brings Harry mail.

None other than Hedwig.

Harry's owl who was (spoiler alert) very unfairly killed off in the 7th book. (I'm still not over it).

If you look closely, he is wearing an owl ring.

And the curse on his hand is exactly the one that *sobs* killed Hedwig.

All he's missing is some mail.

People were psyched about his look.

Harry Potter fans were very into it.

It's hard to pull off a giant owl sweater.

But people thought he looked great.

Who he was dressed as was not lost on true Harry Potter fans.

And fans can tell he is one of them.

This is clearly a man who not only knows what house he is in, but has spent his weekday afternoons scanning Harry Potter message boards for fan theories.

Someone even pointed out what he had written on his shoes.

The attention to detail is here is unbelievable.

This isn't the first time Ezra has shown up to a premiere in a memorable costume.

In early November, Miller showed up to the Paris premiere in a giant sleeping bag coat.

How does he pull this off?

He is a sassy sleeping bag and he looks amazing.

People love all of his red carpet looks.

And trust me, there have been many.

Just for fun, let's take a look at some of his past fashion choices.

There was this dazzling jacket he wore to a Vogue event.

Here he is in a skeleton suit.

With the Avadra Kedavra triangle underneath.

Yes, the pants are skeleton, too.

The cast was surprising fans at a screening.

This is what he showed up in at Comic Con.

It honestly works. I'm digging it.

Here he is promoting The Justice League.

This one is more subtle, but still amazing.

Here he is at the premiere of the first Fantastic Beasts movie.

That sparkly jacket is everything.

Because they are amazing, as is he.

Oh and did I mention he was in Playboy?

He's a force of nature.

And looks amazing in those bunny ears.

Welp, how can anything top this?

We can't wait to see what Ezra wears next! Share this with someone who is an Ezra Miller fan!
20%