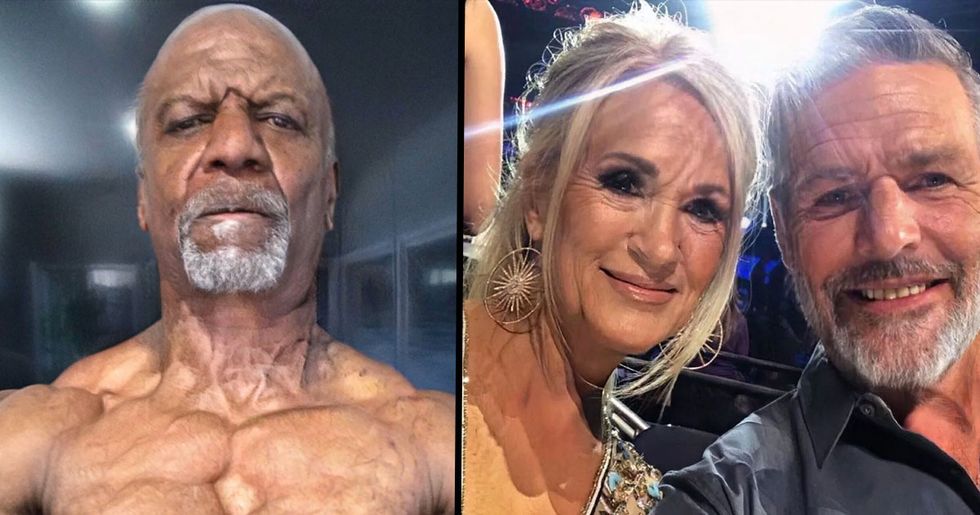 The latest trend to storm the internet is the hilarious Faceapp. It's a clever photo editing app that allows users to make themselves look old - and in a surprisingly convincing way. Many have gone wild with the software, taking snaps of both themselves and of some of the best-known celebrities out there to gain a unique insight into the future.

But, as the app continues to grow, many have noticed something that just doesn't seem quite right. It's all well and good making the Jonas Brothers look eighty, but what if we told you that all is not as it seems. Turns out, there is something more frightening than seeing yourself as an elderly person.

And now, the app has responded to these frightening allegations.

In recent years, photo editing has become more accessible than ever.

Now it seems like anyone can mess with their images - no matter how non-technically skilled they are.

And it's getting easier and easier.

While many used to rely just on adding an attractive filter, with apps like Facetune, we can essentially make ourselves look completely different.

This tends to be a way to make us look more attractive.

But, once in a while, an app will come along that gives us quite a different opportunity - to make us look much, much worse. Such is Faceapp, a recent trendy tool that effectively ages our faces.

And the results have been pretty funny.

Sure, the software has been around for a while - but Faceapp has truly finessed the art, creating the most realistically-aged images that the internet has ever seen.

And people have been sharing their results online.

The fact that the app allows us to input any picture means that we've all gone the exact way that you'd imagine - aging up our favorite celebrities.

Many have taken the opportunity.

In fact, it seems almost as though every single celebrity has been aged up using the app - and if you're curious about your favorite, scroll on, they're almost definitely on our list.

But it's also been a source of many jokes.

For example, this one, dealing with Pharell's seeming inability to age - even with the help of a deliberate photo editing app!

Others have joked about the intense popularity of the app.

It is odd how quickly and intensely an internet trend can seem to take over the world - only to fade into obscurity moments later.

But some have noticed that the app has a darker side, too.

Many who have downloaded the app have noticed that their phones aren't working quite as they used to.

There have been a few rather worrying reports.

Some have pointed out that their other social media accounts have been hacked once they downloaded Faceapp to their phone - and it seems too common to be coincidental.

But now people have done some digging.

The first thing that the internet discovered was that Faceapp is a Russian owned company.

But then users took a closer look at the privacy info that the app supplies.

And it's pretty scary stuff. “You grant FaceApp a perpetual, irrevocable, nonexclusive, royalty-free, worldwide, fully-paid, transferable sub-licensable license to use, reproduce, modify, adapt, publish, translate, create derivative works from, distribute, publicly perform and display your User Content and any name, username or likeness provided in connection with your User Content in all media formats and channels now known or later developed, without compensation to you."

We live in a world wherein privacy seems harder and harder to come by.

But the idea that we are essentially signing our faces away in return for a cheap laugh is a little scary.

Many are now regretting their decision to download the app.

Many are also concerned that holding the app on their phone allows it access to all sorts of delicate information, which will then be fed back to companies for marketing purposes.

So, will you be removing it from your phone?

It seems as though this may be the safest course of action. Although we are still happy with the hilarious aging celeb content the app has given us already.

The allegations have only grown worse over the past few days.

Re: FaceApp, can’t speak to it “uploading” photos but the app is definitely able to access my library even though I… https://t.co/R4NyHnLqmu
— Karissa Bell (@Karissa Bell)1563320638.0

Many have noticed that the app seems to have unprecedented access to their entire photo library - even when this is explicitly denied by the app user.

Although it doesn't seem like this is actually illegal.

So apparently apps *can* access pics even if permission is set to “never” (this is the first I’ve encountered that… https://t.co/QoqJdPGBRP
— Karissa Bell (@Karissa Bell)1563330858.0

And Faceapp has defended their position in a statement on the issue. The company claims that it “might" store the photos that users upload for reasons surrounding “performance and traffic." “Most images are deleted from our servers within 48 hours from the upload date," it (vaguely) specifies.

Here's their full (and rather confusing) statement.

"1. FaceApp performs most of the photo processing in the cloud. We only upload a photo selected by a user for editing. We never transfer any other images from the phone to the cloud. "2. We might store an uploaded photo in the cloud. The main reason for that is performance and traffic: we want to make sure that the user doesn't upload the photo repeatedly for every edit operation. Most images are deleted from our servers within 48 hours from the upload date. "3. We accept requests from users for removing all their data from our servers. Our support team is currently overloaded, but these requests have our priority. For the fastest processing, we recommend sending the requests from the FaceApp mobile app using "Settings->Support->Report a bug" with the word "privacy" in the subject line. We are working on the better UI for that. "5. We don't sell or share any user data with any third parties. "6. Even though the core R&D team is located in Russia, the user data is not transferred to Russia. "Additionally, we'd like to comment on one of the most common concerns: all pictures from the gallery are uploaded to our servers after a user grants access to the photos [...] We don't do that. We upload only a photo selected for editing. You can quickly check this with any of network sniffing tools available on the internet."

So what does this all mean?

Well, essentially, the privacy policy is still pretty shifty. But at least users now know how to keep their information safe - even if the process is long and arduous.

And many aren't convinced by Faceapp's statement.

The fact that they make it so hard to keep your data (and your face) safe has led many to believe that the app doesn't have particularly good intentions. So use it at your own peril! But, while you decide, take a look at some of the best of Faceapp, curated for your scrolling pleasure.