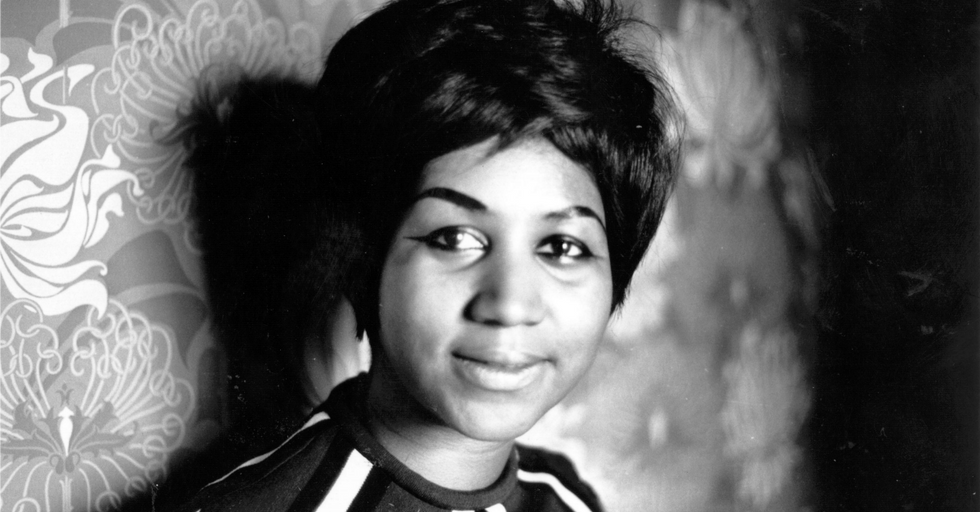 35 Facts About the Incredible Aretha Franklin

Legendary singer Aretha Franklin passed away on August 16, 2018. Her impressive vocal range, powerful voice, and enduring career made her undeniably one of the most successful musicians in history.

Aretha Franklin was admired and beloved by pretty much everyone. Who among us wouldn't sing along if they heard those famous letters: R-E-S-P-E-C-T?

With much respect to the Queen of Soul, here are 35 facts about her amazing and inspiring life.

Aretha Louise Franklin was born on March 25, 1942, in Memphis, Tennessee.

Before the age of five, she moved to Detroit, MI.

Her parents were Barbara and Clarence LaVaughn 'CL' Franklin.

Her father was a preacher, and her mother was a piano player. They separated when Aretha was a toddler and Aretha moved with her father to Detroit. She had three full siblings.

She died before Aretha turned 10. Aretha was mainly raised by her father and grandmother.

Aretha taught herself to play piano by ear.

As a child, Aretha learned to play piano by listening to jazz music.

Aretha had her first child at the age of twelve.

Her first child, Clarence was born in 1955, and only two years later Aretha gave birth to her second child, a boy named Edward. Keep reading to learn more about the life of the amazing Aretha Franklin.

Aretha's father, C.L. Franklin, was also a singer and encouraged Aretha to sing at church and with him during speaking and musical engagements.

Her father was the pastor at New Bethel Baptist Church and was well-known for his sermons and as a civil rights activist.

Martin Luther King Jr. visited the Franklin family when Aretha was a child.

Later, Aretha would go on to tour with Dr. King.

She sang at his funeral.

At her father's church, she recorded her first album.

Songs of Faith in was released in 1956 when Aretha was only 14 years old. The album featured religious songs.

Aretha dropped out of high school to pursue her music career.

She left during her sophomore year. More facts about Aretha Franklin on the next page.

For a few years after her first album was released, Aretha traveled with her father on tour. She met famous gospel artists like Sam Cooke and Mahalia Jackson.

Aretha signed with Columbia Records in 1961.

She released her second, but first widely-released, album Aretha.

Two tracks from that album made it to the R&B Top 10.

Aretha was quickly becoming incredibly popular, however, she hadn't yet crossed over into mainstream pop.

Later that year, she released a single called "Rock-a-Bye Your Baby with a Dixie Melody".

That would be the first song to push her into a top 40 spot.

Aretha's voice was like nothing anyone had heard before.

Not quite R&B, not quite pop, not quite gospel, Aretha was an unstoppable mix of the three. Aretha's career was about to take off. Read more on the next page.

She had a vocal range of four octaves.

She could sing from G2 to E6, which is almost unheard of for most singers.

The marriage was a tumultuous one, which only lasted eight years.

After working with Columbia Records for six years, Aretha moved on to Atlantic Records.

She hoped to find more commercial success, and she did.

She gained international fame with her song "I Never Loved a Man (The Way I Love You)," which peaked at number one on the R&B chart and number nine on the Billboard Hot 100.

The song was written by Otis Redding. His version had been released two years earlier. Find out why "Respect" was such a powerful song on the next page.

Coming from a black woman, the song became an anthem for feminism and civil rights.

Aretha also added key elements to the song that made it more popular than Redding's original version.

The spelling of the word respect was added, as well as the phrase "sock it to me," which became a widely-used phrase.

Aretha's sisters are the backup singers in "Respect."

Erma and Carolyn Franklin are featured singing the "sock it to me" line.

The song was a huge hit.

It was number one on the Billboard Hot 100 and topped the charts internationally. Aretha won two Grammys for "Respect" in 1967.

Aretha released two albums in 1968, both were hits.

They contained popular songs  "Chain of Fools," "Ain't No Way," "Think," and "I Say a Little Prayer." More facts on the next page, keep reading about the incredible life of Aretha Franklin.

Aretha appeared on the cover of Time Magazine in 1968.

The cover was captioned, The Sound of Soul.

Aretha continued to have success in the early 1970s, but he success began to waiver later in the decade.

As a result of her failed albums, Aretha switched record companies once again.

In 1979 she left Atlantic Records to sign with Artista Records, where she found more success.

Sadly, Franklin's father was shot in his home in 1979 during an attempted robbery.

He went stayed in a coma for five years before his death in 1984.

Aretha was so afraid of flying, she didn't get on a plane for 30 years.

After a turbulent flight in the early 1980s, Aretha vowed never to get on a plane again and didn't for three decades. She even turned down a performance for the Queen because she didn't want to get on a plane. She famously took a tour bus everywhere she went. To learn more about Aretha, there are more facts on the next page.

Aretha may or may not have been the godmother to the late Whitney Houston.

At Whitney's funeral, Dionne Warwick told the crowd that Aretha, who couldn't make it to the funeral, was Whitney's godmother. Later Aretha made publicly remarked that it wasn't true.

She returned to the top 40 charts and her album A Rose is Still a Rose, produced by Lauryn Hill, went gold.

Aretha performed the Star Spangled Banner at the 2006 Super Bowl in Detroit.

She won 18 Grammy Awards, has a star on the Hollywood Walk of Fame, was the first woman into the Rock and Roll Hall of Fame, and received a Presidential Medal of Freedom (just to name a few).

After a long career and a widely celebrated life, she died of pancreatic cancer at age 76. Share this with a fellow Aretha Franklin fan.