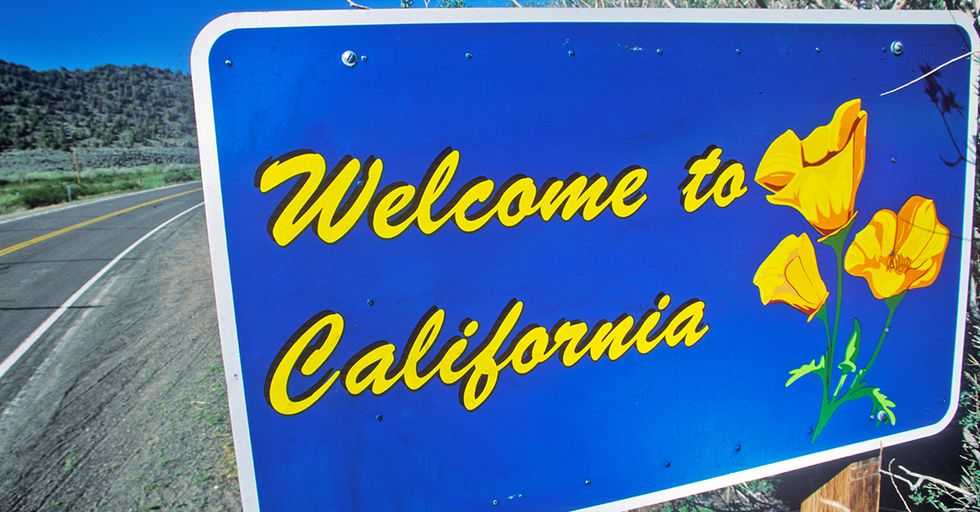 30 Shocking Facts Even Californians Don't Know About the Golden State

No one ever wrote a song titled, "Pennsylvania Dreamin" or titled an album, "Floridafornication" and that's probably no coincidence. California is pretty damn cool, and we'd be remiss if it ever seceded from the nation (yes, the "Calexit" movement is a thing).

Here are 30 obscure facts about California – so when you finally ask her out on a date you don't sound unoriginal.

Born at 11:52 am, 8 lbs. 12 oz., west coast hip-hop was an entirely different entity from its brother on the east coast. Dominated by rappers Tupac Shakur, Snoop Dogg, NWA among others, this style of hip-hop often had a laid-back melody overlaid by hard-hitting lyrics.

Ah, slathering everything in Ranch dressing, the true American pastime. This recipe was developed by Steve and Gayle Henson who owned a (you guessed it) ranch in Santa Barbara, California. Customers who visited this dude ranch loved the stuff so much, the couple began selling it.

Before it was a top-grossing American city, San Francisco was nearly lost. In a devastating series of 7 fires in 2 years, the city incurred millions of dollars in damage and lost several lives.

During the 1940's or 50's, surfers were looking for a way to continue their sport on land. They slapped some roller skate wheels to the bottom of crates and boom, "sidewalk surfing" began.

The San Francisco cable car system is the world's last manually operated one. Not excited? Well, you clearly don't live in SF, then. Those hills used to literally kill people and livestock in inclement weather. Andrew Smith Hallidie is credited with the idea, after witnessing a fatal horse-cart accident on the SF streets in the 1860's.

From tomb art in Ancient Egypt to traditional Native American dance, hula hooping or hooping in some form has arguably existed since the beginning of recorded human history. However, it wasn't until the company WHAM-O bought a particular hoop design and distributed them for free to kids in southern California, that the modern hooping craze was catalyzed.

Home to, "The Most Crooked Street in the World"

I was traveling with my family (big mistake, I know) in the Bay Area when I first saw it – my mom's face light up, that is. She was queuing up our rental car to drive down Lombard Street, the most crooked street in the world (or in all of San Francisco, at least). Lombard street is paved with 8 switchbacks, and my mom was thrilled for every single one. She's not alone either, Lombard street sees approximately 1 million cars a year.

Home to the Hippie Movement

The Haight-Ashbury district in San Francisco has seen its ups and downs. It's widely known as the historical hotbed for the hippie and counterculture movement of the 1960's, but what's more obscure is the "Gray Line" that used to chauffeur tourists around to get a glance of the hippies, live and in action. Bizarre.

Really hot. So hot in fact, that it boasts both the hottest air and ground temperatures on Earth. Contrary to its name, not all is dead there. 1000 species of plants, 300 species of birds, and 51 mammals live in Death Valley. Even humans have occupied Death Valley, including the Timbisha and Shoshone Native American Tribes.

The Ghosts of Golden Gate Bridge

Before it was established as a civic engineering feat, the Golden Gate Bridge, it was a massive employer in the Bay Area. That's right, the bridge was built during the Great Depression, and the crews of men who worked on its construction often braved precipitous danger. Luckily, a wide net was installed under the bridge that caught (most) of those who happened to fall. The men who lived to tell this tale were eventually branded as the "Halfway to Hell Club".

These massive trees are a genus of Redwood and naturally grow in a restricted area of the Western Sierra Nevada. They are majestic, fire-resistant, and can absorb water from the air. Basically, if one was a Pokemon, I'd choose it.

Why would you want to crystallize a virus? To hang on your Christmas tree? Almost. Because by crystallizing a virus, you combine thousands of viruses while maintaining the purity of its structure, allowing scientists to study it.  Dr. Wendell Stanley and his team at U.C. Berkeley were the first to accomplish this.

Eureka stems from the Greek word meaning, "I have found it". It's also the California motto. It's an homage to those who discovered gold in the Sierra Nevada and the Northern California Goldfields – though they likely used French, not Greek, to describe their surprise.

Cali Puts the "Cult" in Culture

California has served as HQ for an inordinate amount of cults. From Heaven's Gate, the Manson Family, to the People's Temple, it's a wonder why so many are located here. Some say it's California's established history of political and spiritual movements, I say it's the weather.

In 1980 a team of Berkeley researchers published the seminal paper on the theory of an asteroid striking the Earth 65 million years ago, catalyzing the widespread death of the dinosaurs.

Born in San Francisco, Rube Goldberg was an accomplished engineer, but that's beside the point. He created these whimsical contraptions, designed to accomplish simple tasks using a dizzying number of chain reactions.

Not the compartment in your fridge. It stands for Clustered Regularly Interspaced Short Palindromic Repeats. Hailing in part from U.C Berkeley, this technology borrows tactics from bacteria's natural defense system, which contain remnants in their DNA code from past invaders, referred to as spacer sequences. Scientists are able to create spacers in RNA, which seek out a match in our DNA and cut out the mutation. this space can then be filled with the correct DNA, thereby solving genetic disease. Wtf, right?

The Gold Rush is a bit of a double entendre. Yes, there was a rush of gold, but there was also a rush of people. This time period characterizes the largest migration in American history.

You probably don't know him, but John Sutter owned land in what is now Sacramento. He discovered gold on his property and was intent on keeping the knowledge a secret. But word got out and his land was plundered, causing Sutter to virtually lose everything in the process.

The Redwood forests are known for its big trees, but it's also home to big slugs, like this banana slug! The towns near Russian River, located about 50 miles north of San Francisco, hold a yearly festival in honor of them complete with slug races and a recipe contest.

Whoops, was That My Fault?

The St. Andreas fault is the largest in America and is located directly along the coast of California. I guess even an awesome state has its cracks.

The Museum of Death

Perhaps given California's dubious association with cults and other tragedies, it's fitting that the Museum of Death in Los Angeles features all sorts of creepy delights like original photos from the Dahlia murder crime scenes.

Who needs white sand beaches when you have... trash? In 1906, the community in Fort Bragg, California established a dump site near the coast. Although efforts since then have largely cleaned the site, the waves have smoothed the glass and ceramic remains, leaving something actually quite beautiful.

How California Dealt with the Prohibition

How'd California deal with the prohibition? Well, if you ask me. Residents built a network of 11 miles of tunnels to service basement speakeasies. King Eddy Saloon, which exists today acted as a front for one of these alcohol running operations and it still contains one of these underground access points in its basement.

Opening in 1896, the Sutro Baths were the largest public indoor swimming establishment. The ocean waves from the San Francisco coast would roll into the baths during high tides and a water pump could fill the pools during low tide. Although the baths aren't operational, you are still able to tour the area and former structure.

San Francisco is One of the Greenest U.S. Cities

At this rate, it feels like San Francisco is the kiss-ass in class that has to outdo everyone like, every school project. But nonetheless, it's succeeding. SF is one of the greenest U.S. cities, using more solar panel energy than the rest of the country combined.

Before it was home to the stars and weird shows like "The Hills", it was a Christian haven. Or that's how Daeida Hartell pictured it when she convinced her husband to purchase 120 acres in Hollywood in 1900. Ironic how her envisioned, "temperate oasis" turned out to, eh?

Only 8 species of millipedes are bioluminescent (the fancy word for glow in the dark). All 8 are found in 3 counties in California. But before you try wearing one at a rave, you should know that they generate this glow to warn predators. These millipedes excrete hydrogen cyanide toxin when attacked.

A Pacific Grove near Monterey California will slap you with up to a $500 fine for (vandalizing property? dumping trash?? grand theft auto??) no, molesting butterflies. Ain't that some hippie-lovin', "Greenest City in the US" type sh*t? But that's why we love you, California. We truly do.