Wicked Facts About Cersei Lannister From GOT | 22 Words 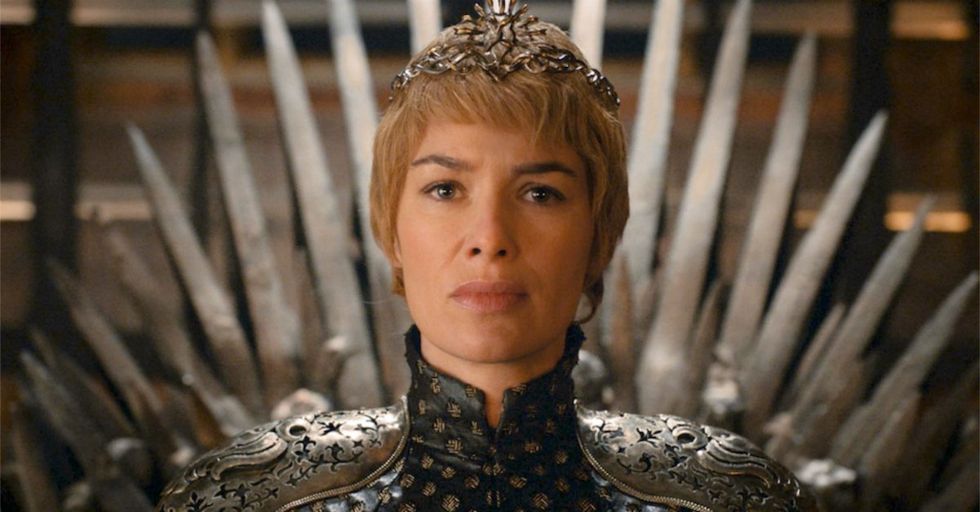 Wicked and Conniving Facts About Cersei Lannister From 'Game of Thrones'

Ah, Cersei Lannister. She's basically the Game of Thrones equivalent of the wicked queen, only instead of bothering with apples, her chosen accessories are wine, blistering comebacks, and a zombified bodyguard that strikes fear in everyone's hearts. Cersei is one of the most fascinating characters on GOT, mainly because she continues to defy stereotypes and to fight against the men trying to pigeonhole her.

Here are the most fascinating facts about Cersei Lannister. Be forewarned, there are spoilers.

When Cersei is a young princess, she meets a witch named Maggy the Frog who gives her a horrifying prophecy.
Maggy tells Cersei:

The king will have 20 children, and you will have three. Gold will be their crowns. Gold, their shrouds.

All of Maggy's words, thus far, have happened. Three of Cersei's children – Joffrey, Myrcella and Tommen  – are dead.
Which is why it's so strange that she's pregnant with a fourth. Could she be subverting the prophesy? Only time, and the eighth season of GOT will tell.

2. One of her brothers will kill her

In George R.R. Martin’s “Song of Ice and Fire" books, another line of Maggy's prophesy says,

And when your tears have drowned you, the valonqar shall wrap his hands about your pale white throat and choke the life from you.

This has a very controversial meaning...
"Valonqar" means little brother, and Cersei has always suspected that this will be Tyrion, which explains her hatred of him. Users on reddit, however, have debated whether it could actually mean Jaime. He is her younger twin, after all...

3. Cersei and Jaime are actually almost identical in the books

Raising the ick factor in their incestuous relationship, Cersei and Jaime are described in the books to be nearly identical in appearance, which they used to to fool their family members and tutors for years.
Even their father, Tywin, was fooled by the twin's act, and they compounded this by mimicking each other's mannerisms, until puberty foiled them both.

4. Cersei was turned down as a bride for two princes

Cersei was originally supposed to marry Rhaegar Targaryen, who was, at that time, heir to the Iron Throne. When Viserys was born, their engagement was supposed to be announced. But the announcement never came...
Why? Rhaegar did not want to marry Cersei. After that, Tywin hoped Cersei would be married to Viserys, even though he was years younger than her, but that didn't pan out either.

5. Cersei's husband was in love with another woman

Robert Baratheon wanted Lyanna Stark, the woman Rhaegar Targeryen ended up secretly marrying. He even won a war to get her back, although she died in childbirth to Jon Snow.
On Robert and Cersei's wedding night, Robert called her Lyanna, and that was when she knew he would never love her. The only woman he wanted was already dead.

6. Cersei and Jaime's mom knew all about their incest

One of the biggest things to know about Cersei is that she and her twin Jaime have had a sexual relationship since they were teens, one that's resulted in three children – Joffrey, Myrcella and Tommen – and a potential fourth.
Even more horrific, their mother found out when a servant walked in on the teens and told her what they were doing. Furious, their mother put their bedrooms on separate sides of the castle and posted a guard at Cersei's door. That, obviously, didn't stop the incestuous pair.

7. Cersei didn't want to have her husband's kids, so she aborted them

Cersei had three children, and Robert Baratheon had 20 bastards. All of Cersei's kids are blonde, and Robert's bastards are dark-haired.
Cersei made sure to abort at least one of Robert's children – going to a woman to have it "cleansed." Whether this is because she hated Robert or because she didn't want to arouse any suspicious by suddenly having a dark-haired kid is anyone's guess.

8. Cersei's firstborn was actually her husband's

In the books, Cersei had one child before Joffrey, Myrcella and Tommen, a son that was described as "dark-haired" like all of Robert's children.
He died of a fever soon after he was born, however, leaving Cersei bereft. This is one of the many differences between the TV show and the books.

9. Cersei is based on two real life queens

A Song of Ice and Fire, the book that began the entire GOT series, is based on the War of the Roses, which was an actual war in the 1400s between the British House of Lancaster and the House of York. Cersei may be an amalgamation of two queens, Elizabeth Woodville and Margaret of Anjou.
Here's where it gets juicy – Margaret, Henry the VI’s Queen, took control of his throne when he got mentally unstable, and was rumored to have had relationships with other men who fathered her children. Elizabeth Woodville, wife of Edward the IV was beautiful but despised for being a scheming and evil woman. Sound familiar?

Her Significance In The Novels

While we all know Cersei as an important character in the show, her showing as a significant POV character in the novels happens with A Feast for Crows (2005) and A Dance with Dragons (2011).

Speaking of the novels, Cersei is slated to return again in the next novel, The Winds of Winter. We can't wait to see what kind of trouble she'll cook up as game of thrones plays on.

She Was Almost Married To A Targaryen

Her father tried to marry her off to Prince Rhaegar. Lucky for her, this marriage fell through and never happened. Maybe it was fate, maybe Cersei's extreme disapproval of the union somehow led to it's failure. Regardless, we're  sure it's for the best.

Much of Cersei's story and personality are actually exactly the same between the two mediums. We can't say the same for most other characters who make the jump from book to television or film.

Everyone knows that Cersei is self-serving. It's a part of why some people love her. Though even Jon has his limits. After agreeing to aid Jon and the others in battle, she reveals to Jamie that she actually intended for the two forces to wipe out each other so that she could attack the victor of that bout. Needless to say, Jon was ready to dip.