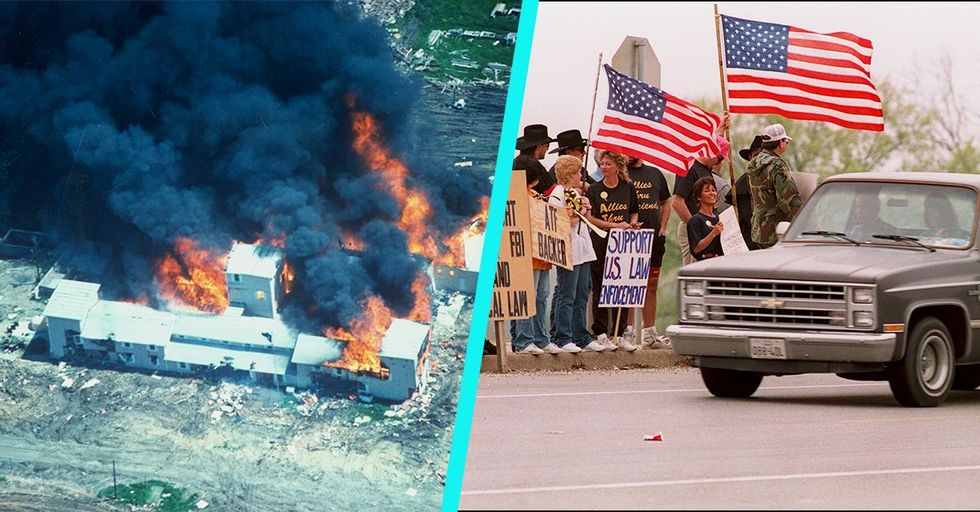 Since the Paramount Network launched its gritty 6-part miniseries, Waco, new information about the 51-day FBI siege on the Branch Davidians’ compound at Mount Carmel has come to light.

Here are 20 facts about David Koresh, the Branch Davidians, and the tragedy at Waco that may shock you.

David Koresh was born Vernon Howell to a teenage mother in Texas, who abandoned him for a time before returning to raise him. Vernon never knew his biological father, but his stepfather was alleged to be abusive. Vernon changed his name to David (as in King David from the Bible) Koresh (another Biblical king) after claiming to have an enlightened experience on a trip to Israel in 1990.

Vernon Howell had a severe learning disability and played guitar.

In his younger years, Vernon was teased by classmates when he was placed in Special Education classes due to his challenges in reading. In his adult years, Vernon (then David) would go on to memorize the entire Christian Bible – a feat many of his followers marveled at. Vernon also fancied himself a rockstar, playing guitar and acting as lead singer in a band at local bar gigs.

The Branch Davidians were an offshoot of the larger Seventh Day Adventist sect of Christianity. David joined the Davidians at Mount Carmel Center under the leadership of George Roden, whose power he would later usurp.

The FBI and popular culture have painted a picture of David Koresh seeing himself as a Jesus figure, or a cult leader with a “Messianic Complex." But Koresh actually renounced such direct claims, saying instead that he was a chosen “Lamb of God" and that God spoke directly to him.

The allegations of child abuse at Mt. Carmel were never proven true.

Although Koresh was guilty of taking multiple “spiritual wives," some of whom were shockingly young (14 years old), accusations that child-beatings and ritual abuse of children in general were never proven by the government. A 6-month investigation by the Texas Child Protection Services in 1992 failed to collect any evidence.

Some parents legally signed their young daughters over to Koresh for “spiritual marriage."

In Texas, girls as young as 14-years old could legally marry with the consent of a parent or guardian. Even though Koresh wasn’t legally marrying multiple wives, he still sought out parental approval when taking an underage girl into his harem. Most disturbingly of all, many parents consented to the arrangement.

Koresh also orchestrated sham weddings between the men and women to cover up his polygamous ways.

Because he wasn’t legally married to more than one wife, Koresh’s sexual activity with minors could be prosecuted. Thus, he arranged a union between his youngest wife and another member of the Davidians in order to cover his tracks. Although he didn’t allow the married couple to consummate their marriage, he did require the husband to claim Koresh’s children as his own for legal purposes.

Koresh declared himself husband to ALL of the women at Mt. Carmel – even if they were already married.

In a “prophecy," Koresh told his followers that all of the men were to remain celibate for the rest of their lives, and that he would take on “the burden of sex" for the entire group – even the married couples. Although Koresh lost a handful of followers after declaring this insane rule, many stayed with him and submitted.

Koresh was trying to produce children who would witness the “End Times."

As part of his desire to claim all of the women for himself, Koresh made it his mission to produce 20+ heirs who he though would be the next generation of prophets – prophets who, he said, would usher in the “End Times" as described in the Book of Revelation.

The Branch Davidians were waiting for the world to end.

Because they were an Apocalyptic cult, the Davidians expected the world to end in a hail “of fire and brimstone," as Koresh preached through his interpretation of the Book of Revelation. He claimed to be the only prophet on earth who could unlock the meaning of “the seven seals" – a description in Revelations about exactly how God would bring the world to an end.

When the Bureau of Alcohol, Tobacco, and Firearms stormed Mt. Carmel in 1993 to bring the Davidians up on charges of stockpiling illegal automatic weapons, a shoot out ensued that caused casualties on both sides. The 51-day standoff that ensued between the FBI and the Davidians afterward would be justified, in part, by Koresh’s belief that the Apocalypse was finally upon them.

Koresh originally promised to come out of the compound, then reneged.

Koresh demanded that a a recorded sermon be distributed via video to all news outlets, which the FBI agreed to. In exchange, he promised to come out with all of his followers peacefully. After the video aired on national television and Koresh saw that the reaction wasn’t positive, he then refused to budge.

According to historians of the siege, the FBI bugged milk crates going into the compound to listen to Koresh’s conversations with his followers. They also resorted to pressurized tactis designed to make the Davidians uncomfortable “including turning off the compound’s electricity, playing Tibetan chants over loudspeakers, and shining spotlights on the complex to disrupt sleep." None of it worked.

Although Koresh was among the first injured in the shoot out (six Davidians were killed the first day), he refused medical attention for his wounds and somehow stayed alive for nearly another month and a half negotiating with the FBI about the terms of surrender. He was eventually shot in the head during the final siege of the compound on day 51.

The fire that consumed Koresh and his followers at the end of the siege is still a mystery.

Although strong arguments on both sides point the finger at either the FBI or the Davidians starting the fire, some also claim that it was a “freak accident" caused in part by the tear gas Federal Agents pumped into the compound to force everyone out. Whatever the cause, the fire was disastrous – killing all but nine Davidians. Fifty adults and 25 children died in the blaze.

But the fire didn’t kill all of them – gunshots did.

When the FBI investigated the 75 bodies found in the rubble, some appeared to have been shot before being burned. Some wounds were reported as “self inflicted."

A 1999 hearing found the FBI innocent of starting the fire.

Although it’s still widely debated, in 1999 US Attorney John Danforth ruled that the US government did not start the fire nor did it shoot at the compound on the final day of the siege. But US Supreme Court Judge Janet Reno, who initially authorized the raid, expressed deep regret later at giving the FBI authorization to attack with tanks and tear gas.

A former Branch Davidian and one of the nine survivors of the Waco siege, David Thibodeau published a book entitled Waco: A Survivor’s Story. In it, he details daily life under Koresh’s rule as well as the final days of the siege.

The miniseries is also based on FBI Negotiator Gary Noesner’s account of the standoff.

In his book Stalling For Time: My Life as an FBI Hostage Negotiator, Gary Noesner details the conversations he had with Koresh – and with Koresh’s right hand man, Steve Schneider. He also describes the battle within the FBI over whether peaceful negotiations could be reached before resorting to aggressive military tactics.

Taylor Kitsch was initially freaked out to play David Koresh in "Waco."

Kitsch told the Daily Beast, “It’s the most scared I’ve ever been…I haven’t played somebody remotely close to who this guy is before, or someone so unrelatable for me." Kitsch spent nine months seriously preparing for his role, meeting with the nine real-life Waco survivors, listening to Koresh’s recorded sermons, and to the hours of phone conversations between Koresh and the FBI from those final days. Kitsch also dropped forty pounds for the role – and donned aviators and a mullet – rendering  him nearly unrecognizable when compared with the role of Tim Riggins that made him famous on Friday Night Lights.