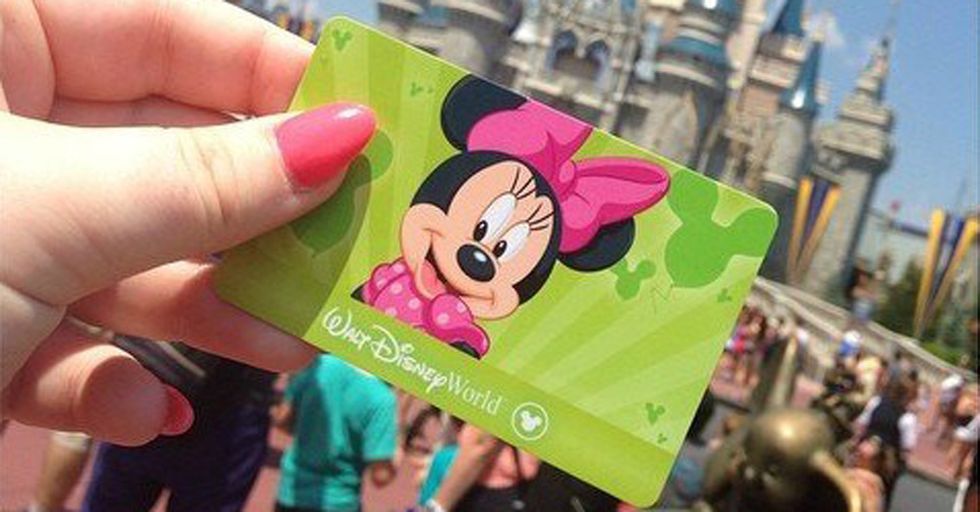 39 Fun Facts About Disney World You Never Knew Before

Not only is Disney World one of the happiest places on Earth, but it also turns out that it's one of the most interesting.

You might think you know everything about the park in Orlando, Florida, but do you know how much the first ticket cost? How much Coca-Cola is consumed there each year?

You will after you read this post, so let's enter the magical gates...

There are about 74,000 cast members in Central Florida.

And for the record, people who work for Disney World are not called employees; they are called cast members and must always be in character when on duty.

An average of 210 pairs of sunglasses are turned in to Disney's lost and found every day.

That means that since 1971, an estimated 1.65 million pairs of glasses have found their way into the "lost" bin. Aside from just glasses, Lost and Found cast members collect more than 6,000 cell phones, 3,500 digital cameras, 18,000 hats, and 7,500 autograph books annually.

Mickey and Minnie have hundreds of unique outfits.

You might think you know what they're going to wear, but Mickey Mouse has over 135 sets of different outfits, and Minnie has more than 100.

There is symbolism in the Cinderella mosaic.

Candy? Sure. Overpriced beverages and ice cream? Pretty much everywhere you look. But they don't want you heathens sticking your gum in unfortunate places.

Disney World's largest theme park? That would be Animal Kingdom.

It covers 580 acres and is dedicated and themed entirely around the natural environment and animal conservation, a philosophy once pioneered by Walt Disney himself.

The headhunter at the end of the Jungle Cruise has a name — Trader Sam.

Not to be confused with Trader Joe, who wears a Hawaiian shirt and tries to sell you cookie butter.

Newlyweds can see the Cinderella Castle from the altar of Disney World's wedding pavilion.

That's truly one way to start a "happily ever after."

Why the creepy tombstone?

When Mr. Toad's Wild Ride closed, it was placed in the Haunted Mansion to honor it.

You can't bring balloons, straws, or drink lids in to the Animal Kingdom Park.

It's not that they don't trust you, but...well, it kind of is. They do it for the safety of the animals.

Speaking of animals, the camel outside the Magic Carpets of Aladdin ride actually spits on you.

It's thought that a cast member operates the camel and decides which guests to spray with water. How cool would that job be?

Cast members do an average of 285,000 pounds of laundry per day.

That means if you washed and dried one load of laundry every day for 52 years, you'd clean as much as cast members at Disney World do in a single day. In addition to the 285,000 pounds they wash, 30,000 to 32,000 garments are dry-cleaned daily.

People can actually stay in a guest room suite in Cinderella's Castle.

Walt Disney originally built the little apartment for himself, but died before it was finished. The suite sleeps up to six people, but you can't make reservations. The only way you can get in is by winning a sweepstakes Disney prize drawing.

Speaking of Epcot, the name is an acronym for Experimental Prototype Community of Tomorrow.

Walt Disney came up with the word because he wanted Epcot Center to be a futuristic functional community where people actually lived.

There are 4,000 acres of gardens and maintained park landscapes.

To put that in perspective, that's about 3,000 football fields.

The fountain at Epcot Innoventions Plaza can shoot water 150 feet in the air.

If all of the "shooters" were set off at the same time, there would be 2,000 gallons of water in the air.

Disney World is MUCH bigger than you probably think.

It spans about 40 square miles. For a comparison, that makes it the size of San Francisco or two Manhattan islands. According to Disney, of the approximately 25,000 acres, about a third is conservation land.

There are hidden Mickeys all over the parks.

If you want to have some fun next time you go, check back with some sites dedicated to logging all of the ones people have found.

The happiest place on earth is also a campground.

Disney's Fort Wilderness Resort and Campground offers 409 cabins and 799 campsites for people to stay at.

Most cast members at Walt Disney World can tell you where the bathroom is in 14 languages.

But that’s it. Anything past that is going to require a translation app and excessive hand motions.

What was the first movie ever filmed at Disney World?

Despite how it looks, Cinderella's Castle is not built from stones.

The entire building is built out of fiberglass, concrete, steel, cement, and plaster, with no bricks or stones used at all.

The Liberty Oak in Liberty Square is the parent to over 500 other trees.

The trees all started out as acorns that were harvested from the tree.

And Stormalong Bay? That's the largest pool in the world with a sand bottom.

Over 75 million Coca-Colas are consumed each year at the Disney World resort.

If you're not much of a pop drinker, you're probably someone that drank one of the 13 million bottles of water.

As of Summer 2014, the Magic Kingdom is the world's most popular theme park.

It's held the No. 1 spot for a few years now, followed closely by Tokyo Disneyland and Disneyland.

It's also the merriest place on Earth.

The Tree of Life is almost bigger than life.

There is a secret tunnel system that runs under the Magic Kingdom.

The tunnels are not underground, however, but ground level — and beneath the Magic Kingdom. Nicknamed "utilidors," the passages are designed so that cast members and service workers can travel from place to place unseen by parkgoers so that the "magic" of the place is not disrupted.

The water tower at Hollywood Studios has a name...

Are you ready? It's cleverly called Earffel Tower.

Walt Disney World is over the hill.

The Jungle Cruise has actually developed its own self-sufficient ecosystem.

Plants in the ride are now native to the jungle and can survive on their own.

The parks use "smellitzers" to make the smells of different areas match the theme.

Main Street USA typically smells like cookies and vanilla, but around Christmastime, the strategically placed vents release the smell of peppermint. And Pooh's Adventure? Naturally that smells like honey.

Wrong. That would be 16 million pounds.

The Be Our Guest restaurant serves "the grey stuff" from the song.

In the song Be Our Guest, the memorable lyrics say "try the grey stuff, it's delicious!," and you can actually order the dessert off the restaurant's menu.

There is a wedding ring embedded into the concrete of the Haunted Mansion.

Legend has is that it belonged to the hanging bride you see on the ride, so that's a cheery thought.

My, how times have changed, as the park is now the most expensive in the world. But given the magic it holds, the experience is pretty much priceless.