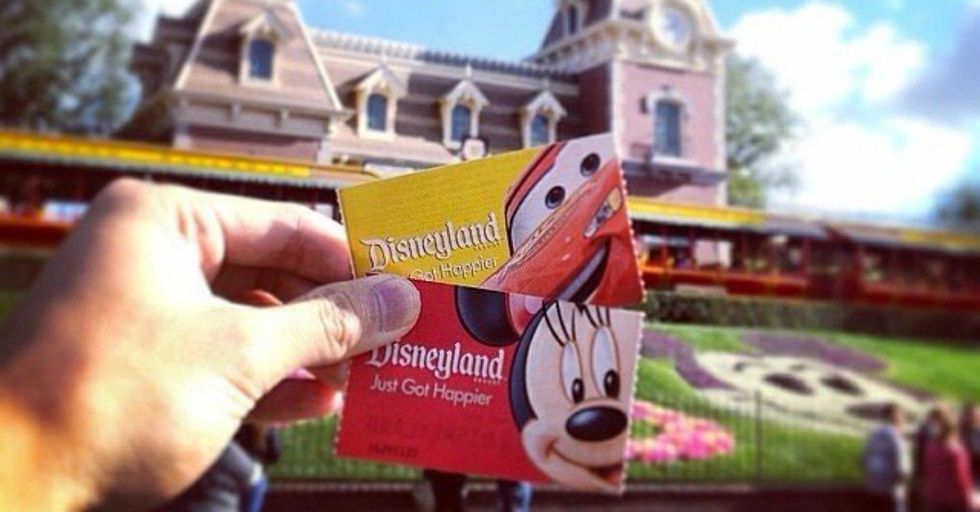 Sure, you've walked around Disneyland and thought you were the ultimate fan, secure in your knowledge of everything Disneyland has to offer.

In honor of the park's 60th anniversary this past summer, check out all the fascinating things about the happiest place on earth that you probably don't know.

There is a fake pet cemetery hidden behind the Haunted Mansion.

Disneyland only had 18 attractions on opening day, and fourteen are still running today.

Mickey Mouse ear hats are the most popular Disneyland Resort souvenirs of all time.

A Spot of Tea

The fastest spinners on the Mad Tea Party ride are the purple teacup and the orange one with diamond shapes on it.

Every year, 2.8 million churros are sold at Disneyland.

All the plants in Tomorrowland are edible.

Go for the Gold

You know the gold trimmings on the outside of the It's a Small World ride? They're made of real 22 karat gold.

There is a basketball court at the top of the Matterhorn.

Meet Harold, the abominable snowman in the Matterhorn.

Build It and They Will Come

How long do you think it took? Surprisingly, it only took one year to build Disneyland.

Michelle Pfeiffer worked at Disneyland as Alice from Alice in Wonderland in the 1970s.

When it opened in 1959, the Disneyland Monorail was the first daily operating monorail in the Western Hemisphere.

The water features in Disneyland are green or brown to hide the vehicle tracks and filtration systems.

How many ghosts are in The Haunted Mansion? That would be 999 ghosts.

Employees weren't allowed to grow mustaches until 2000 because Walt Disney wanted his employees to be clean shaven.

Pirates of the Caribbean originally wasn't supposed to be a ride — it was first planned to be a walk-through attraction.

No Bones About It

Real human skeletons were used as props when Pirates of the Caribbean first opened, but today there is only one human skull left in the ride — the one attached to the headboard.

There are about 200 feral cats live in Disneyland to keep rodents away, but most are nocturnal and not seen during the day.

There have only ever been three unscheduled days the park had to close — the national day of mourning after John F. Kennedy was killed, after the Northridge earthquake in 1994, and on 9/11.

Steve Martin worked at Disneyland in the '50s selling guidebooks and working in the magic shop.

The only location in Disneyland where you can buy alcohol is Club 33, and you can score a drink in California Adventure too.

Make It a Double

You can score a drink in California Adventure too.

You're a Mean One

If the ghost voice on one of the busts in the Haunted Mansion sounds familiar, that's because it's the same voice that sang You're a Mean One, Mr. Grinch.

In 1995, there was a time capsule buried in Sleeping Beauty's Castle that will be opened on Disneyland's 80th anniversary: July 17, 2035.

The first few years the park was open, it was closed Mondays and Tuesdays on the off-season.

Walt Disney wanted to build a theme park after taking his daughters to a merry-go-round.

Until 1991, there was a tobacco shop on Main Street.

There was a lingerie shop as well, but it only lasted six months and closed in 1956.

The drawbridge on Sleeping Beauty's Castle is real and can be raised or lowered.

In a Galaxy Far, Far Away

Eleven-year-old George Lucas was at the park on opening day.

When you wait in line for Star Tours, an overhead speaker will page Egroeg Sacul, which is George Lucas spelled backward.

The props in Indiana Jones's office when you're waiting in line for the ride are real props from the movie franchise.

There have been three babies born in Disneyland.

When a guest vomits in Disneyland, employees use the term "Code V," which sounds better than "puke alert."

On Disneyland's opening day, the asphalt did not set in time and women's heels kept sinking into the ground.

Owning a Piece of the Magic

For many years, anyone was able to own a piece of Disneyland by buying a brick for $150 that now line the path right outside the ticket entrance.