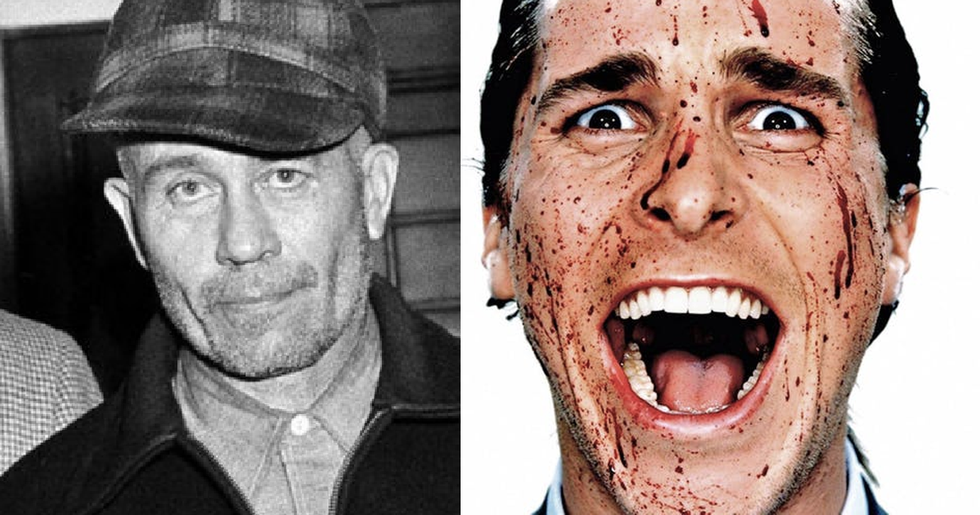 42 Facts About Horror Movies That Will Freak You Out

Who doesn’t love a good fright? The best horror movies thrill us, even as they instill terror. Whether it’s paranormal, psychological, or just plain bloody, our favorite horror films have a crazy story (or ten!) behind them.

Take a look at these 42 chilling facts about horror movies!

Freddy Krueger’s glove from Nightmare on Elm Street is hanging above the tool shed door. See if you can spot it next time you’re watching Evil Dead II!

Watch out for the bees!

While filming Candyman, Tony Todd (who played the Candyman) put real bees into his mouth for the movie’s climactic scene.

The Exorcist has a special place in the horror movie genre.

It’s the first horror movie to be nominated for Best Picture at the Oscars. In 1974, The Exorcist received 10 Oscar nominations in total.

Psycho has a pretty weird ‘first.’

Psycho is the first American film to show a toilet on-screen. Go figure!

Ed Gein lived out his life in a mental hospital after his crimes (and their horrifying remnants) were discovered. Gein admitted to murdering two women and stealing bodies from graves. His house contained body parts and ‘clothing’ made out of his victims, among other things. If that sounds familiar, it’s because Psycho, The Silence of the Lambs, and The Texas Chainsaw Massacre all took inspiration from Gein when making the movie. Did you know that a horror movie is the most profitable film ever? Or which real-life events led to the making of some truly terrifying supernatural horror films? Find out about them on the next page!

Ed and Lorraine Warren actually investigated the paranormal, and The Conjuring is an adaptation of the Warrens’ experiences with the Perron family and their supposedly haunted farmhouse. Lorraine Warren even consulted on the film!

The Shining is a stressful film—for both viewers and the people who made it.

Actress Shelley Duvall suffered from so much stress and nervous exhaustion while filming the movie that it actually caused some of her hair to fall out.

Paranormal Activity is the most profitable movie ever made.

Based on return investment, the film was hugely profitable. It cost roughly $450,000 to make and grossed $90 million.

The horror movie was based on an idea for an episode of The X-Files that had been rejected.

Candyman made yet another bid for authenticity.

Actress Virginia Madsen was really hypnotized for some scenes so that her trance could look authentic. Next up, some truly crazy facts about one of horror’s most iconic films: The Blair Witch Project!

The Blair Witch Project’s marketing was almost too successful.

Because the actors were kept away from the press, and due to marketing tactics used for the film (including missing posters with the three main actors on them), people actually thought that actor Heather Donahue was dead. Her mother even received sympathy cards because of it!

While filming The Blair Witch Project’s, the actors had some interesting ways to work.

The movie’s 35-page screenplay consisted mostly of outlines, and actors were asked to improvise and stay in character. As such, they used the code word ‘taco’ when they needed to break character.

The actors in The Blair Witch Project’s were really put through the wringer.

Each actor would get their daily instructions via wait point, as directed by GPS tracker. They had to locate their respective canister, read notes on where their character’s story was going, and jump into filming. Each set of notes was not to be revealed to the other actors.

And filmmakers were really into realism.

That bundle of sticks that Heather finds, with the teeth and hair? They’re both real. The hair came from co-star Joshua Leonard, and the teeth were courtesy of co-director Eduardo Sánchez’s dentist.

All in all, The Blair Witch Project’s was filmed pretty fast for something so iconic.

The movie took eight days in total to film. It was a fruitful eight days, too. In post-production, nearly 20 hours of footage was whittled down to 90 minutes. Keep reading for one horror movie prop that was a little too real, and one method of making a scary ghost-walk!

Wes Craven kept the memory of Freddy Krueger alive in his over projects.

In Scream, Craven himself plays the high school janitor named Fred, who wears a green and red sweater as an homage to Nightmare on Elm Street. Craven also directed that movie!

The shark in Jaws might be a bit shy.

Despite being THE source of terror and main plot point of the film, we don’t even see the shark until one hour and twenty-one minutes into Jaws. Now that’s building suspense!

Carrie’s leading actress was committed to the role.

Sissy Spacek, who played Carrie, slept in the same bloody clothes for three days to maintain continuity while the prom scene was being filmed.

Ever wonder why Samara from The Ring walks so eerily?

Samara was filmed walking backwards, and then the shot was reversed, to give her that terrifying gait we see in the movie.

The skeletons in Poltergeist aren’t props.

At the time, it was cheaper to use real human skeletons than props. Thus, the skeletons you’ll see in Poltergeist are genuine human remains. On the next page, one movie that abruptly changed genres, and another with the creepiest of on-set scares!

Aliens took a long time to be made.

Despite talks of a sequel immediately following the success of Alien, disputes over money between the producers and 20th Century Fox caused a 7-year delay between Aliens and its predecessor.

Scream wasn’t always the name attached to that particular film.

In addition, Scream Scream was loosely based on real events.

A series of disturbing murders in Florida committed by the Gainesville Ripper involved students being killed. Scream’s screenwriter wrote the movie’s opening scene after watching a news report.

From horror to family science-fiction film, E.T. the Extra-Terrestrial has had quite the journey.

Yep, E.T. was originally meant to be a horror movie. Now it’s a timeless story of friendship. That’s a dramatic difference!

The cast and crew of The Amityville Horror had a real-life scare.

During filming, the cast and crew were notified by police that a dead body had been found floating in the water nearby. One horror movie monster had the strangest inspiration for its look. Find out what on the next page!

Friday the 13th’s Jason Voorhees was originally called Josh. Apparently, Jason is a more intimidating name, because it was later changed.

This is one strange inspiration for a monster.

The monster in The Creature From the Black Lagoon was in fact modeled after an Oscar award statuette.

Warner Brothers got sued after The Exorcist was released.

A man sued Warner Brothers for injuries he got after fainting in a screening of The Exorcist. Warner Brothers settled out of court, so that man probably got a pretty penny for his trouble!

The Silence of the Lambs might have seen a different Hannibal Lecter.

Unsurprisingly, after The Shining, Jack Nicholson was considered for the role of Hannibal Lecter in Silence of the Lambs. However, the role ultimately went to Anthony Hopkins—who was terrifyingly good as Lecter, so all’s well that ends well.

And it was really his! The only thing production did was dye it red and give it that ‘clown’ style. The hair itself is Curry’s actual hair. The costume from one horror movie had humble beginnings. Read up on it on the next page!

The iconic bloody scene in The Shining took a year to perfect.

Remember all that blood pouring out of the elevator? That particular effect took a year to figure out, but only three days to film once they knew how to create it.

Final Destination 3 was a real rollercoaster of an experience.

The actors had to ride a roller coaster 26 times while filming the premonition scene in Final Destination 3. We really hope they were all coaster fans!

If you’re a Nosferatu fan, see if you notice this: Count Orlock (played by Max Schrek) only blinks once in the hour-and-a-half long film.

What a creative Halloween costume!

In Halloween, that mask worn by Michael Myers’ character is, in fact, an altered Captain Kirk mask. As in, that benevolent space explorer from Star Trek. There’s nothing benevolent about the mask, though, especially after it was stretched out and turned stark white!

Originally, Wes Craven offered the role to British actor David Warner. When Warner passed on the project, Robert Englund got the job. Read on for a high-profile shout-out on one horror movie, and a piece of obscure trivia another famous film never showed you!

The Babadook got a pretty huge endorsement:

The Exorcist's director tweeted: I've never seen a more terrifying film than The Babadook. It will scare the hell out of you as it did me. Understandably, the film received an attention boost after that!

The demon in The Exorcist has a name.

The film never says it, but the demon’s name is Pazuzu, which is a demonic name in Assyrian and Babylonian mythology.

Psycho was spoiled months before its release.

Alfred Hitchcock did his utmost to keep the film’s plot under wraps, but both Variety and The Hollywood Reporter published spoilers of Psycho’s ending before the film came out!

One actor from The Shining was given some false information.

Because he was so young at the time, Danny Lloyd (who played the character Danny) was told he was filming a drama rather than horror.

The Silence of the Lambs had an unexpected musical scene.

Buffalo Bill’s dance wasn’t in the screenplay. It was in the original book, and the actor who played Bill (Ted Levine) insisted on including the scene in the movie. Finally, on the next page, check out one movie with some chilling alternate endings, and another with a plot twist that happened five weeks before filming!

Drew Barrymore was originally going to play a bigger role in Scream.

She was supposed to play the lead character (Sidney Prescott) but changed her mind five weeks before production started. The thought behind it was actually pretty clever. She suggested that audiences would be expecting an actress of her notoriety to survive the film, and thus took on the role of a teenager who is killed right in the opening scene to shock people.

Get Out had several alternate endings.

And they were all pretty dark. Jordan Peele revealed one of them: in a different ending, Chris (the main character) was taken by police and jailed for killing a white family. Like this story? Share it with your fellow horror film buffs!