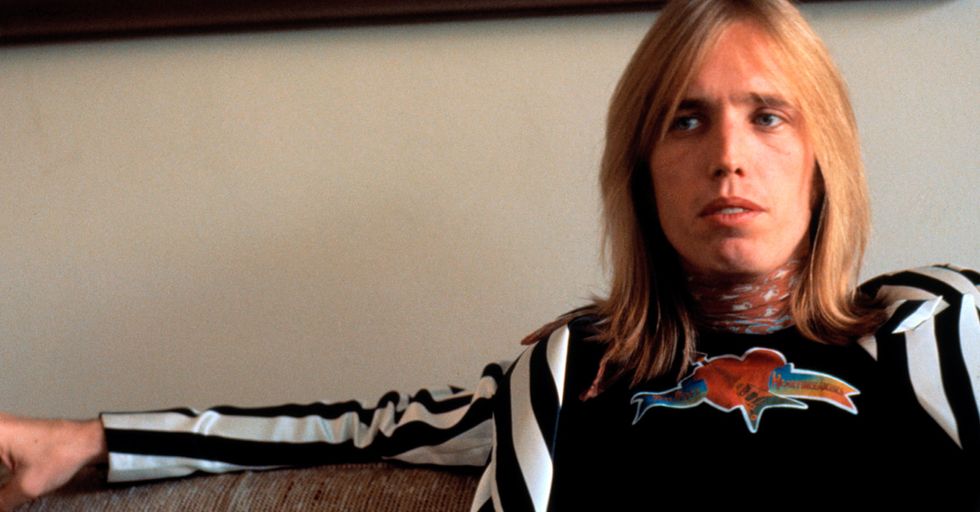 What do you remember about Tom Petty? We knew him best as the legendary frontman of Tom Petty and the Heartbreakers, but he was much more! Inspired by other artists before making it big himself, Tom Petty's life was anything but dull. Petty co-founded more than one band, while also being a producer and songwriter. Plus, he could play multiple instruments! Now, that's a triple threat if I've ever heard of one!

From Petty's career highs and lows to the star's personal life, we've gathered everything you could want to know. As we draw closer to both his birthday and the anniversary of his passing, check out these 30 facts about the legendary musician, Tom Petty!

Petty was a drop-out.

He dropped out of high school at the age of 17, in order to concentrate on his band, Mudcrutch. Petty was their bass player.

The band's name had changed once before.

Before they were "Mudcrutch," the band called themselves "Epics."

Petty was enamored with Elvis Presley and his music, and it just so happens that the first celebrity Tom Petty had ever encountered was Elvis, himself!

He knew what he wanted to be.

Petty realized that he wanted to be in a band after watching The Beatles play on The Ed Sullivan Show.

Though he never attended as a student, Tom Petty worked on the grounds crew for the University of Florida.

He planted a tree on the grounds.

When asked later in his life, Petty recalled having no memory of planting one, but apparently, he did indeed plant an Ogeechee lime tree in his time at the university. The tree has been officially dubbed the “Tom Petty tree."

But that’s not the weirdest job he had.

Tom Petty has also worked as a gravedigger. Go figure!

He learned guitar from a pro.

Specifically, Petty took guitar lessons from a member of The Eagles, Don Felder.

Disparaging Petty’s interest in the performing arts, Petty’s father subjected him to years of verbal and physical abuse.

Petty’s next band made it big.

After Mudcrutch, came the Heartbreakers, and along with them, Tom Petty became fame across the globe.

Tom Petty was a proponent of marijuana legalization. His song “Don’t Pull Me Over" is a protest in favor of legalized pot.

He had a few different stage names.

Petty had been known to perform under the names Muddy Wilbury, and Charlie T. Wilbury, Jr.

Petty also made some appearances on the big screen.

His first film appearance was a cameo in the 1978 movie FM.

He had another film appearance in 1997.

Tom Petty appeared in The Postman as the Bridge City mayor. The film starred Kevin Costner, who also directed the flick.

Of course, he won many awards.

In 1996, Petty was awarded UCLA’s George Gershwin and Ira Gershwin Award for his Lifetime Musical Achievement.

And he was awarded another trophy in May 1996.

After his previous triumph, Petty won the Golden Note Award from the American Society of Composers, Authors, and Publishers.

A few years later, Tom Petty was given a Hollywood status symbol.

Tom Petty and the Heartbreakers were awarded a star on the Hollywood Walk of Fame in 1999, for the band’s impact on music and the recording industry.

He had financial troubles.

Tom Petty went bankrupt in May 1979 and subsequently signed to the MCA subsidiary Backstreet Records.

His first marriage was to Jane Benyo in 1974. The pair divorced in 1996, but not before having two daughters together—Adria and AnnaKim.

Petty was involved in a couple of lawsuits.

In 1987, Petty sued the B.F. Goodrich tire company for $1 million. A song used in one of the company’s TV commercials sounded similar to his song “Mary’s New Car."

The “Stay With Me" singer was required to pay Petty a 12.5% writing credit for his song, which copied Petty’s “I Won’t Back Down."

Petty was the target of arson.

An arsonist burned down Petty’s home on May 17, 1987. In the blaze, Petty’s iconic grey top hat was destroyed.

He’s been involved with comedy.

Petty made a vocal appearance on The Simpsons episode, “How I Spent My Strummer Vacation." Mick Jagger, Keith Richards, Lenny Kravitz, Elvis Costello, and Brian Setzer also played themselves on that episode.

He drew some inspiration from Clint Eastwood.

Petty’s music video for “You Got Lucky" was inspired by Clint Eastwood’s movies.

Besides making music and touring, Tom Petty’s radio station debuted on SiriusXM in 2015.

Petty passed away too soon.

Tom Petty died in California on October 2, 2017, after suffering cardiac arrest. He was aged 66. Share this story with any and all die-hard Tom Petty fans!