30 Things The Movie Didn't Get Right About 'Anastasia' | 22 Words 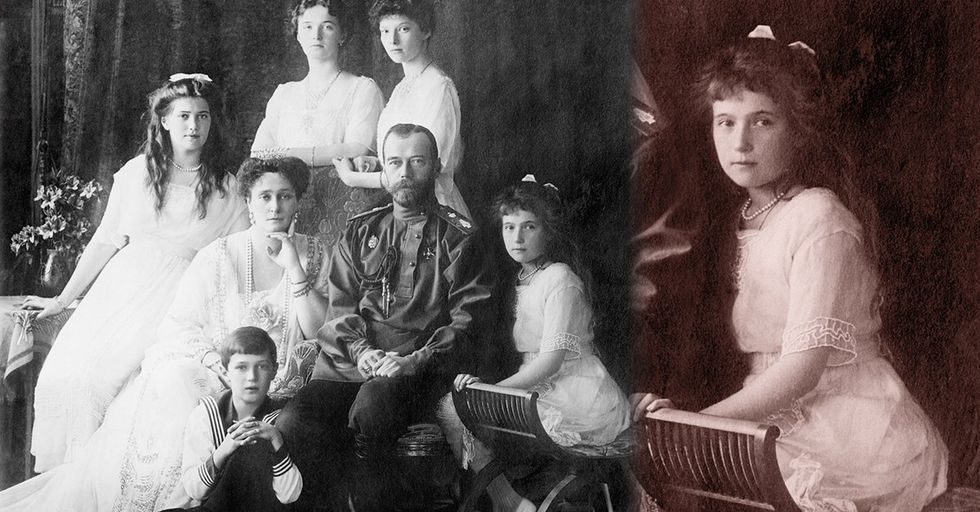 30 Things The Movie Didn't Get Right About 'Anastasia'

Anastasia Romanov is the main character of the iconic film Anastasia. However, the film has a lot of historical inaccuracies. Her execution has been the subject of debate, but all this time later, it's believed that Anastasia was indeed executed with the rest of her family. She is one of the most famous girls in history. Let's dive in to find out more about the real life of the Duchess.

Considering it was never known if she was alive or dead, many women have said that they were actually the youngest daughter of the Romanov family. While some of these women resembled her, through DNA testing, they have all been proven to be liars.

It is well known that Anastasia was in fact, the last Romanov to be left alive before she was executed. That is largely the reason as to why so many claimed to be her imposter.

It Was Not All Fun And Games

Even though she is enjoying some leisure time in the photo above, the children of Alexandra had to follow a strict lifestyle. They did not have new clothes or soft beds, and they could not even enjoy a hot bath. They were taught to be resilient, and that meant no comfort.

She Had Some Issues

Unfortunately, Anastasia was not immune to health issues. Although bunions are not the worst thing to suffer from, she also had a bad back, and it was said she also had hemophilia.

Throughout WWI, Anastasia, although she was too young to help as a nurse like her sisters, did what she could to help the soldiers and innocents who were wounded. She was a constant visitor and even tried to boost their morale.

Unfortunately, Nicholas and Alexandra were very bad rulers. It was because of this that the children were subjected to the main outcome that their parents were. They did not care about the people, only about their wealth, and because of that, it meant a cruel fate for them.

Mirror, Mirror On The Wall, Who Is The Most Clever Of Them All?

Anastasia was known for more than her looks. It is said that she was charming, but more importantly, clever. She was intelligent, which makes sense, seeing as she was brought up by a strict mother who wanted to make sure her daughters were equipped for the world.

Considering Anastasia was known for being a little trickster, it earned her the nickname "imp." Luckily, it was not for a bad reason, it was also because she made people laugh, which is why she constantly visited soldiers during WWI.

The daughters of the Romanov family lived a very private life. They grew up away from the public, for a number of reasons. The politics in Russia were shaky, to say the least, and considering they were girls, they were not seen as important as men were, which meant they were not even that important to the public.

The execution is definitely one of the most violent moments in history, considering how it happened. The family was set up as though they were about to be painted, or photographed before men came into the room to kill them. They were either gunned down or stabbed.

While there are naturally many historicals inaccuracies between the Disney film and what really happened, one big misconception is the role that Rasputin played. In the film, he is a magic sorcerer who is obsessed with the downfall of the family. In real life, Rasputin was a friend to the girls, and they even wore amulets around their neck with his picture inside.

In the movie version, Anastasia's grandmother had already assumed that her family was long gone and did not believe Anastasia when she told her grandmother that it was really her. However, it is said that in real life, Empress Marie truly believed that somehow, her family was still alive, safe, and perhaps even one day they would be reunited.

There's always been some speculation about Anastasia's survival. For a long time, the public wasn't sure what really happened, but after the bones of a young girl were found near her family's remains, it was assumed they belonged to Anastasia.

Anastasia was known for more than just being clever. She was also a trickster. She enjoyed pulling pranks, climbing trees, and all in all basically acting out. She was not a bad child but often was reprimanded for not acting like a Duchess.

Although she was loved, as all her sisters were, Tsar Nicholas was disappointed when Anastasia was born. Having a male heir was of extreme importance at the time, which meant that although Anastasia was a blessing, she was not what he wanted.

Although her name actually means "resurrection", Anastasia was named after the martyr St. Anastasia. She lived during the 4th century, and her title to those who knew of her was "the breaker of chains".

Although the daughters were taught things that would be conceived as specific to their gender, such as sewing and knitting, their mother believed them to be important skills.

No child really likes school, so can we blame Anastasia for acting out? She actually hated it so much that she would climb a tree and just not get down. God knows what they had to do to get her down, but we are sure it was not easy.

When WWI started, many things, even traditions were put on hold. Although the tradition of making each daughter a commander of a Russian regiment was kept alive, there is no photographic evidence to the title that Anastasia received.

Anastasia hated school so much that she began to resort to bribery in order to get her grades up. Doing homework was too tiresome, and since she was clearly not doing it well, she began to bring flowers to her teachers.

Since Anastasia was the fourth born, she was the youngest along with her sister Maria. They shared a room and were very alike in how they dressed, considering they spent a lot of time together. They were called "The Little Pair".

Do Not Forget Us

Anastasia was stressed, naturally, when she had a feeling that her life was soon to come to an end. She wrote letters to her friends and tutors saying goodbye and asking them not to forget who they were.

Amongst the siblings, it is said that Anastasia and Olga were the closest, despite the difference in ages. They had many things in common, including partaking in many physical sports.

The Russian government went on a destruction spree in order to stop the people from praying to the Romanovs. They wanted to destroy everything that had to do with the family, but they knew that if they revealed the bodies only more conversation would be sparked.

Many women tried to claim that they were, in fact, the real Anastasia. It was Anna Anderson who was one of the most well-known imposters. She ended up in a mental hospital, but even those who knew the real Anastasia said that they had many of the same mannerisms.

Fans of the film know the iconic yellow dress that was worn during the dance sequence. That dress, as it turns out, is based on reality. In one of the last pictures ever taken of her before she passed, that was the dress she was wearing.

Taking a leaf out of the books of the imposters of Anastasia, Michael Goleniewski once claimed to be the brother, Alexei Romanov. He insisted that the family survived in Europe, and even though he was proven to be a fake, he never stopped talking about his apparent family.

Although they once had such beautiful long hair as seen in the photo above, once upon a time, the sisters shaved their heads! This happened because in 1917 when the family had to stay in the house under arrest, they had measles and shaved their heads instead of slowly losing their hair.

Once the Soviet Union came to be, the communist party banned any conversation that had to do with the Romanovs. Considering they regarded Nicholas as a higher being, to whom they prayed to, not everyone followed these rules and held onto their faith.

Disney had their chance, and now it is time for Amazon to make their mark. This fall, a new show called The Romanoffs will be aired, but instead of a historical piece, it will focus on a family that says they are the family, including one, of course, claiming to be the youngest daughter, Anastasia.