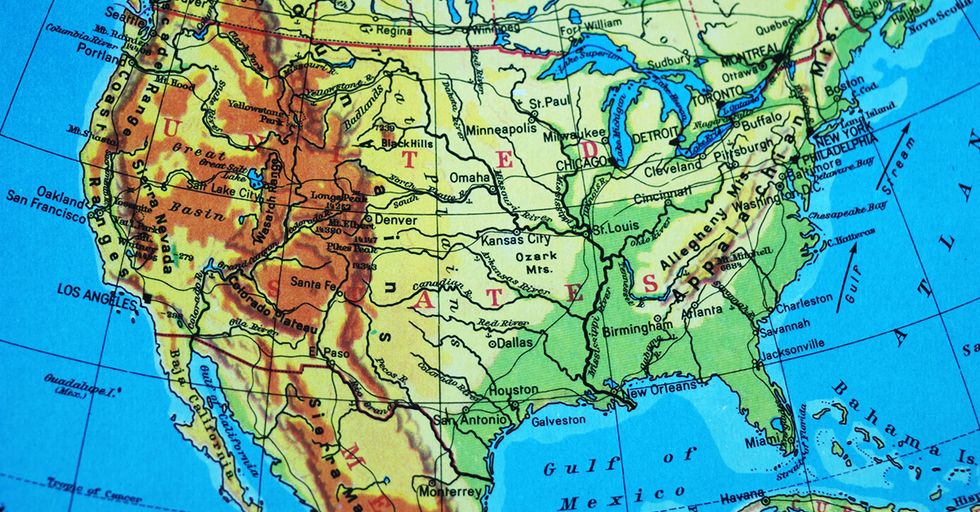 30 Bonkers Facts About The US That You Probably Didn't Know

If you were like me in high school, then you were a total history nerd who paid attention during class. Of course, that doesn't mean I retained much of what my teacher was telling me - high school was a long time ago. But history - and United States history, specifically - is fascinating and at times it can be flat-out insane.

A recent Reddit thread posed the question, "What are some of the most mind-blowing facts about the United States?" Let me tell you. The answers are quite interesting. And most of them I definitely don't remember from high school. If there's one place where history nerds can gather and geek out over bizarre and interesting facts, it's the internet.

Here are 30 facts about the United States that you've probably never heard before. Prepare to have your mind blown.

The Knox Expedition where 60 tons of cannon and artillery were dragged for 300 miles, during three winter months, from Fort Ticonderoga to Boston. This is considered a huge logistical feat and laid the pieces for us to win the Revolutionary War. Every time I don't want to wake up early to vote I think of this. - Justskimthetopoff Talk about motivation.

The US government attempted to use camels for military use, as the United States Camel Corps. It did not work out, partly because they didn't really understand how camels worked or how stubborn they can be. - NebulaMammal Free the camels!

Is this a riddle?

Texas has five of the 15 most populous cities in the US, but the total population of those five cities is less than that of NYC. - Grant_Helmreich Texas forever.

People from Alaska love to walk.

Many of our presidents have been in the military.

I think the coolest thing about the US is that we have practically every climate/biome. -Temperate Forests all over -Subtropical forests in the south -Tropical rainforests and wetlands in Florida and Hawaii -Deserts in the Southwest -Mountains and glaciers in the Rockies -Temperate rainforest in the pacific northwest -Prairie both cold and warm in the midwest -Taiga, and tundra in Alaska -The Mediterranean on the West Coast -Coasts, beaches both warm and cold, lakes, rivers, high mountains, rolling hills, arctic temps, tropical temps - NorthDakotaExists The U.S. has it all.

The states love their songs.

Along with the national anthem, almost all states have state songs as well. Some, such as Massachusetts, have up to 7 official state songs. Some of them are divided into categories, such as state children's song, state ballad, state hymn, state poem, and even state cowboy song. The only state that doesn't have any official state song is New Jersey. - Setaflow What are you doing, New Jersey?!

The cows will take over.

There are 4 times more cows in South Dakota than there are people. - schaumann When the cows decide to revolt against all of humanity, make sure you're not in South Dakota.

The USA won the last ever Olympic gold medal for rugby in 1924 and are therefore technically still reigning champions. - WayfaringStranger30 Long live rugby.

New York City is just a VERY small part of the entire state that is New York. As someone from the way upstate area, it blows people's mind when I tell them that I'm closer to Canada than Manhattan. People who aren't from NY tend to assume that the entire state is just one big urban city. It's far from that. - chef_jojo

Everything really is bigger in Texas.

Texas' Constitution is 9 times longer than the US Constitution. - Succ_My_Meme Texas, you need to chill.

Barbecue in North Carolina is no joke.

North Carolina here! We have two distinct types of barbecue! Lexington, a tomato based, and eastern, a vinegar based. They're both immensely popular and the kicker is: State law says neither one can be named as the official barbecue for the state! An actual law says so. - Shadeslayer738 Never come between a person from North Carolina and their barbecue sauce.

Florida has an old, OLD city.

The U.S. has the oldest mountains.

Pants were so not a thing.

The United States is younger than many pubs in Britain. - jakobako Well, when you put it like that...

Maine has quite the geographical claim.

Maine is the closest state to Africa. - Tactically_Fat Sure, Maine is known for their lobster, but they're also known for being the state closest to Africa.

Morocco knew what was up.

Morocco was the first country to recognize the United States. - indian_inside Thanks for looking out, Morocco.

California is getting crowded.

Will they ever finish I-95?

I-95 has been under construction since 1956. There is a section, supposedly finishing next week, that will complete the project. - SteveDonel The project is supposed to be completed on September 22, 2018. Fingers crossed?

Houston and El Paso are further apart than Paris and Berlin. - AgoraiosBum Should Texas become its own country? At this point, probably. Share this with your friend who loves weird facts!