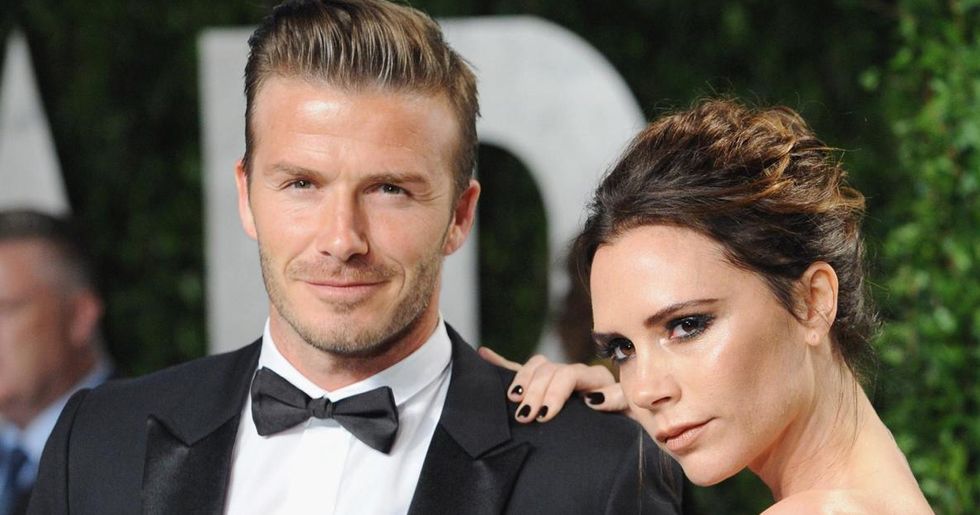 When it comes to celebrity couples, it can sometimes seem as though there's not much hope that they'll last long. If you even glance over the tabloids at your local grocery store, you'll see plenty of splits, divorces, fights, and other unsavory, sad celeb stories.

But some couples have proven they're in it for the long haul.

In 1996, David Beckham found himself transfixed by the Spice Girls' "Say You'll Be There" music video (and honestly, who can blame him?). He turned to his teammate Gary Neville and, pointing to Victoria (AKA Posh Spice), said: "That one there. That's the girl I'm going to marry."

In 1978, Meryl Streep's beloved partner John Cazale passed away from terminal bone cancer. She was devastated and couldn't stand the thought of moving back into the apartment the two of them had shared. Her brother's friend — Don Gummer — stepped in and said Meryl was welcome to live in his empty apartment while he was away traveling. Eventually, he came back to his apartment and Meryl never left. The two were married shortly thereafter and have been together ever since.

Literally everything these two do restores our belief in love, but just in case you need a specific story, this one from Dax should do the trick: "[Kristen] was doing a movie in Alaska and I was shooting Parenthood, and I couldn’t go, and she was going away for a long time. But then my schedule changed and I didn’t tell her, so I got the seat next to her on the airplane and then I sweet-talked the gate representative to let me on the plane early. So when she went to sit down, I was in her seat reading a newspaper, and she kept going, ‘Excuse me, sir. Excuse me, sir. I think you’re in my seat.' And then she noticed: 'Those hands look familiar,' and then she started bawling when she saw that I was on the flight."

These two fell in love while on vacation in Lake Como. During their trip, a tour guide took them to a spot on the lake and told them to make a wish. Chrissy wished that John would eventually become her husband. Six years later, the couple returned to the same spot — and got married there. This next story is almost too adorable for words.

Mila Kunis shared her very first kiss with Ashton Kutcher! It was on the set of That '70s Show! At the time, the two were just friends (and coworkers). Now, they're married!

These two have always been hardcore #CoupleGoals. After the two had their first child, Ryan had this to say about his love for his wife: "I'm not one for declarations of sentiment across the airwaves, but when we had that baby, I fell more in love with my wife than I'd ever been in my entire life. I couldn't believe it."

One of Hollywood's favorite long-time couples, Rita and Hank have been married for 30 years. Tom actually credits his love for Rita for some of his most memorable roles, saying: "I was able to construct a number of things in Philadelphia because of my relationship with Rita. The way my character felt about his lover is the way I feel about mine. The same was true when I played Forrest Gump, who loved Jenny. Without my connection with Rita, I don't know how I would've been able to connect with what Forrest was going through."

Neil Patrick Harris was walking down 9th Avenue in New York City one night when he bumped into his friend Kate. She was hanging out with her friend, David. At the time, David was in a relationship with someone else, but Neil says he waited in the wings, hoping for the stars to align. Eventually, they did, and the two began dating. Two years into the relationship, the couple was in a limo headed for a casino when David asked the car to stop. He then proposed to Neil — on the very same street corner where the two had first met.

Lauren Morelli was a writer on Orange Is the New Black — she was also married to a man. While working on the project, she began to question her own sexuality, which eventually led to she and her husband getting a divorce. Lauren didn't have many gay female friends at the time, so she began confiding in Samira, and the two fell in love! Three years later, the two got married. This next couple has definitely brought sexy back.

Justin Timberlake can't believe how lucky he was to find Jessica Biel. Here's what he had to say on the subject: "Every once in a while I can catch a glimpse of her when she doesn't see me looking, and I have this moment where I'm like, 'If you never make a good decision — if you only make bad decisions for the rest of your life — you made one really good decision.' It's nice to marry your best friend."

These two met at a party in 2002. Before getting married, Isla spent three years studying so she could convert to Judaism. "I will definitely have a Jewish wedding just to be with Sacha," she said. "I would do anything – move into any religion – to be united in marriage with him. We have a future together, and religion comes second to love as far as we are concerned."

John Krasinski was actually a huge fan of Emily's before the two had even officially met. He says that he had seen The Devil Wears Prada more than 75 times!

George and Amal met in 2013 when a mutual friend stopped by Clooney's Lake Como home with Amal in tow. As luck would have it, George's parents happened to be visiting their son that same day, so Amal met her future in-laws at the same time she met her future husband. Before Amal arrived at the house, George got a call from his agent, who said, "I met this woman who's coming to your house, who you are going to marry." And he did!

Sarah and Matthew dated for five years before finally getting married in 1997. "I never thought about a wedding dress. Never. Had not one daydream about it," Sarah says. "At one point I just simply remember thinking, ‘God, I really hope he asks me to marry him.’ I don’t know when or why. It was fairly early on." This next couple will give you all the heart eyes!

When the two first met (backstage at an awards show), Portia was absolutely smitten. "She took my breath away," she said. "That had never happened to me in my entire life, where I saw somebody and experienced all of those things you hear about in songs and read about in poetry."

Believe it or not, these two actually met on a blind date in 1993. They were married only 10 months later in November!

After going through two divorces, Goldie Hawn vowed that she'd never get married again. And she didn't! Despite not officially "tying the knot," Goldie and Kurt have been together since Valentine's Day in 1983.

Oprah and Stedman have been together for 32 years. Oprah says that when has to be away from her partner, she turns to her iPad, where she keeps a list of things he's said to her for motivation. "He's the most positive person ever," she says. "He's the most extraordinary man." Also, she calls him "Honey Graham." Come ON!

Bono and his wife Ali were actually childhood sweethearts. They met when Bono was 15 and Ali was 16 at Mount Temple Comprehensive School. They got married in 1982 and have been together ever since. Share this with someone who could use a reminder that love is real!