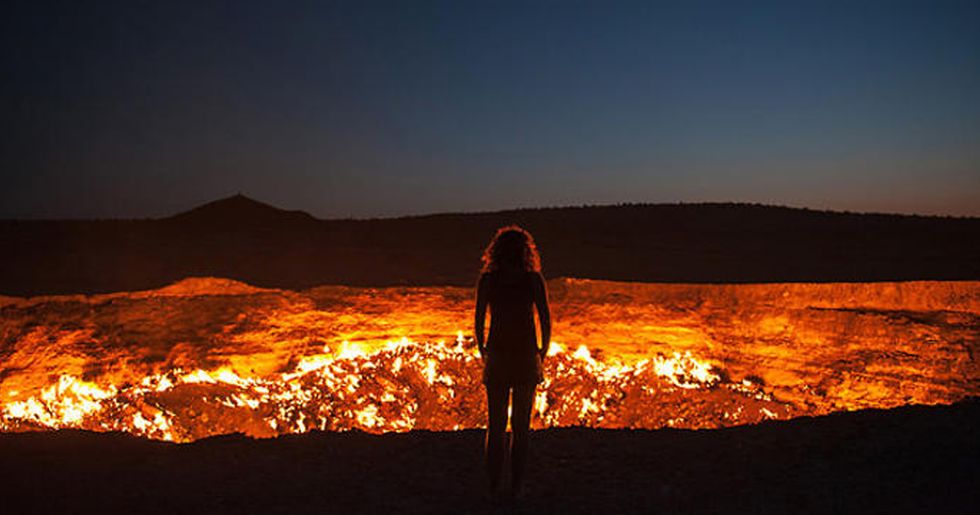 30 Terrifying Facts About the Most Dangerous Places on Earth

What constitutes a dangerous place? There are plenty of factors; risk of natural disaster, crime rates, coping responses, and proximity to dangerous flora and fauna are among them. We always hear about the best places to visit and the most beautiful places on earth. How about the opposite?

In this list, we explore the most perilous places on earth. Not to mention the spots that are both: as gorgeous as they are deadly. Our planet never fails to surprise us, with incredible sights—and dangers—on every continent.

Exploding lakes, volcanic deserts, and an ever-burning crater are only the beginning. Read up on these 30 insane and dangerous places in the world, and prepare yourself to be amazed!

Don’t take a dip in this lake.

North Tanzania’s Lake Natron looks and acts a lot like a lake of fire. The lake’s high levels of natron (sodium carbonate decahydrate) make its waters corrosive to human skin and eyes, sometimes reaching a ph level of over 12. The lake also contains red-colored bacteria, resulting in its unique pink-red hues.

Norway is home to the world’s strongest whirlpool.

The world’s strongest maelstrom can be found in Saltstraumen, Norway. The event takes place four times a day, at each high tide, and thousands of tourists come out to see it. Understandably, it’s been labeled an extremely dangerous travel route for hundreds of years.

There’s a reason we call it ‘Death Valley.’

Death Valley is an actual desert valley on the border of California and Nevada, with extreme heat and dangerous flash flooding. It’s one of the hottest places in the world; during the summers, temperatures there are only matched by some deserts in the Middle East and Africa.

Desert + volcanoes = too much danger.

The Danakil Desert in East Africa makes for one of the world’s most hostile environments. With temperatures regularly surpassing 50 ºC (which is 122 ºF), volcanoes, and geysers which spew toxic gas, the Danakil Desert is not a place to be entered lightly.

Now for the exact opposite: Oymyakon, Russia.

The Russian village of Oymyakon is home to about 500 people, and it’s one of the most frigid places in the world. It’s even got the lowest recorded temperature for a place permanent inhabited by people, at -71ºC (-96 ºF). Yikes!

Brazilian island Ilha da Queimada Grande has another moniker: Snake Island. There are so many venomous snakes living there that visitors are prohibited. It’s the only habitat in the world of the golden lancehead viper, an extremely poisonous type of snake. Good thing they’re comfortably cut off from the rest of us!

After 200 years of being dormant, Indonesian stratovolcano Mount Sinabung has been regularly erupting or threatening to erupt since 2010. Its most recent eruption took place in April of 2018, only the last in a string of incidents.

The Sahara is dangerous—but its neighboring region is even more so.

The Sahel region is made up of the area between the Sahara desert and the Sudanian Savannah. The land is extremely hot and gets very little rain, and with its overpopulation, that has lead to famine and mega-droughts.

The land of the dingoes is quite daunting.

Fraser Island, located off the coast of Queensland, Australia, is home to some of the last pure dingoes. They’re protected animals—but when malnourished, have been known to attack tourists. Not to mention, the island also contains dangerous snakes, crocodiles, and sharks in the ocean. Watch your step!

Pretty sure we already knew Antarctica was dangerous, but here’s a specific point:

Cape Denison in Antarctica is known as the windiest place on Earth. Its roaring kabatic winds can gain a force more powerful than hurricanes, which is why a visit to Cape Denison would be strongly discouraged.

Ever seen a nuclear town?

Up until 1968, the USSR mined uranium in Kyrgyzstan—the town of Mailuu-Suu. The town’s tailing pits were later abandoned, leaving the area exposed to radioactive waste. As of 2006, the town has been one of the most polluted sites in the world.

The Philippines have a lot of potential for earthquakes.

Eight of the ten cities most at risk from natural disasters in the world are located in the Philippines. The risk of earthquakes, landslides, and typhoons is quite regular.

No, really. The Darvaza gas crater in Turkmenistan is nicknamed the “Gates of Hell." It’s a natural gas field inside of an underground cavern; geologists set it on fire to prevent the spread of methane gas, and it’s been burning since 1971. The surrounding area is a popular camping ground—where else in the world can you say you’re standing at the gates of Hell?

Namibia’s Skeleton Coast is littered with just that.

Along Namibia’s Atlantic coast, you’ll find a stretch of land called the Skeleton Coast. Namibians call it “The Land God Made in Anger," for good reason: it’s inhospitable and famous for the number of shipwrecks it has claimed. The wreckage of old ships along with whale and seal bones are scattered around the area, having claimed many marooned sailor’s lives in the past.

Let’s talk about the Bermuda Triangle.

If sailor’s lore is anything to go by, the Bermuda Triangle is one of the most feared areas in the world. The Triangle can roughly be described as the expanse of ocean between San Juan, Puerto; Miami, Florida; and Bermuda. Of course, many ships and airplanes (both commercial and industrial) travel this area today. However, a string of mysterious disappearances there has led people to speculate on everything from magnetic force to the lost city of Atlantis. While most cases can be explained logically, there are a couple of strange outliers.

Politically, North Sentinel Island is one of a cluster of islands belonging to India. However, you’d be hard-pressed to call this island truly a part of India, or the world as a whole, considering the harsh stance its native residents have towards outsiders. They reject any and all contact with others and even killed two Indian fishermen in 2006 who drifted too close to the island. The Indian government did not try to prosecute the deaths and has established a 3-mile exclusion zone around the island.

Tragedy occurred at the exploding lake of Cameroon.

Cameroon’s Lake Nyos is one of three known “exploding lakes"; it sits above an area of volcanic activity, and carbon dioxide leaks from the ground. When the lake has a limnic eruption, the gas bursts out in a deadly cloud and suffocates anything living in the area. In 1980, two eruptions killed 1,746 people and 3,500 livestock.

Keep an eye on the volcanoes.

The Vanuatu archipelago in the South Pacific is considered one of the countries at highest risk of natural disaster. The islands were formed through volcanic activity, therefore their geography allows for volcanic eruptions and earthquakes.

Northern Ethiopia was home to the hottest inhabited place on Earth.

Dallol, Ethiopia is now a ghost town, but in the past served as a prime mining locale for multiple substances. The average temperature there is 35 ºC, and with patches of land emitting toxic gas and water that is highly salty and acidic, it’s a hard place to live.

One of the Caribbean’s largest countries is also its most at risk.

Haiti faces a regular barrage of hurricanes and experienced a horrific earthquake in 2010. The country’s instability makes protecting its citizens from these disasters a difficult task, leaving Haiti vulnerable as one of the most dangerous places to be during a natural disaster.

The Tsingy de Bemaraha Strict Nature Reserve, in Madagascar, is definitely somewhere you need to watch where you step. While it’s home to a number of exotic wildlife, it is also defined by its unique geological structure. Sharply pointed formations of limestone fill the area, and they’ll cut through machines and skin alike.

Naples, Italy is surrounded by volcanoes.

An eruption at Naples could put millions of people at risk. I Campi Flegrei (the Phlegraean Fields) is a large volcanic area outside of Naples; Campi Flegrei has not erupted since 1538, which means the likelihood of an eruption—soon—is high. Also, guess which notorious volcano rests on the other side of Naples? Mount Vesuvius, the destroyer of Pompeii.

In 2011, following a powerful earthquake and tsunami, the Fukushima Prefecture in Japan suffered an explosion at its nuclear power plant. High levels of radiation are still found at the site, which makes it an extremely dangerous place to be.

Guatemala is dangerous for multiple reasons.

While it’s true that Guatemala has a relatively high crime rate, its location is the true danger. The country’s geographic position and topography make it prone to earthquakes, hurricanes, and mudslides; in 1976, an earthquake killed 23,000 people there.

The Amazon rainforest is as dangerous as it is beautiful.

Manaus, Brazil is located right on the banks of the Amazon river, which is home to all manner of dangerous creatures. Take a dip in the Amazon at your own risk; it contains anacondas, piranhas, spiders, electric eels, and sharks.

In Arizona, the Antelope Canyon sees some wicked flooding.

Navajo Native Americans who live on the land refer to Antelope Canyon as “the place where the water runs through the rocks." The canyon, while it makes for beautiful sight-seeing, was formed by (and continues to have) flash-flooding. Deaths have resulted from the floods before, though thankfully not since 1997.

The Blue Hole of Dahab has claimed many diver's lives.

Blue holes are essentially deep-reaching marine caverns or sinkholes that usually give way to underwater cave passages, and the Blue Hole of Dahab is one of the world’s biggest. In the last several years, it is probable that over 200 divers lost their lives in the hole—although officially, it’s impossible to say for sure.

What town in the United States is our most dangerous?

This year’s study for NeighborhoodScout found the midwest city of Monroe, Louisiana to be the most dangerous city in the country. This ranking was made per capita, based on the number of violent crimes per 1,000 residents. So, while there are bigger cities with more crimes overall, Monroe’s crime to population statistics still say that the risk of being a victim of crime is higher there.

The Matanza River Basin is a bastion of toxic waste and disease.

For those who don’t know, ‘Matanza River’ literally translates as ‘Slaughter River.’ The Matanza basin is more or less a landfill; thousands of nearby industrial sites fill the river with petrochemicals, oil, heavy metals, and other waste. Needless to say, there is very little in the way of safe drinking water in the Matanza basin.

As of 2007, the average life expectancy of citizens in Dzerzhinsk was just over 40 years old. As one of the most polluted cities in the world, Dzerzhinsk was the dumping grounds for 300,000 tons of chemical waste—including deadly neurotoxins.