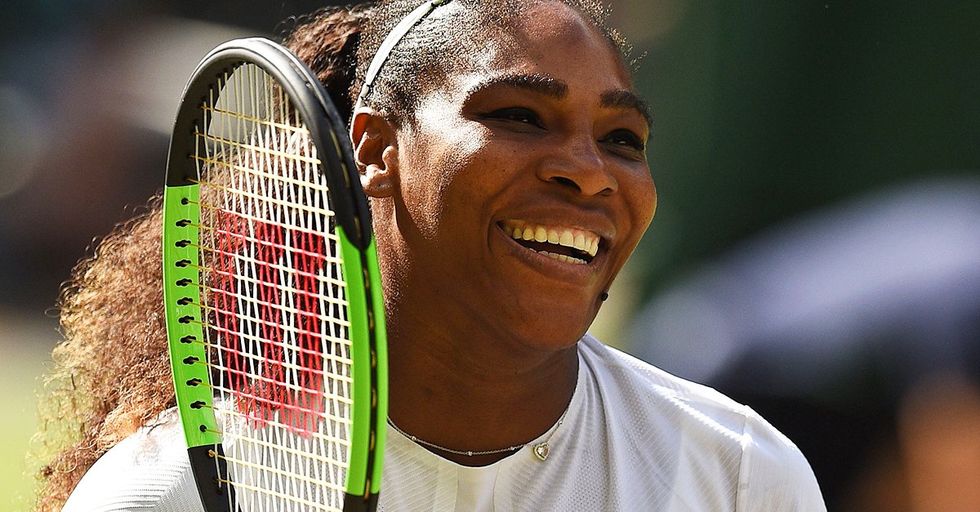 Who hasn’t heard of Serena Williams? Even if sports aren’t your thing, you’ve definitely heard Serena’s name associated with the best of the best in tennis. She is universally recognized as one of the greatest tennis players of all time, after all. More recently, she's also been in the news after having a precious baby girl (Alexis Olympia Ohanian Jr.) with husband and Reddit co-founder Alexis Ohanian.

So, whether you're familiar with her as a phenomenal athlete or a celebrity, there is plenty more to know! She's been making headlines throughout her career, since the early 2000s, and rightly so! After all, she first ranked number one in the world for female tennis players at the age of 20. Serena Williams is not only a record-shattering tennis player and mother; she's also an activist, humanitarian, and all-around incredible person.

Familiarize yourself with Serena's story, and check out these 30 facts you probably didn't know about Serena Williams!

She goes for gold.

You may have seen her on certain TV shows.

Serena has also acted, in shows like Law & Order: SVU, ER, and she’s even done a bit of voice acting in Avatar: The Last Airbender.

Her birthday is coming up soon!

She has two favorite animals, and they’re both great.

Tigers and dogs are Serena’s two faves. And we’re sure she’s the favorite of her little Yorkshire terrier, Chip! Next up, more on one of Serena's record-breaking successes!

Serena Williams was born in Michigan.

Saginaw, Michigan, to be exact.

Her skills have really paid off.

Serena was won more in prize money from her career than any other female athlete—over $84 million.

Serena and her mother are both Jehovah’s Witnesses.

Serena was raised as such, though she doesn’t follow every practice. She does often thank Jehovah after winning matches!

With all the traveling she does, she has a favorite city.

Which makes sense, as it’s where she found love!

Serena and her husband, Alex Ohanian, reportedly met at a hotel in Rome, back in 2015. How much work does it take to be number one? Find out on the next page!

Serena is the younger sister by fifteen months.

Serena has been playing tennis for a long time.

She started at age three—it helps that her father was a tennis coach!

She has an appreciation for other sports, too.

Her favorite sport to watch besides tennis is gymnastics.

In Common’s "I Want You" music video, she appears alongside performers Alicia Keys and Kanye West. Next, we've got more on Serena, from the strangest thing in her gym bag to the song that gets her through a rigorous workout!

The oddest thing in her gym bag is OPI nail polish.

Then again, she does have her own OPI line.

And the most embarrassing song stored on her phone is…

What gets her through a tough workout?

Cranking David Bowie’s “Fame." Sound advice for anyone putting together a workout playlist!

After beating Martina Hingis in the final, she got her first title at the U.S. Open.

Her favorite author is Maya Angelou. Next up, how Serena Williams is a multilingual powerhouse doing good around the world!

She’s got a go-to kitchen gadget.

Which is her toaster oven. Same, tbh.

Did you know she speaks French fluently?

Serena is even known to speak in French for her on-court interviews when she plays in France. C’est magnifique!

In 2008, she established the Serena Williams Foundation.

Her nonprofit was founded to help both American youth touched by violent crime and children around the world.

As such, she has helped to build a school in Uganda.

The Serena Williams Fund has funded schools in not only Uganda but Kenya and Jamaica as well. Not only can she break records, she can hold them for a long time! Read up on a few more career-defining moments Serena has had, on the next page.

There’s a reason she’s the best.

Serena had been ranked no. 1 for 253 weeks in her career.

She also hold a record for consecutive weeks at no. 1.

Serena is tied only with Steffi Graf for longest consecutive weeks ranked number 1, with 186 weeks.

Her favorite singers include Mariah Carey and Brandy.

In 2011, she was appointed a UNICEF international goodwill ambassador.

This surpassed Steffi Graf for the Open Era Lead! Share this story with anyone who ought to know a little more about our tennis queen!