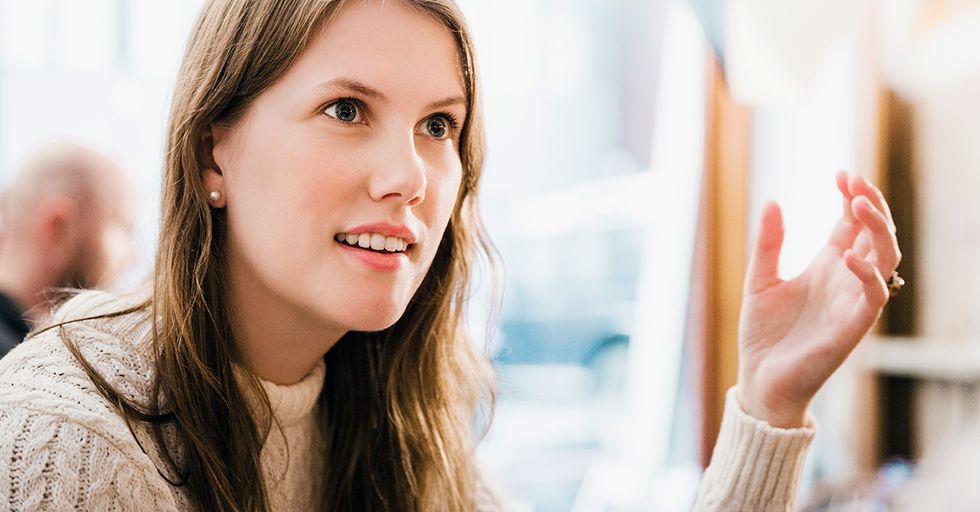 19 Facts That Will Absolutely Demolish Everything You Thought You Knew

You learn something new every day, right?

Well, not today. Today you're going to learn 19 new things.

And they're all gonna blow your mind.

So sit back, relax, and get ready for some trivia. (Feel free to use it to blow your friends' minds, too!)

Blind as a bat? Not quite.

There are more than 1,200 different species of bat in the world. And guess what? Not a single one of them is blind.

Wombats are about to become your favorite animal.

You might not have thought you'd be reading about wombat poop today, but here we are: Wombat poop is cube-shaped! Scientists aren't totally sure why, although they think it has something to do with marking their territory without having to worry that their "markings" will roll downhill.

There are more public libraries than McDonald's restaurants in America. That's gotta restore your faith in humanity a bit right?

That's a lot of travel!

It requires approximately 55,000 miles of bee travel to produce a single pound of honey. Can you bee-lieve that?! This next fact is for anyone who's looking to learn a little extra cash by pooping.

There's a stool bank in Massachusetts that pays volunteers up to $40/day for donating their poop. And to think you've just been flushing it all this time.

Do you love the Beach Boys?

The Beach Boys song "Never Learn Not to Love" was actually written by Charles Manson. (Yes, that Charles Manson.) Manson originally called the track "Cease to Exist," and it was much more bluesy than the version the Beach Boys eventually recorded. Next up is a surprising fact about bubble wrap.

Bubble wrap was originally invented to be used as textured wallpaper. The wallpaper never came to fruition, but its inventors discovered that it'd make a great packing material.

People who mention guacamole or chocolate in their dating app profiles receive more messages than people who don't. If you're using an app to find love, maybe it's time to talk up the guac!

The English language is a funny thing.

The plural of "beef" is "beeves." (Although who knows when you'd ever have to talk about multiple beeves...?) This next fact is about one of the most regrettable decisions in modern history.

Apple Inc. actually had three founders — Steve Jobs, Steve Wozniak, and a man named Ronald Wayne (pictured here in the center.) Wayne sold his share of the company back in 1976 for a total of $800. If he had kept it, it'd be worth more than $75.5 billion.

Nacho Libre — the film starring Jack Black — is based (loosely) on a true story of a Mexican priest who competed as a masked luchador for 23 years.

Maybe that's why it's called "Superior."

Lake Superior is huge. Like, probably way bigger than you thought it was. In fact, there is enough water in Lake Superior to cover the entire landmasses of both North and South America to a depth of 1 foot.

This math will blow your mind.

In a random group of 23 people, there's a 50 percent chance that two people will have the same birthday. (Try it next time you're in a large group of people!)

And speaking of mind-blowing math.

Get ready to see stars.

And another thing about trees!

Sharks existed on Earth before trees did! The earliest species we would classify as a tree lived around 350 million years ago. Sharks, on the other hand, have been around for about 400 million years. Take that, trees!

And for anyone who's afraid of shark bites...

You're 25 times more likely to be bitten by a New Yorker than by a shark. So if you really don't want to be bitten, you should probably avoid the ocean and the east coast.

Think you know Mary-Kate and Ashley?

Well, did you know that they're not identical twins? I bet not. They're actually fraternal twins — or, non-identical twin sisters are sometimes called — sororal twins.

3-D movies are older than you think.

In fact, the first one premiered in — get this — 1922! It was called The Power of Love, and it also had two different endings which viewers could choose between depending on which lens of their 3-D glasses they looked through. Share this with your favorite trivia buff!