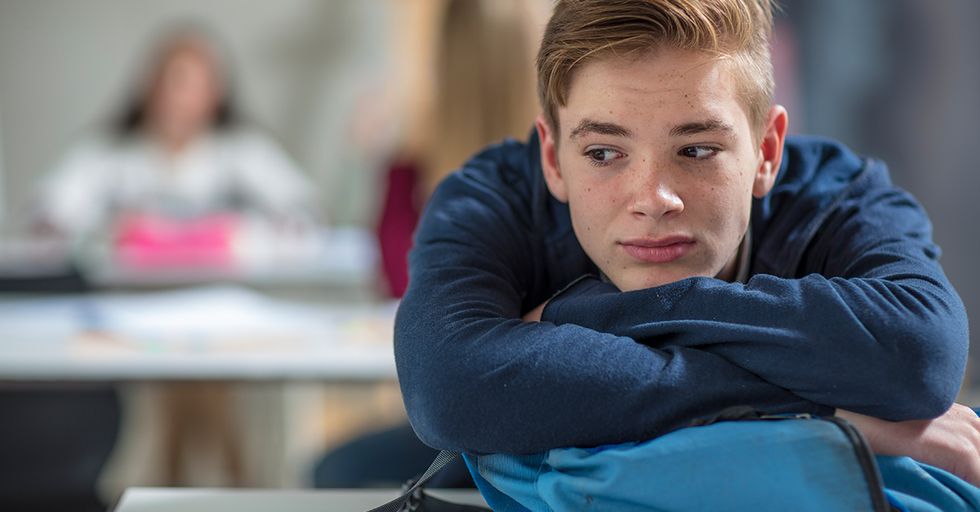 Remembering All the Fads That Got so Popular in School, Teachers Were Forced to Ban Them

Today schools look swept up in a world of fidget-spinners and mobile Fortnite. But schools have always had their no-nos. So what was considered contraband a decade ago? Or two? Or even more? Over the years, kids have developed some pretty crazy fads. And not just the well-known trends like cell phones and trading cards. We're talking some totally unexpected--and hilarious--habits that kids have developed to keep themselves entertained in school.

Because goodness knows that sitting through a whole day of classes without a distraction just isn't an option! And that's the way it's been for certain students regardless of the decade.

So keep reading to find out which popular stuff was just too unbearably annoying for teachers! Many of these will definitely surprise you! From gel pens and rubber bands to actual words, these are the things so popular that schools just had to ban 'em.

When I was in primary school there was this weird trend where all the girls would suck on the ends of gel pens so their tongues turned into different colors. They would trade pens with each other in the school bathrooms and sneak away from the teachers and go to hidden parts of the schoolyard so they didn't get caught, it was the closest I can think of comparing to a drug ring but imagine it with 7-year-old girls. -ChilloutBurner

They were so irresistible, in fact, that THIS happened:

One of my friends was really popular because she was the girl who sucked on the most pens and would get caught in literally every class sucking on a different gel pen, and the teachers would always have to walk her out to the nurse as she'd make herself sick and throw up. They eventually banned them.

I tried it once and spat it out immediately because it was nasty and tasted like ink (duh). I didn't get it then and I still don't get it now. -ChilloutBurner

When you accidentally form warring factions, "The Outsiders"-style.

In elementary school my class was divided into two groups: Penguins and rats. We would always go to our group for team assignments, for games, for anything really. Somehow an actual rivalry started to sprout until the whole school was divided into these two groups, with first and second years getting into actual fights and stuff. -Sat-jerker

The school knew better than to let that stand.

Pretty soon the principal canceled recess for a day and went to each classroom to tell us penguin team and rat team were banned. Others did create some smaller animal named groups after that but they all dissolved pretty quickly. -Sat-jerker

Camo colors. They somehow banned it school-wide because they were gang colors. Camo gang. -noobDMquestions

I went to high school in the southeast Columbus, Ohio area. Half wannabe rednecks, quarter wannabe hood, and quarter preppy kids. It was a dumb mix. And for the record, so many people complained the school actually had an assembly over it where they explained their reasoning and I don't remember exactly what they said but it had something to do with gangs. I think it was 'gang mentality' or something? -noobDMquestions

Kids are just jumping all over each other.

In Sweden we had this thing called böghög, translate to 'gay pile'. As soon as someone was on the ground lying, everyone threw themselves on making a pile of ppl -Antewalle

And turns out, it's a pretty universal thing.

In Australia that is called Stacks on. -Inky1895 We call it dog-piling in the US -hydrogen_bromide We did this in Germany and called it "Schweinehaufen", which translates to Pig Pile -YodaSwagJedi

Sometimes, the dogpile itself just isn't enough of a game.

There was a game called "Get Down Mr. President" where everyone in an area would put their fingers to their ears like the secret service and the last person to do it would be tackled. It could start at any moment and would end up in a dogpile in the hall. -party20barty

Surprisingly, this problem didn't come from a Canadian school.

We legit had a half an hour lecture in assembly because our year apparently said 'sorry' too often.

I was in middle school from 2009-2011. Bloons Tower Defense was huge. Everyone played it in any room that had a computer. The school had to install special blockers but people kept getting around them so they straight up banned adobe flash. -NordyNed

Some kids will go to great lengths to get their video games into school.

Someone at my high school managed to install Quake III Arena onto the central server, so it was able to be accessed by ANY computer connected to the network. There were kids in my web development class playing against other kids having their study hall in the library on the other side of the school. -Cnote0717

Sadly, it was not to last.

Not sure if the administration ever found out, but the year after I graduated they changed out all of the Windows computers they had for iMacs. -Cnote0717

There's a popular online game for every era.

We did that exact thing with Unreal Tournament and Soldier of Fortune 1. So many days of LAN UT. This would have been around 1999-2001, something like that. -Crotalus_rex

But plenty of games weren't digital.

When I was younger, we played this where you'd draw a circle on your hand, and other people would try to draw a line inside of it. If someone was able to draw a line in your circle, then you were out. The objective of the game was to be the last one standing. -BerlinChandler

Needless to say, this game got...competitive.

It was small at first, but eventually, almost everyone in my grade became involved and it spiraled out of control. Chaos. Pure f**king chaos. Kids were tackling each other, running away from other students, disrupting lessons, etc. Teachers eventually began to talk to us about how far our game had gone and started banning it altogether. It was fun while it lasted boys. -BerlinChandler

Reminds me of a really cool battle royale our school did during a school trip (We often had trips with the entire school, so it was grades 7-12, approx. 200 people). Everyone got a small letter with the name of a different student on it. You had to give that person an item. Any random thing, all that was important was that the item exchanged hands from you to said student willingly. -Mad_Maddin

You had to get tricky with it.

If you managed this, said student would have to give you their name. The students with the most name letters at the end of the week would get a price. Best game ever, so much paranoia, so much fake friendliness, etc.

For example: Someone gave out some sweets. Everyone took one, suddenly he was like "F**K YEAH". The entire point of giving everyone sweets was to get that one person who was in his vicinity to take one. If anyone asked you "Hey, wanna have a bonbon" everyone was like "Nope, forget it". Because they thought it was a poor attempt at them. -Mad_Maddin

These kids knew how to play hard.

I also remember having a letter suddenly come through the door addressed at me that said "Come to this and that room, at this time" and when I arrived it was my best friends who called themselves the Dark Brotherhood and made a plan where we would exchange letters to better plan our targets. -Mad_Maddin

This ban had some...weird reasoning.

Circa 2003, long skater hair was very trendy. Said kids were flipping their hair out of their eyes/face. An 8th-grade history teacher went on a vendetta under the reasoning that hair flips pollute the air with ‘hair dirt’. Kids started getting detentions. -shivercomplex

In third grade, a few kids got obsessed with the words cheese, FedEx, and camel. They said them all the time and those words got banned for the entire class. -olkdork

Remember when GameBoys were everywhere?

People bringing in their GameBoy Color and playing during recess. Kids were getting mad they weren't getting turns and they were afraid of someone stealing games. -jaseguitar

Kids weren't even using them to shoot at other kids or otherwise misbehave with them. Kids would buy packs of rubber bands, tie the rubber bands together, making like a big rubber band chain. It became a contest to see who could get a chain of rubber bands to stretch the farthest. -slider728

These kids went all in on the rubber bands.

You couldn't find a pack of rubber bands at a store for probably 20 miles (this was when I lived in a small town, so there wasn't a ton of stores in that 20 miles...Amazon or even public internet access didn't exist yet)

One kid got so many rubber bands, they could stretch it the length of the school building. -slider728

While stupid, I didn't think it was a bad hobby as kids weren't shooting them or shooting stuff with them. It was all about how big of a chain they could make. School rewarded our pointless creativity with a ban on rubber bands at the school. All rubber band chains were confiscated on site. -slider728

Yeah, this ban might be a problem for students, actually.

The school came up with an interesting solution.

They ended up banning rulers. At a school. The kids who were taking geometry that year and needed them had to be assigned rulers at the beginning of class and then turn them back in. -eatsgrass

Oh no, not the Capri Suns!

Capri suns - kids were too stupid to figure out how to get the straws in and teachers got tired of helping everyone. -middlesuspect

Down with the trading cards!

Fortune tellers: you know those paper origami ones, those

It wasn't hard to tell that cellphones were gonna be distracting.

I was in high school when cell phones finally became accessible enough for MOST people to have one. It took about a week of senior year for them to declare that no phones were allowed anywhere on school property. -scottevil110

The school tried to help students be more responsible...but it kinda backfired.

The best bit was that the school gave out free condoms. They were fuelling the opposition.

After a week, there was a ban on condoms being out in public. Anyone seen with a condom that wasn't in their bag or blazer was immediately given detention. -run_fast-eat_ass

I remember in the '80s/early '90s when they got banned at my school. The rumor that went around the school was that somewhere some kid had sliced their finger down to the bone with a cheap imitation slap bracelet

And now parents all over the country were pushing back -Ron_Fuckin_Swanson

This kid knew how to hustle.

There was a kid in my high school who made probably around $500 in a month for making duct tape wallets. The administration found out but didn't ban the wallets, just banned "conducting business" on school grounds. -Cnote0717

I’m 60. When I was in 3rd-grade sunflower seeds were banned. I was told the teachers thought they were drugs. -tubewatch

When kids can't bring their Pokemon decks to school, this happens.

When I was in elementary school in the late '90s there was a fad where we would collect Absolute Vodka and Milk Moustache ads in binders (similar to pokemon cards). It was savage, kids would bring in magazines by the dozens and just strip out the pages with the ads on it.

School banned them because it was such a massive distraction. -cricket9818

Share these hilarious stories and compare them with your friends' school experiences!