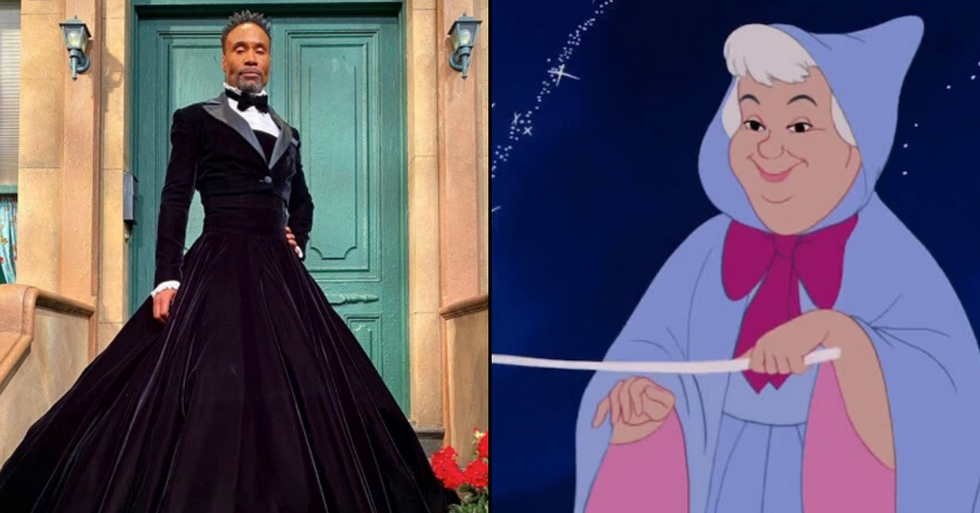 Fairy Godmother Will Be ‘Genderless’ in New Cinderella Movie

And now it looks like Porter has bagged another huge gig, confirming that he is set to star as the fairy godmother in the fourth upcoming re-imagining of Disney's classic tale, Cinderella.

Not only are we now even more excited for the upcoming movie, but it has been revealed that his character will be genderless.

The fifty-year-old first achieved fame by performing on Broadway... Most notably, he played Lola in Kinky Boots.

His role in the popular musical earnt him a Tony Award...

Pose focuses primarily on New York City’s African and Latino LGBTQ communities. Set in the 1980s, the show follows several queer characters in their journeys to becoming who they want to be.

With the show already paving historic paths of its own, it was amazing to see it being recognized at last year's Emmys.

He also went on to say this...

His looks never fail to make the headlines...

A few months ago, the star landed another huge gig.

He'll be joining the star-studded cast of the new upcoming Cinderella movie as the fairy godmother.

He'll be joining the likes of singer Camila Cabello...

The popular singer is set to take on the leading role of the orphan turned royalty, Cinderella herself... marking her big-screen debut.

News of the project first broke in April...

And as you'd expect, Cabello is also set to "be integrally involved" in the film's music.

According to Elle, Cinderella will be directed by Pitch Perfect writer and Blockers director Kay Cannon.

The star has a number of smash-hit shows under her belt, including Rent and Wicked. She's also the voice behind Frozen's Elsa.

Billy Porter was the final cast member to be announced...

And the star confirmed his casting during a panel at the 20th New Yorker Festival.

We couldn't think of anyone better for the role...

Given his previous award-winning theatre work, groundbreaking acting success and of course, showstopping red-carpet ensembles, there seems no one else that could bring the required flare and glitz to the job.

But his casting is also highlighting a bigger message...

In today's ever-growing "woke" society, it seems that when if you look back, many princess tales lack much-needed diversity, so it was about time that the classic childhood tale got more progressive.

It marks a new era of the princess genre...

His casting could have a significantly positive impact on kids watching, especially those little boys who may prefer princesses as opposed to action men or trucks. A fairy godmother brought to life by a gay, African American man, is a pretty powerful statement and an unapologetic leap in the right direction.

And to make things even better...

Porter has revealed that his version of the fairy godmother will be genderless.

A classic fairytale for a new generation...

Speaking to CBS News, Porter said, "It hit me when I was on set last week that how profound it is that I am playing the Fairy Godmother. They call it the ‘Fab G’." "Magic has no gender. We are presenting this character as genderless – at least that’s how I’m playing it, and it’s really powerful. You know, this is a classic. It’s a classic fairy tale for a new generation."

He believes that children are ready for this new generation...

"I think that the new generation is really ready. The kids are ready, it’s the grown-ups that are slowing stuff down," he said.

Make sure to keep scrolling to see why Porter wore a gown instead of a tuxedo to the Oscars...
20%