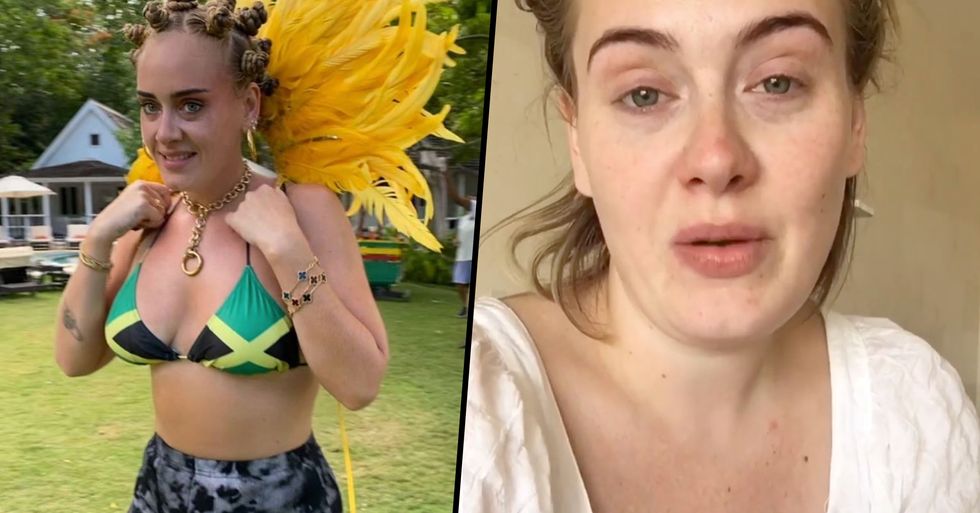 Adele appeared to break her silence over the whole "cultural appropriation" backlash after she posted a photo of herself wearing a Jamaican flag bikini. Although her 'response' seems to be a fake photoshopped joke, it certainly has the internet in stitches.

But this week, that all changed.

It all started when Adele posted a rare Instagram snap of herself at a carnival...

And after being slammed with a lot of criticism and accusations of cultural appropriation, the singer has now finally spoken out.

Over the last year, Adele has famously embarked on a body-transformation journey.

It all started when the singer was spotted at Drake's birthday bash last October...

And during her weight-loss journey, she hasn't really been very active on her social media... leaving us fans dying to see how she's doing!

However, last Christmas she posted this...

And when she posted this unrecognizable photo for her birthday in May...

She literally broke the internet.

The singer has clearly put in a lot of hard work to achieve her goals...

And fans are loving her rare, but magical, updates on social media.

However, it seems that Adele angered a lot of people this week with her most recent Instagram post.

The singer is usually very unproblematic, but it seems that over the weekend, she managed to really rile up fans. She wished her fans a happy (what would be) Notting Hill Carnival. The popular London event took place online this year amid the pandemic, but it didn't stop Adele getting all dressed up for the occasion.

And the angry comments well and truly came flooding in.

Here's the picture in question...

"Happy what would be Notting Hill Carnival my beloved London 🇬🇧🇯🇲", she captioned the picture.

And now, a user posing as Adele seemed to break the star's silence on the topic.

A comment appeared on an Instagram Live that was being held last night by singers, Brandy and Monica for the Versuz broadcast. The latest in the series, which was initially created as a virtual DJ battle by heavyweight producers Timbaland and Swizz Beatz, saw more than 1million people tune in.

It read, "Wah Gwaan! Yow gyal, yuh look good enuh," which is a common Jamaican greeting. Although this seems to be a photoshopped picture, and not actually Adele's response to the live stream, it certainly had the internet in stitches.

However, amidst this, many have noted that Adele was born and raised in Tottenham, which is an area strongly influenced by Jamaican culture.

Many have defended the singer for her attire at the carnival and believe there's nothing wrong with Adele embracing the culture she was brought up around.

And the witty little comment actually went down a treat with fans!

People thought the supposed 'response' was hilarious, and a very funny joke all round.

For more stories on the subject...

Keep on scrolling to read about the time Shia LaBeouf was accused of cultural appropriation for his most recent role...