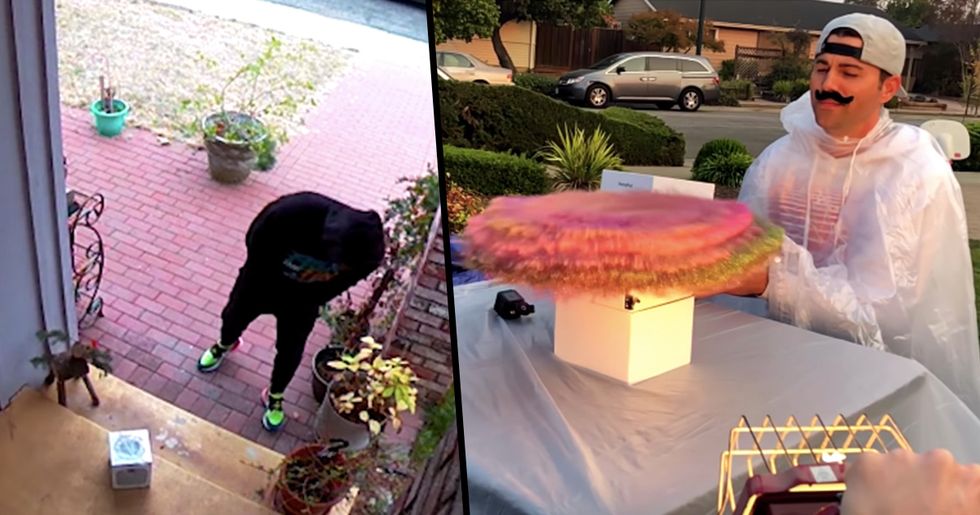 Being the victim of thievery is not a nice feeling or experience. Often the incident will leave you feeling violated and used. After all, a stranger invaded your personal space and stole your personal property, they’ve used you for their own gain. It’s a terrible thought, and often the police can do very little to help you, so you are also left feeling powerless and weak, when really all you want is revenge. Well this guy did get his revenge, after a package was literally stolen from his front door by a passing stranger.

Mark Rober was waiting for a package.

Recently, engineer and YouTuber, Mark Rober was waiting for a package. He received word that it had been delivered, but it had never arrived.

So he tried to find some answers.

Confused and frustrated, Rober went to his security cameras, to see if he could find a culprit.

When viewing the camera footage, Rober saw that it was a passing couple who came to his front step and stole his package.

And he wasn’t happy.

Obviously, Rober felt violated by the theft and went to the police with the footage.

But they couldn’t help.

However, the police could do very little for Rober, as the package would have been long gone by then.

But Rober couldn’t accept that.

Rober, left feeling powerless and defeated, decided to take action into his own hands.

And he decided to build something amazing!

Rober began to consider his options and decided to utilize his primary skill – engineering.

Rober had built strange contraptions before.

Rober had been known to invent whacky and quirky inventions before.

He once made a moving dartboard.

Being a YouTuber, he often shared his inventions with the world. Such as the time he made a dartboard that moved to get a bullseye every time.

Oh and he’s a space engineer.

Rober is also one of the engineers to have provided hardware for the Mars rover, something which took him 9 years to complete.

So he knew what he had to do.

So Rober put on his crazy inventor goggles and cooked up something that would have any thief running for the hills.

He decided to build a trap.

And in his genius, Rober decided to invent a booby trap for any future thief.

Here’s what he cooked up:

I mean, who else would have thought of this?

The fake package is truly an astounding piece of ingenuity, as it has many hidden layers behind it.

Let’s start at the beginning.

Firstly, the package has its own GPS tracker, so Rober can find it after it has been discarded by the thief.

And then there’s the glitter.

After it has been opened, the package then expels a cloud of fine glitter, coating the unsuspecting thief.

I mean, who wouldn’t love being covered in glitter?

But then there’s more.

Beyond the glitter and GPS, the package also has a built in can of fart spray.

Do you remember fart spray? That stuff smelt terrible, so imagine having that sprayed right into your face.

It also does it more than once.

The package is engineered so that the fart spray is deployed five times every 30 seconds.

Glad I'm not that person.

Being hit with glitter and fart spray, let’s just say I’m happy that I’ve never stolen anything in my life.

Not only this, but the package also has 4 smartphones built into its interior, each one filming everything that takes place.

And uploading it to the internet!

So not only are the criminals glittered, sprayed and filmed, but the whole experience is also then forever immortalised on the world wide web.

Rober we applaud you!

I think we can all agree that Rober is a true genius.

And I haven’t mentioned it all!

So vast is Rober’s genius, that I haven’t actually covered the tiny detail that makes this invention so astounding. So make sure you watch the video.

Obviously we don’t suggest trying to make one yourself.

Please remember that Rober is an experienced engineer and has the qualifications to invent such a device. Don’t try and make one at home yourself.

Also it may be illegal.

And I have no idea how legal something like this is, I’m assuming it does fall under some form of weapon, so maybe avoid trying it for yourself.

But still, this invention shows how clever Rober is and why he should really consider mass producing them.

Because you may be picking up one of Rober’s soon to be infamous booby traps.

So if you don’t want to be covered in glitter and smelling like a freshly released fart, try not to take things that don’t belong to you.