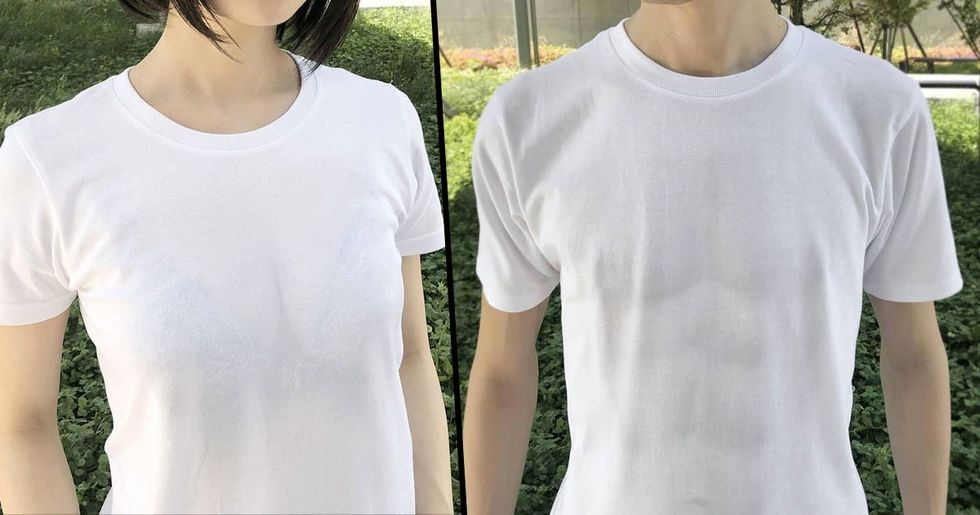 As summer fast approaches, many of us are fearful of baring our pale, hairy, winter forms to the whole world. In fact, the concept of our ever-imminent summer bodies is so universally accepted that it's almost become something of a meme. Many of us have started rejecting the trope entirely, taking an attitude of "the beach will get whatever body I give it."

But there's now an alternative for those who aren't feeling body confident, but want to look like they've spent the past six months in the gym. A Japanese company have created the product almost no one asked for - a t-shirt designed to look like translucent fabric draped across a figure which is, quite frankly, ripped. And while they're surprisingly convincing, we have to ask - would anyone actually wear these?

Think of a stereotypical "summer body" and you'll probably picture something like this.

But many of us feel like we're pretty far away from this ideal.

In fact, it's so distant from the majority of our realities that it's even become something of a meme online.

Trying to get a summer body ready in just a few months is basically impossible.

In fact, working on our summer bodies a few years in advance is starting to seem like a pretty good plan.

Although others have a different approach.

Perhaps the idea of a summer body is so far away, that we should all let go of our preconceived notions about what it means to have a physical form at all.

Or you could take a more pragmatic approach.

Perhaps the body you have year-round is an acceptable body for the summer season, too. Although, maybe adding in some margarita mix isn't a bad idea.

The very phrase "summer body" has started to have negative connotations.

Many online body-positive activists have taken over the tag to ensure that people don't let their body hang-ups ruin their time on the beach.

But, for those who want to fake the look, there has always been another way.

Sure, these t-shirts are more hilarious than hot - but they've been a wardrobe staple among those who favor a beach cover-up.

And they weren't just for a single gender.

There were options of this sort of "faux body" clothing for anyone who felt the need for it. But what if there was a better way?

A Japanese company has come up with a middle ground.

The results offered by these new "sheer effect" are surprisingly effective - and the internet is pretty into the idea.

The shadowy print is designed to mimic the translucence of a slightly damp t-shirt, put on after a day at the beach. And honestly? It's not bad.

There's an option for you, too - complete with heaving breasts barely encased by a bikini top.

Here's how they look on.

And the female counterpart:

Do you know anyone who would go for one of these? There's something oddly enticing about them.

We have to say, we're a little tempted.

But we have a better idea.

How about going for the shirt that is designed opposite gender that you present as? Now that's a beach body that will get you some serious attention. Keep scrolling for another truly amazing summer hack. Anti-Chafing Bands are a thing and they'll save your life this summer.