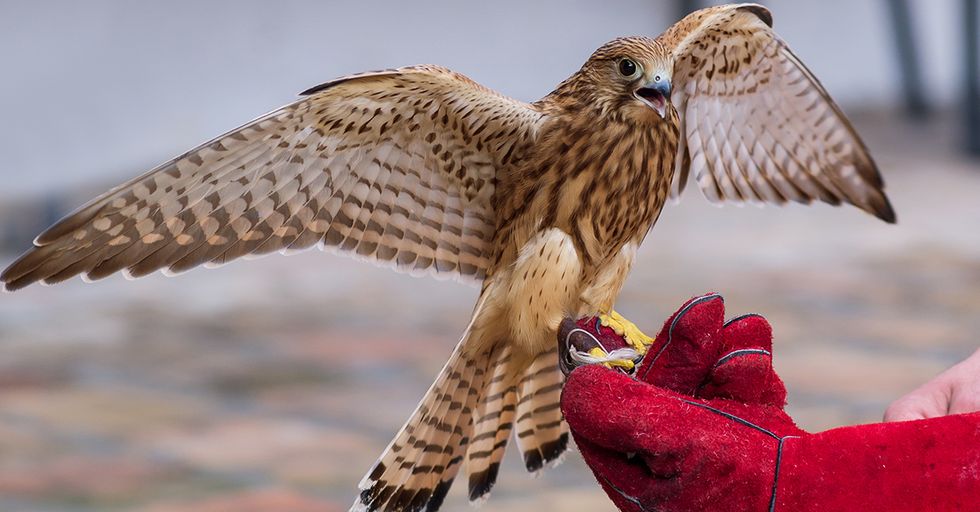 Or, to be more accurate, they have been using so-called "sex hats" to breed falcons. Are there better, less awkward solutions? Yeah, now. But back in the days of severe endangerment for some falcon breeds, those hats were the thing that stood between them and extinction. Sure, it's odd and kind of funny to think that 'sex hats saved a species – but still true!

Of course, that hasn't stopped the internet from going bananas over this revelation. Apparently, conservation biologists have been pretty good at keeping their unorthodox tools under wraps. But one Twitter account sent out a "true fact of the day," and then all of the Twitterverse was reeling from the discovery. So let's see what they're saying – and discover how, exactly, these strange hats became falcons' salvation!

And we know that scientists will come up with breeding techniques to facilitate the re-growth of an endangered species.

So, here's the deal:

It's official: we've found the weirdest animal breeding method ever.

That hat is the only thing standing between a humping falcon and someone's head.

So, this begs several questions.

@redfacts @icequeensansa But is there a specific reason for it being on their head rather than literally anywhere else
— Kennedy Cannon (@Kennedy Cannon)1550597268.0

You've gotta wonder, right? If the hat is what the Falcons are mating with, couldn't you put it anywhere?

Putting it on the floor does seem way more agreeable...and less terrifying.

Speaking of, why are the breeding tools *hats*?

@MichaelDBee @redfacts Why does it have to be a hat in the first place? (It's possible the article answers these… https://t.co/oZ3zHgcJj5
— Shanty Retweeter (@Shanty Retweeter)1550594343.0

Well, there's actually an answer to that question. Those conservation biologists are putting their heads out there for a reason.

Some people tried to guess.

Accidental euphemisms aside, that's actually not quite it! There's something else to this sex hat thing that makes it work.

For the answer, we refer to the EarthTouch News Network.

In this case, clicking the link is quite informative. Turns out, the falcon sex-hat (typing that will never be not weird) goes back all the way to the 1970s.

The hats have stuck around because they're effective.

Falconer Les Boyd invented the hat early in the '70s, as a sperm collection device that lets captive falcons mate with their keepers.

But, for all the strangeness, it's been instrumental in bringing some species of bird back from the brink of extinction.

For example, North America is home to the peregrine falcon.

Many living in North America are familiar with the bird. And now, you know that peregrine falcons are alive today because they were presented with a copulation hat and went to town.

Not so long ago, things were looking dire for the peregrine.

Back the Boyd first finished his invention, widespread use of a pesticide called DDT had nearly wiped peregrines out in the United States.

The numbers were grim:

The western population of peregrine falcons had fallen from around 4,000 breeding pairs to 324. That's just 0.08% remaining from the original numbers.

And now, things are much different.

The peregrine falcon has now spread in population to almost every continent, saved by the falcon breeding effort.

With the hats, breeding is actually simplified.

All that's needed is a male peregrine, a special hat, and a breeder who knows how to mimic a peregrine mating call.

Take it from Boyd.

"Learning to mimic the falcon’s vocalizations is the most direct approach in accomplishing cooperative artificial insemination," he explained.

And for all its strangeness, those hats save some trouble.

"The first bird I hatched using it was in 1975," Boyd said. "But I'd started trying years before. [Early versions of] the hat needed to be chin-strapped down tight before the male landed on it. Actually, one of the simplest ways to get the male to copulate was on the back of one's hand."

So, here's why the hat part is necessary.

Captive breeding seemed the most logical way to ensure success when trying to save the species. The only problem was that, when raised in captivity, the peregrine hatchlings would imprint.

Imprinting confused the birds a bit.

Birds visually imprint when they're very young, and that's where they gain their "sense of species." When they first hatch from the egg, a falcon imprints on the first living thing it sees. If that thing is a human...that's what the falcon sees as a parent. And later, that's what they expect in a mate.

By the time they became mature enough to mate, the Falcons had become so accustomed to humans that they weren't naturally mating with each other.

The falcons are coming to the person as much as the hat; the hat is just a mode of collection.

According to Boyd, imprinting smooths the process now.

"The imprinted males were extremely easy to work with," explains Boyd. "Once the semen was on the hat, it could be easily pulled into a syringe, and imprinted females would stand for semen deposit. It was incredibly simple."

So there's the science of it.

But this is the internet, so of course, a ton of sex-hat jokes ensued.

Gee, thanks for that mental image! At least it's still a catchy beat.

I mean, having a falcon land on your head is still neat. Maybe just clarify in the bio that your hat wasn't manufactured for copulation.

I can't tell if Sex Hat for Falcon would be a really NSFW alt-rock band, or a parody cover band.

In fact, a LOT of people saw the tweet and thought 'fun band name!'

Okay, okay, I can actually kind of hear the hardcore, but weird type of rock this would be. Gotta have pyrotechnics!

Never mind, OP's got this.

A lot of people have said "band name!" but personally I'm working up a blockbuster movie pitch about louchely charm… https://t.co/dF1appYmj1
— RedScharlach (@RedScharlach)1550604638.0

The single weirdest Bond-like blockbuster that would ever exist.

And yes, these hats are very easy to get your hands on.

You know, in case there's a need for a falcon copulation hat coming up in your near future.

And in case you're still attached to the band idea...

By the way, if you want to sing about falcon sex hats, my recommended tune is Crazy Horses by the Osmonds. 🎶 FAL-c… https://t.co/lXTwiabyLC
— RedScharlach (@RedScharlach)1550665594.0