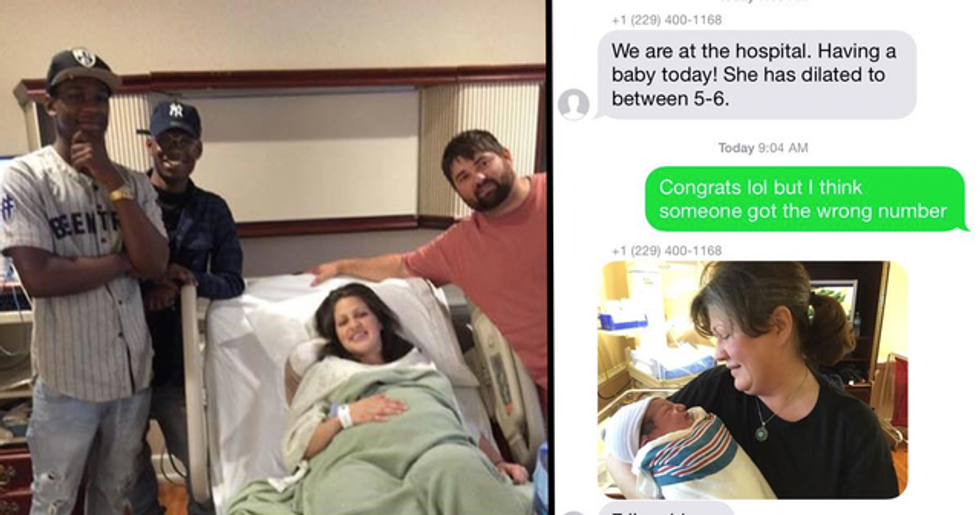 Family Accidentally Texts Baby News to Complete Strangers, They Pay Them a Visit and Bring Gifts for the Baby

Having a baby is a pretty momentous occasion, and news of the new arrival is often spread like wildfire across excitable family members.

One couple's news, however, spread a little too far when a random number was accidentally added into their family's group chat.

The mistaken number luckily belonged to a young Florida man, Dennis Williams, who decided to take it upon himself to do his good deed of the day by visiting the family with gifts for the baby, despite never having met the new parents before. So cute, I know.

Keep scrolling to read the full story and to see the heartwarming pictures of the strangers' unlikely friendship.

The birth of a baby is guaranteed to bring any family together.

Yep, as soon as your new addition has arrived, family members from all across the spectrum clamor to be the first to visit the little bundle of joy.

The attention can be a little overwhelming.

"Is it a boy or a girl?" "Did it hurt when you pushed a watermelon-sized baby out of your body?" "At exactly what time did you give birth?" "What's their star sign?!" The questions are endless.

And grandmas can be the worst.

Grandmas... we love you, but you have to admit that your type tends to be the fussiest and, generally, the most over-the-top when it comes to introducing the new addition.

This is where our story begins...

It all started with one excited grandma and a group chat. I know what you're thinking... a grandma and technology is a guaranteed recipe for disaster, right?

Not to one couple, apparently.

Lindsey and Mark Lashley, who were twenty-six and twenty-seven at the time, were overjoyed when their new baby, Cason Knox, was born in Bainbridge hospital in Bainbridge, Georgia.

And Mark's mom, Teresa, was given the responsibility of informing family members of updates and any other baby-related news.

I'm sorry, but who leaves grandma in charge of the group chat?

Teresa created a group MMS on her smartphone...

The group was made with the idea of updating several family members on baby-related news - including details of the baby's weight, dilation, and photos - all in one go. So far, so good... right?

Well, little did the family know...

That Teresa was accidentally updating a total stranger on the progress of the birth.

Though the random recipient was quick to give his congratulations...

He still pointed out that she may have added the wrong number. And, hilariously, Teresa didn't seem to notice his message, and simply replied with the baby's weight and a photo of her cradling her new grandson.

The number belonged to Dennis Williams.

And, amazingly, the twenty-one year old from Tallahassee, Florida, decided to take the opportunity to do something nice and asked for the room number so himself and "the boys" could bring a gift for the mother and baby.

And Teresa actually gave him the room number.

Okay, in this new grandmother's defense... Mark explained that his mother didn't actually realize that she was inviting a stranger up to the room where he and his wife were waiting with their new baby boy.

Teresa had added an old number...

And it turns out that Dennis' number used to belong to one of Mark's cousins. He explained to The Mail Online: "The reason it happened was my cousin had a new phone and I guess those boys ended up with her old number. She [Teresa, his mother] thought she was still talking to my cousin, that's who she thought she was talking to."

Dennis, accompanied by his brother Deorick, stuck to his word and arrived at the hospital bearing gifts for Lindsey and Cason.

And they even got the photo that they wanted.

Mark explained his shock at the pair's arrival: "It was different, I mean my friend just walked in and said: 'There are some more people coming down the hallway,' and we didn't know who they were and they said, 'Oh we're the ones who got the random text message.'"

And the family are grateful for Williams' kindness.

Though Mark admitted that he wouldn't have invited them over in the first place, he acknowledged their compassion. "I don't think we would have randomly invited them over but we appreciate it and the gifts. You don't hear about much compassion in the news anymore."

And Teresa was especially grateful.

And she admitted her error in an adorable Facebook post, which read: "I accidentally text a message about Mark and Lindsey having a baby to a number I had in my phone for someone else which now belongs to Mr. Dennis Williams and he and his brother came by and brought the baby a gift!"

She thanked Dennis for his generosity.

Continuing in her Facebook post, Teresa wrote: "What a blessing these two guys were to our family. They were so sweet and kind to do this! You 2 are great guys and thank you for giving to someone you didn't know! Many blessings I pray for you."

And people on Facebook were living for the story.

Many commented on how we don't hear enough positive stories like this one, and how the brothers did their town proud.

Some even noted how Dennis' gesture could benefit his love life...

Because come on. The ears of several single moms must have pricked up at this story...

Always double-check who you're texting, as you may end up with some surprise visitors at your important family events... and they won't always be as lovely as the Williams' brothers, trust me. Up for more stories about surprises that people have shared on the internet? Keep scrolling!