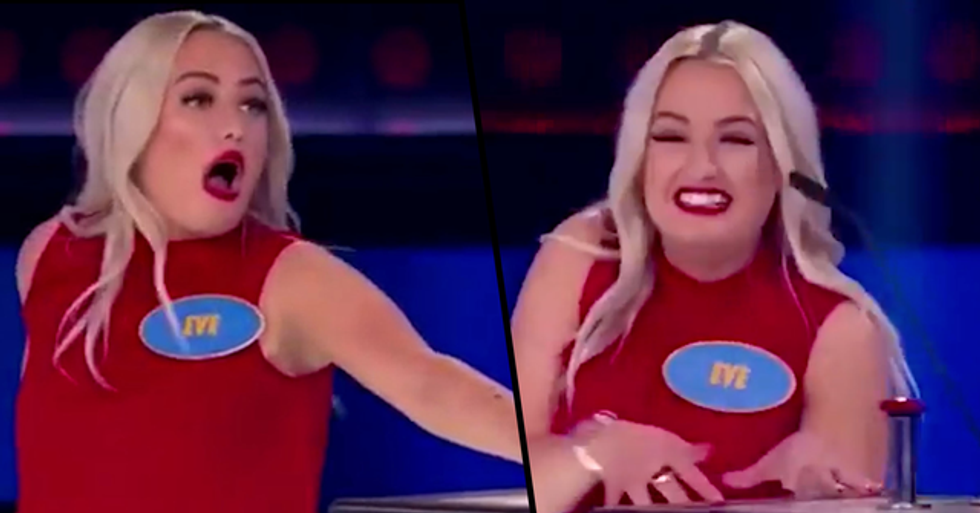 A contestant from the Canadian game show, Family Feud, has gone viral after her spectacular blunder lost her and her family out of winning the $10,000 prize. Ouch.

Keep scrolling to see the woman's hilarious mistake, and to hear how her luck has changed for the better since going viral...

We all love a good bit of Family Feuds.

Family Feuds, which is Canada's answer to Family Fortunes, features the same premise in which families compete in tough quiz questions and challenges together for money and other lavish prizes.

But this week, the show has been receiving a lot more attention than usual...

And it's all thanks to one contestant's spectacular blunder when answering a hilariously easy question.

Eve, from Manitoba, Canada, featured on the show alongside the rest of her family in an attempt to win money and prizes.

And both families had reached 300 points each, meaning they had to go to the "sudden death."

One member from each family was nominated to compete in the nail-biting round...

Which would see the winner take away a whopping $10,000 as a cash prize.

So, as you can imagine, tensions were high.

And, understandably, each family picked their nominee carefully... Because who wants to lose out on $10,000?

The families watched on with bated breath...

As the show's host, Gerry Dee, explained how the round would work.

It was pretty straight forward.

“Real simple," Dee said as a representative from each family arrived at the podium. "There’s one question - only one answer. Whoever gets it, they’re playing for $10,000, that’s it. Whoever gets it wins the game."

The contestants were ready.

And Dee wasted no time in launching into the fateful challenge - “Name Popeye’s favourite food."

Now, for most of us, this is a pretty easy question...

And Eve, who clearly thought she knew the answer, hit her buzzer instantly and excitedly shrieked out, "Chicken!"

She even gave a little happy dance alongside her answer...

All while Gerry, who was clearly aware of her grave mistake, stood with his head in his arms against the podium. If that isn't confidence, I don't know what is.

But, her happiness was short-lived.

Because it quickly dawned on her, mainly from the audience's laughter and her family's outrage, that chicken was, in fact, not Popeye's favorite food.

The priceless look of a dooming realization.

Her rival contestant swoops in with the correct answer...

"Spinach", he says triumphantly, while he jumps up and down with glee, all while poor Eve laughs nervously, explaining that, "I thought you meant Popeye’s Chicken."

We have to give it to her though...

She takes the loss of $10,000 remarkably well and shuffles back to her family, all while giggling and blaming the fact that she's blonde.

And, hilariously, Gerry himself launched into his own version of Eve's "chicken dance"...

I could watch that all day.

But people all over the world have been loving Eve's response.

Any blondes over here to back her up?

And some couldn't help but spare a thought for Steve...

What would he have thought of her disastrous answer?!

And others were simply living for Eve's energy.

The dance, the confidence... It's all very good.

Eve's dance is a complete mood.

You can watch the incredible moment for yourself here.

But it isn't all bad news for the Dubois family...

Yep, there's one major plot twist, and it involves a lot of chicken.

Popeyes has now addressed the incident.

And the fast-food chain has offered Eve a staggering $10,000 worth of free chicken from any of their franchises.

Go get your chicken, girl.

@PopeyesChicken @sublimevey you are absolutely adorable! Love your answer, so memorable. Go get your chicken girl!
— Lisa Hamilton (@Lisa Hamilton)1578767157.0

Is there anything else quite as pure as the gift of $10,000 worth of Popeyes Chicken? For more iconic game show moments, keep scrolling to read about a contestant on The Wheel of Fortune, who gave a little too much information about his marriage...