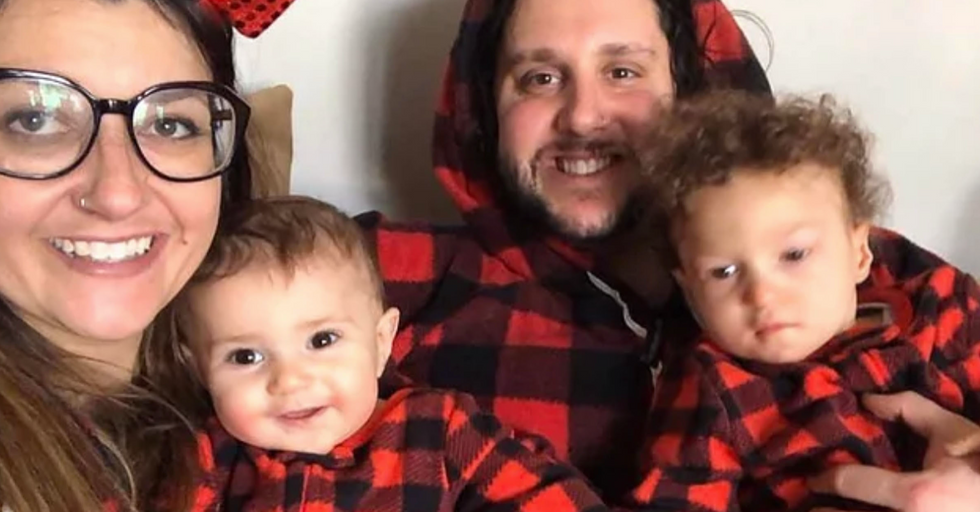 The current pandemic is hard for everyone right now.

Especially those who are tragically losing their loved ones to the virus.

One dad found a way to make it a little bit easier for his family after he passed, by leaving them a note.

His message is truly heartbreaking...

Never before has there been a worse time to lose a loved one.

Because of the ongoing medical pandemic, the way in which we grieve has been severely compromised.

The deadly virus has brought the world to a standstill...

And millions of us all over the world are having to remain in self-isolation within our homes.

And this means that we are unable to see our loved ones.

One of the most difficult aspects of this horrible situation is the ongoing separation from our family and friends.

These lockdown rules are preventing us from seeing anyone from outside of our own households...

Therefore meaning that we have to resort to more technological methods of staying in touch, such as telephone calls and video calls.

So far, these methods have proven to be effective for most.

But, in some more difficult scenarios, they can be utterly heartbreaking.

The attendance of funerals has been limited drastically, meaning that only immediate family members are able to say their goodbyes.

And, for those still in the hospital...

All visitors are prohibited, meaning that the majority of people dying are having to die alone, without their family and loved ones surrounding them.

Heartbroken families are instead having to remain at home...

With only their cellphones to hand.

So many families have had to make their final goodbyes over the phone...

It's a truly heartwrenching situation.

Which is why one man with a virus diagnosis wrote his family a letter.

Jonathan Coelho, aged just thirty-two, wrote the letter to his wife of 7 years and 2 children before he was intubated with the virus.

The letter was discovered by his wife Katie Coelho after he went into cardiac arrest and died on Wednesday.

A long 28 days after first being admitted and 20 days after being placed on a ventilator.

A GoFundMe page was set up to help the family in this hard time.

Katie shared an update to the GoFundMe page on Wednesday writing, "This morning unexpectedly Jonathan went into cardiac arrest and passed away."

It is not clear if the young dad had any underlying health conditions, but it came to a shock for the family as they thought that he had been getting better.

Katie also wrote, "He had been doing significantly better the last few days and we were given a very optimistic prognosis. The nurse told me she has no idea what happened and why."

Following Jonathan's death, Katie was able to sit with him in ICU and tell him how much she and the children loved him.

In the days following, Jonathan's phone was returned to Katie.

And it was when she turned it on that she discovered a note he had wrote from the day before he was intubated.

In his note, Jonathan wrote "I love you guys with all my heart and you’ve given me the best life I could have ever asked for. I am so lucky it makes me so proud to be your husband and the father to Braedyn and Penny."

"Katie you are the most beautiful caring nurturing person I’ve ever met.....you are truly one of a kind.....make sure you live life with happiness and that same passion that made me fall in love with you. Seeing you be the best mom to the kids is the greatest thing I’ve ever experienced."

He also wrote a section to his children, saying, "Let Braedyn now he’s my best bud and I’m proud to be his father and for all the amazing things he’s done and continues to do."

"Let Penelope know she’s a princess and can have whatever she wants in life. I’m so lucky... "

On the GoFundMe page, Katie added "The pain we are feeling is indescribable, our everything was stolen from us.

"My heart is not even broken it’s shattered. My kids and I will live the rest of our lives without Jonathan. And I don’t know how we’re going to do it."

A further update written on Thursday added, "Jonathan will be so desperately missed, he never held a grudge or judged anyone. He always greeted everyone with a huge smile and a hug. He loved life and was looking forward to watching his children grow up and growing old with his wife."

At the time of writing, the GoFundMe Page has raised $215,497. For more on the tragedies of the virus, scroll on...