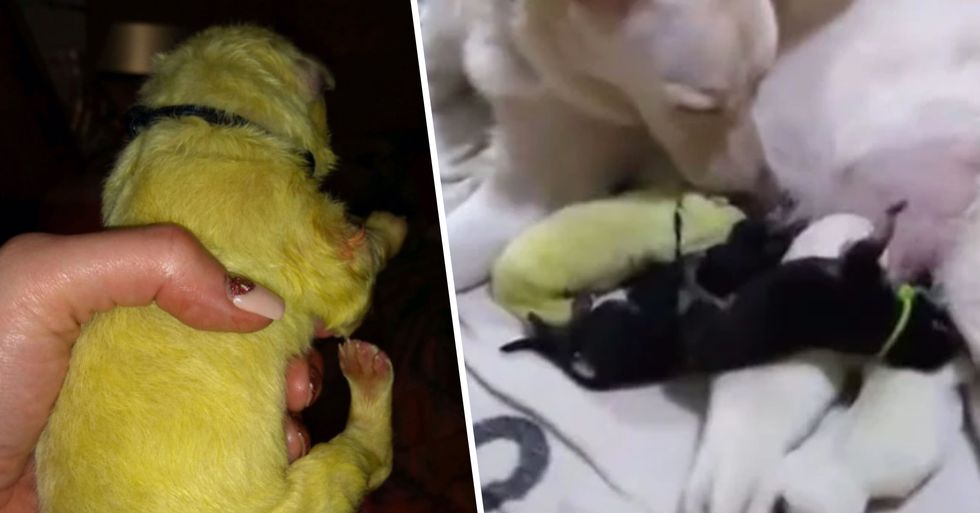 Dogs are man's best friend - but sometimes one particular dog really captures the internet's attention. Such is the story of Hulk - a newborn German Shepard puppy with a difference. Born this week, he's taken the internet by storm thanks to his strange hue. But in spite of his name, many think the puppy is actually yellow, not green.

Scroll on for what has to be the "dress debate" of this decade.

And it's not difficult to see why. These little bundles of joy are just so pure!

It seems the internet agrees.

In recent years, the amount of dog content online has grown exponentially. Maybe we need something wholesome since everything else in on fire?

But sometimes a particular dog story really takes hold of the internet.

And a recent dog who has gone viral may be the strangest looking pooch we've ever seen.

And people are feeling confused.

We've never seen a dog that looks like this before.

Because the pup has also sparked a huge internet debate - and it's that blue-and-black vs gold-and-white dress all over again!

The pup in question was born to in North Carolina.

All 8 puppies were happy and healthy.

And the family were all thrilled with the new additions.

But then they noticed something strange.

The fourth puppy to be born looked ... rather unlike his brothers and sisters.

"Then I realized the puppy was moving, and he was lime green," mom Shana told WLOS.

And they quickly came up with the perfect name for the pup.

"Hulk! It was lime green. He was super mad. So, yeah, he became Hulk. We thought about Gremlin, yeah, Pistachio. We call him Mr. Green sometimes."

Why does Hulk look so bizarre?

He apparently picked up the color in the womb - from something called meconium, or "infant mammal stool."

Essentially, he's stained with his own poop.

"The sack that they're in when they're in their mom, there can be meconium in there and that tends to stain them," explained Suzanne Cianciulli, a veterinarian technician at Junaluska Animal Hospital.

It won't be permanent, though.

"Mom licks it away until I bathe it and then, I guess after a couple of weeks, it will finally like fade out," said Shana.

Hulk is a totally healthy pooch.

The staining is just cosmetic, and soon enough he'll look just like his brothers and sisters.

But this dog has also caused some real controversy.

Because many are looking at Hulk and thinking one thing. He's not green!

In fact, many see his hue as a true bright yellow.

Which is certainly still unusual for a dog. But not as unusual as the claimed lime green, right?

People were quick to point this out.

Is everyone going crazy?

Although others said this.

Could it be that some people see him as green while others see a yellow pup?

In spite of looking kind of weird - and the fact it's for a pretty repulsive reason - Hulk is still undeniably cute. Fancy more cute dog content? Scroll on for one with a particularly adorable job.