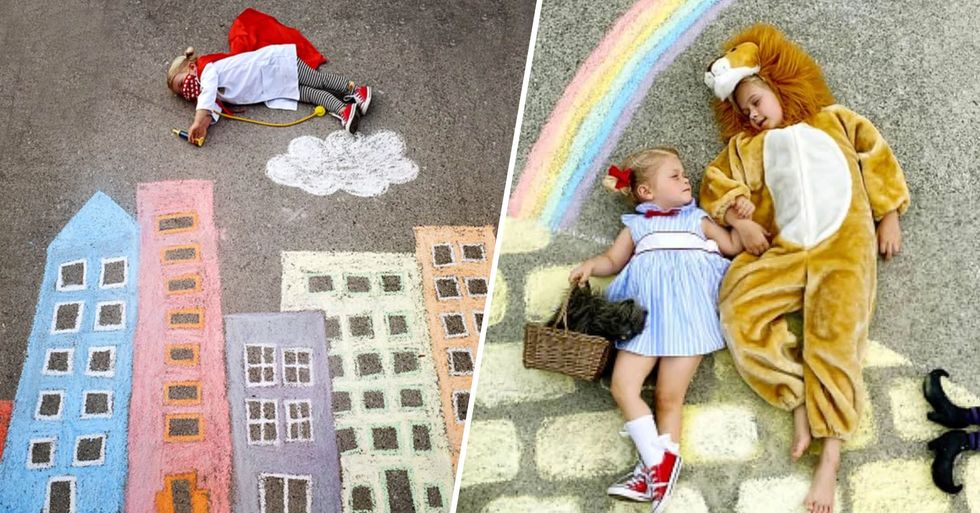 Family Use Chalk Art to Go on Adventures During Lockdown

A family has come up with the best way to stay entertained during the lockdown and it involves chalk and a lot of creativity.

Keep scrolling to check out some amazing artwork...

This global lockdown is proving difficult for all of us.

Thanks to the deadly pandemic, many parts of the world are now living in lockdown and it isn't fun... at all.

Staying at home is saving lives...

But this sudden change of routine is proving difficult for many.

Especially for families with small children.

The closures of schools all across the world - including here in the United States - has landed a lot of families in the sudden position to keep their youngsters entertained.

Many parents have been getting creative...

And one family in Atlanta have been entertaining their kids in the most colorful of ways.

Abbey Burns Tucker, who is from Atlanta, is a very busy mom at the moment.

She has 4 daughters between the ages of 2 and thirteen, so keeping them all entertained hasn't exactly been the easiest of tasks.

But a recent idea has proved to be very successful...

And all it involves is just chalk.

The girls have been getting creative with their chalk art...

And because Abbey is already interested in photography, she has been taking some incredible photographs of her daughter's artwork.

She positions her girls to make it appear that they are a part of the art...

As you can see here!

So how did Abbey come up with this amazing idea?

Speaking to Bored Panda, the mom admitted that it all started with just one simple drawing. "During the beginning of the quarantine, my oldest drew some balloons. I took a photo of my littlest in them and loved it."

It was a great way to keep the kids outside...

"Being outside almost every day, we started drawing more and more," Abbey explained. "We saw how everyone was really enjoying them and just kept going," she added.

She went on to reveal that the inspiration for different drawings came from a variety of sources...

"I have used the internet for some ideas, friends, and family have offered some, and others I just try to imagine what it would be like to go places you can only imagine right now."

On average, it usually takes around an hour or 2 to complete the drawings...

However, capturing the photograph itself can be much more difficult to complete.

It's all down to the kids themselves...

"The photo just depends on how the little one is cooperating," Abbey added.

Charlotte, one of her younger daughters, is the main star behind the creations.

"I love coming up with an idea, drawing it, and then seeing if it worked. The goal is for it to look like Charlotte is truly in these adventures."

People have been absolutely loving the family's creativity...

"The comments have been heartfelt and real," Abbey said. "I have seen lots better chalk art out there, but I think the added touch of my little one immersed in the adventure is what makes our art different."

Abbey has tried to make her creations as fun as possible...

And it's clear that the girls have been having so much fun taking part.

Her eldest daughter sometimes gets involved...

A great way to spend time with the family, we must say!

The cutest versions of Dorothy and the talking lion following the Yellow Brick Road...

But who those legs belong to continues to remain a mystery!

This is one of our personal favorites...

We must always remember to appreciate our essential workers during these difficult times.

Fun at the fairground...

Because we all have to make the most of what we've got during lockdown!

Not forgetting all of those graduates out there...

So many people have missed out on their graduation ceremonies, so here's Charlotte proving you can do it from home!

This truly goes to show that with a little creativity...

And a little chalk, anything can be possible!

Keep scrolling to read about why animals in zoos are now feeling lonely...