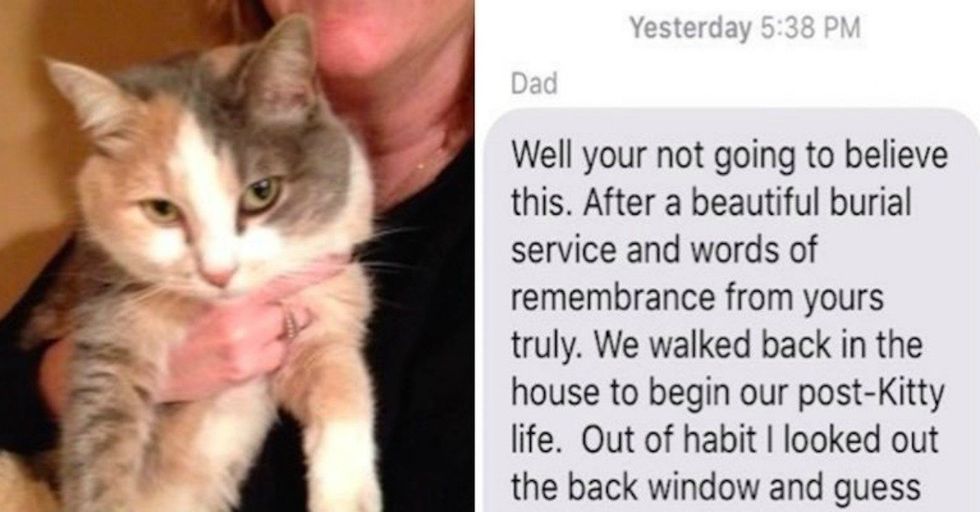 I once looked out my kitchen window and saw my mom and neighbor burying my neighbor's dead cat in my garden. The cat was wearing a sweater to "keep him warm in that big catnip plant in the sky."

That's why I relate to this story so much in that it also involves parents and a dead cat — kind of.

At any rate, Eric Schmidt's family went on a rollercoaster of emotion.

I mean, that's the effect family members can have on one another, good AND bad, right? As you'll see, they made the proverbial lemonade from the lemons life offered up.

Let's start this story with an unfortunate event.

The death of a pet is certainly nothing to trivialize. It's a cliche to say they're like family members, but it's true. They're with us every day, sharing a home as well as life experiences.

The Schmidt's story starts when the family cat went missing for a day. The family started to get concerned, as their cat (named Kitty) was never gone for that long.

They held out hope, but they knew something must have been wrong. Sadly, they were correct.

Eventually Dad had to text the sad news that their worst fears were true. Kitty the Cat had passed on.

Obviously people consider pets as family, so naturally, everyone was pretty broken up about it. It's just human nature to feel that way.

Kitty was a seven-year-old Calico, by way of background.

Seven years is a long time to spend with anything, especially a beloved pet. As the text above shows, Mom was taking the news as hard as one would expect. But the family's fortune was about to change in a drastic way.

I don't know about you, but it would be right around that point when I'd be locking all the doors and having traumatic Pet Sematary flashbacks, but this turn of events doesn't seem to phase Dad one bit. He just calmly assess the situation and wraps it up in a neat bow by declaring "All is better now."

Wait...WHAT? Kitty the Cat LIVES? This is glorious news for the Schmidt family and not-so-great news for some other family.

I WOULD like a photo. I think we all would. This is so darn strange that you'd have to wonder if there are other forces at play.

"I came home about 30-45 minutes after the burial, so I was still pretty emotional and trying to start dinner," said Eric's mom Cheryl Schmidt, "and my husband goes, 'I don't know how to tell you this, but we buried the wrong cat.'"

"She walks in and I'm crying and scoop her up in my arms," she continued. "Then we fed her and she promptly puked on the wood floor."

Here's a dramatic twist that you didn't see coming.

So, to recap, they dug up the other cat to see if it was chipped (nice gesture, to be honest) only to find out it wasn't a cat and was, in fact, a rabbit.

Hmm. Perhaps we were expecting someone to say something that results in "Oh, that's an understandable mix-up," but that's clearly not the case.

Was dad just looking for any dead animal he could find, convinced that it was the family's beloved "Kitty the Cat?" Do a little research, dad. Not a lot, but at least get the species right!

And even though she requested he not tell anyone, naturally he tweeted it out to the delight of the Internet.

But after all that burying and digging up of carcasses, all's well that ends well. Unless you're the rabbit.

R.I.P, rabbit. We hardly new ye. Seriously, we hardly knew ye to such an extent that we thought you were a dang cat.

There's a happy ending here for the family, but let's take a moment to mourn this nameless, feline-looking rabbit that perished in this saga.

Ok, now that the period of mourning is over, let's celebrate the life of Kitty, who didn't actually come back from the dead, but might as well have.

She was PRESUMED dead, then, strangely, confirmed dead, then alive and back with the family. Is that...a miracle? I don't know what to call that.

This may not have been divine intervention (more like human error, really), but it's still a happy ending.

Can we call this a miracle? Sure. The Vatican might not buy into that, but they're not here right now, so we're gonna go ahead and run with it. Welcome back, Kitty the Cat!
20%