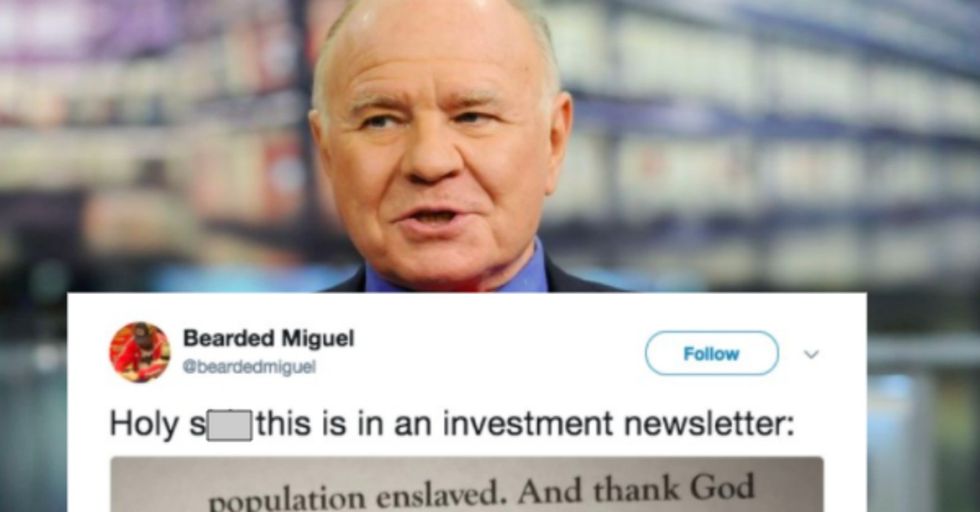 Is it just us, or do you also notice that racists feel emboldened these days? Maybe it's because we elected Donald Trump as our president, the same guy who has a long history of racism, the very man who refused to condemn white supremacists. That might have something to do with it.

But a silver lining in all this is that for now, overt racists (who aren't the president) are being punished for their awful statements. The latest one is Marc Faber, a famous financial pundit and investment newsletter publisher.

His latest newsletter was chock-full of appalling racist sentiments, ones that led to his resignations from several boards and his blacklisting from multiple news networks.

Marc Faber is the publisher of "The Gloom, Boom & Doom Report," a monthly investment newsletter.

But he's best known for his appearances on financial programs on networks like CNBC and the Fox Business Network. Now though, he'll always be most famous for the egregious racist remarks he made in the latest issue of his investment newsletter.

In his October 3 letter, Faber argued against the removal of Confederate statues, claiming that these men were "honourable people whose only crime was to defend what all societies had done for more than 5,000 years: keep a part of the population enslaved." But it gets worse.

"And thank God white people populated America and not the blacks," Faber continued. "Otherwise, the U.S. would look like Zimbabwe, which it might look like one day anyway, but at least America enjoyed 200 years in the economic and political sun under a white majority." We'll let you take a minute to check your phone. Yes, it's 2017. He went on, "I am not a racist, but the reality — no matter how politically incorrect — needs to be spelled out as well."

We know what you're thinking:

There's no world in which you can say things like that and then claim to not be racist. Faber finally conceded the point in a strange email to Bloomberg in response to the story: "If stating some historical facts makes me a racist, then I suppose that I am a racist."

One thing is certain, Marc Faber the racist won't be popping up on your TV screen anytime soon.

A spokesperson for CNBC told BuzzFeed News that it did not have a business relationship with Faber and "we do not intend to book him in the future." Fox Business Network said, "Faber has not appeared on the network often, and will not be on in the future," and Bloomberg TV came in with the final nail in the coffin: "He hasn't been on our air since June 2016 and we don't intend to book him in the future." Faber has also left the boards of Sprott Inc. and mining companies Novagold Resources Inc. and Ivanhoe Mines Ltd. “Ivanhoe Mines’ values of equality, respect, and dignity for all people are a fundamental underpinning of the company’s enterprise and the conduct of every aspect of its business," Ivanhoe said. “There is zero tolerance for racism."