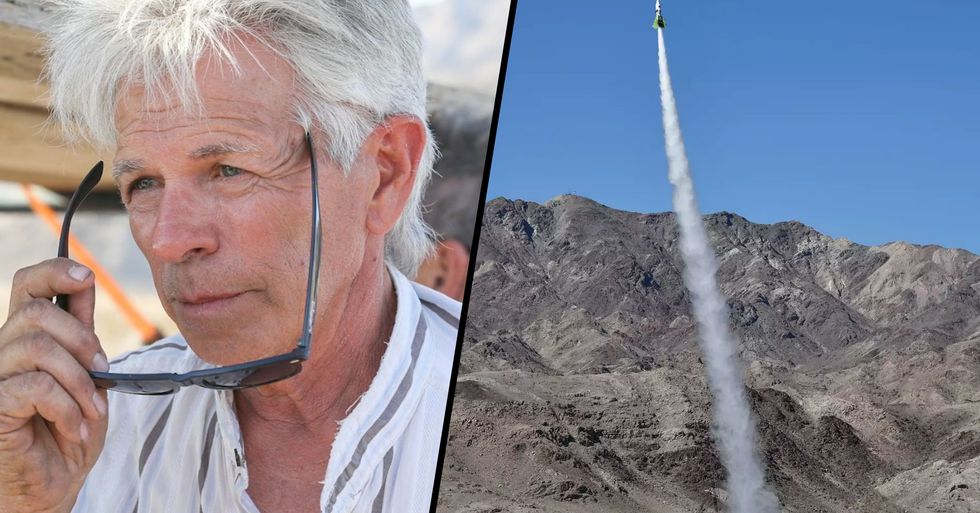 You may be aware that there a group of people who are convinced that the Earth is actually flat - otherwise known collectively as the "Flat Earthers."

These conspiracy theorists are known worldwide for their outlandish ideas and eye-brow raising theories. However, unfortunately, today, a man known as "Mad Mike" Hughes has died in a homemade rocket accident. Keep scrolling to find out more, and to watch the footage.

There are countless conspiracy theories out there.

There are a ton of people with some crazy ideas about how we are all being duped.

Obviously, Paul McCartney is not dead. He released an album called Egypt Station just last summer. In 2015 he released "FourFiveSeconds" with Rihanna and Kanye West. However, conspiracy theorists think that he died in 1966, 3 years before the Beatles disbanded. They have found their proof hidden in the Sgt Pepper's Lonely Hearts Club Band album, which they believe has loads of hidden messages about Paul's death. They even think that the other Beatles have been covering it up by hiring someone who looked and sang like it him. If that is the case, they certainly found a very talented doppelganger.

Again, it seems odd that people have come up with a conspiracy theory that is obviously false. But then that is the nature of these theories. There has recently been a YouTube video released which shows grainy footage of an eight-one-year-old groundsman. People believe that he gave them a sign by raising two fingers to his head, which proves that he is alive… This seems to be tenuous at best.

The moon landing was a fake.

In the 1960s, during the Cold War, the USA and Russia were heavily involved in a space race. They wanted to see who could get the furthest and who could be the best. When Neil Armstrong landed on the moon in 1969, the USA claimed victory in the race. But conspiracy theorists don't think that they really got there. They think it was faked. Even though 2 countries from opposite sides of the globe were involved in the race; even though there were several failed attempts; even though it is a fact, with photo evidence, they think it was fake.

The Queen's son is a vampire.

Prince Charles is a distant descendant of Vlad the Impaler, who was the inspiration for Bram Stoker's Dracula. Let's not forget, Dracula was a fictional novel written by Stoker in 1897. It was not a biography. However, this is enough for conspiracy theorists. They believe, despite evidence to the contrary, that Prince Charles is therefore a vampire; a mythical creature that cannot go outside in the light and likes to feed on human flesh. Sure, that seems likely.

But one of the biggest conspiracies right now is the fact that the Earth is flat.

So, with these other conspiracy theories in mind, let's look at another bizarre theory that some people actually believe in. They believe that the Earth is actually flat. As in, they don't think it is round. They don't think you can fly around it in a circular direction. They think it is flat and has edges.

There's no solid proof that the Earth is flat...

In the 19th century, a man without serious credentials named Samuel Rowbotham claimed that the Earth was flat. He ran away from some questions that he couldn't answer, he refused to take part in challenges and he lied when he finally had to do a test. Yet many people now, over a century later, still think that he could be right.

There's a heck of a lot of science that backs up the fact that the Earth is in fact, round.

It has been scientifically proven that the Earth is not flat. The moon is round, the sun is round, and so is the Earth. The Earth rotates on an axis, and the Earth rotates around the sun. You can even see shadows during a lunar eclipse that shows the Earth's round shadow. The shape is, you might say, a globe.

In fact, we have known that the Earth is not flat for over 2,000 years.

Aristotle realized that the Earth was round way back in 350 BC, when he wrote On The Heavens. He made the point that simply by observing the stars we are able to tell that the Earth is round. You can see this by the ways the stars move across the sky at night as the Earth rotates. Or the way you get different stars depending on if you are on the northern or southern hemisphere. A very good point.

The Ancient Greeks used a really simple test to prove it.

If you put a stick in the ground, then when the sun is directly overhead, there is no shadow. But at the exact same time in a city 500 miles north, there is a shadow. If the Earth was flat, they would show the same shadow. The Ancient Greeks managed to use the difference in the angles to calculate the size of the Earth. They got to within ten percent. That's a pretty good effort for over 2,000 years ago.

Have you ever seen a sunset?

The streaks of different colors in the sky at sunset can be breath-taking. But aside from their beauty, sunsets can also help you understand science. When you watch the sunset, especially near the equator where the sun appears to be bigger, you can see that the sun gradually disappears on the horizon. There is often a point where you can see half the sun, while half the sun has gone. Like when a child draws a sunset. This is because the Earth is rotating. In a funny way, it is actually the Earth that is setting, rather than the sun.

Many people mock Flat Earthers for the mere suggestion that the planet isn't round.

The Flat Earth Society (yes, there is a whole group of them online), actually posted this message on their own page.

However, unfortunately, a determined flat earth believer has passed away on February 22nd.

Michael "Mad Mike" Hughes died in a tragic accident yesterday afternoon while filming for the program Homemade Astronauts, which was due to be aired on the US Science Channel.

Hughes has been on a life long mission to prove that the Earth is flat.

Flying a steam-powered rocket, and aiming to reach 5,000 feet, Hughes had wanted to get as close to space as possible to prove that the Earth is flat.

He was assisted by his partner, Waldo Stakes...

However, the Sheriff's report has confirmed that the pilot is the only casualty at this time.

Footage shows a rocket shooting into the air before plummeting back to the ground.